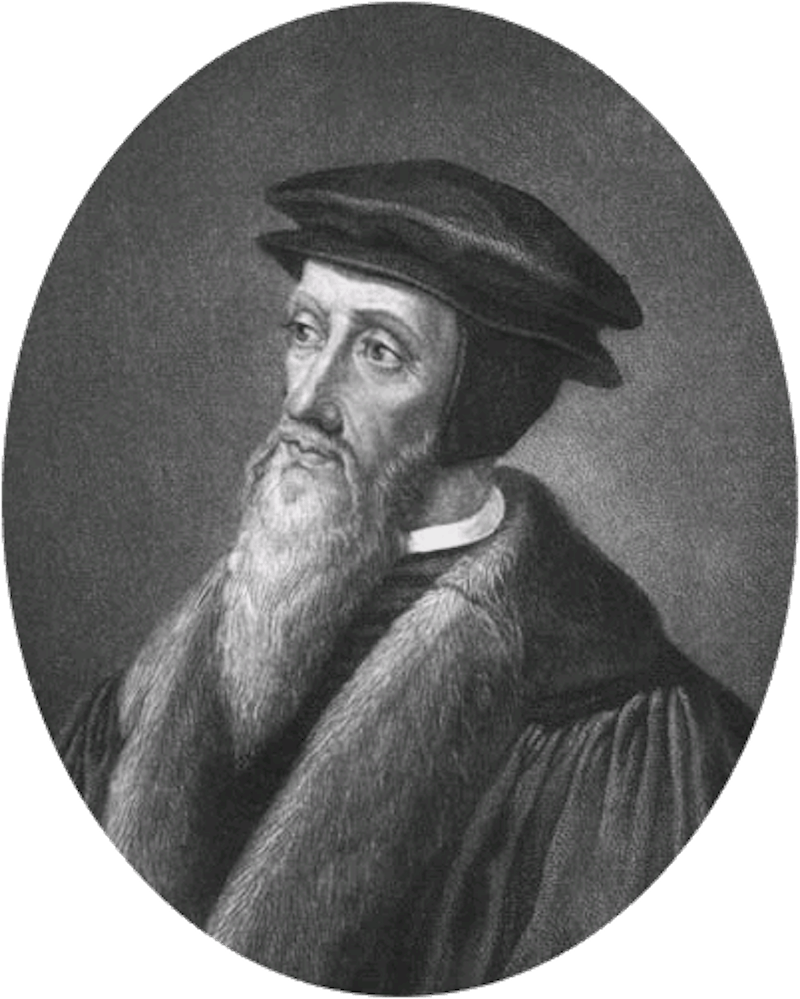 The problem with turning 500 is that you start to sound old. John Calvin, who was born 500 years ago today, will be remembered by many today as a dour old codger who loved to talk about sin and depravity, someone who was always in a bad mood. It's true that Calvin had his grumpy moments—although I probably would too if I suffered from constant intestinal disorders and a battery of other chronic ailments, as Calvin did. And it's true that Calvin spared few words when talking about the severity of our condition as a result of sin—though I don't think Paul or Augustine were much less blunt about our depravity. (The less said about the nasty names Calvin called the Pope, meanwhile, the better.)
I've been learning lately that Calvin actually lived, thought, and wrote with a palpable pastoral heart and a vivid vision of God's goodness and grace—and that without this part of the picture of who Calvin was, all you get is a caricature. In fact, when reading through Calvin's sermons and writings, you can't go far without finding a beautiful interlude like this one:
"The end of the whole Gospel ministry is that God, the fountain of all felicity, communicates Christ to us who are disunited by sin and hence ruined, that we may from him enjoy eternal life;  that in a word all heavenly treasures be so applied to us that they be no less ours than Christ's himself. ... by [the Holy Spirit] he joins us to Christ our Head, not in an imaginary way, but most powerfully and truly, so that we become flesh of his flesh and bone of his bone, and from his vivifying flesh he transfuses eternal life to us." ~ from "Summary of Doctrine concerning the Ministry of the Word and Sacraments"
Nothing dour there.
But even this passage makes Calvin sound a little stuffy —more scholar than preacher.  He was both, but you could argue he was a preacher first: he preached hundreds of sermons, even when illness was ravaging him, and always drew crowds. And he was never content to trade only in theological abstractions; in fact, arguably no one since Augustine cared so much about the everyday believer and her view and experience of God. Of course, preaching and singing in French to begin with, rather than Latin, was a major and controversial move to engage worshipers. But the French he did preach in, and write in, is probably second only to Montaigne in its rhetorical excellence.

"Calvin's language was picturesque, lively, and often earthy," writes Edward Dommen in John Calvin Rediscovered. "Much of his teaching was oral, presented to an audience that was in front of him. He used everyday popular language."

Sadly, most English translations hide the raw rhetorical power of Calvin under a blanket of dullness. Calvin has been translated almost exclusively by theologians, not linguists or rhetoricians, and the result is usually drab prose that is needlessly dense and tedious, with no rhythm to the rhetoric. This only fuels the caricature of Calvin as a stolid professor, rather than revealing him as a powerful preacher.

(By the way, I think it was Dommen who pointed out that "Institutes of the Christian Religion" is a poor translation of Calvin's original Latin title, Institutio Christianae Religionis, even though it seems pretty straightforward. And so my preferred English title, which is closer to what Calvin was trying to actually write, is Basics of the Christian Faith.)

About a year ago my friend Christian pointed this out and said someone should do a contemporary paraphrase of Calvin's magnum opus, Institutes of the Christian Religion, so that normal human beings could actually read it—as normal human beings actually did during the Reformation. Christian took a nice crack at the opening chapter (see an excerpt here), and I started in on my favorite portion of the Institutes, Calvin's chapter on prayer.I planned to make some good headway in this chapter in time for the big birthday year, but I've only finished a few paragraphs. But even this brief portion gave me a new sense of Calvin's joy and fervor in his faith and his preaching. I hope it conveys at least a fraction of Calvin's rhetorical flair, and doesn't dumb him down too much. (Incidentally, one thing I didn't "translate" was sentence length; Calvin would certainly break up his speaking and writing into shorter sentences and paragraphs for contemporary audiences, rather than stacking clause upon clause as he did in both Latin and French, but I left that aspect alone for now.)

Here's a portion of my paraphrase of Calvin's Institutes, Book 3, Chapter 20, paragraph 2:

Prayer is the way we can dig up the riches from God's treasure chest. It's how God and humans communicate with each other; it's as though we enter heavenly throne room, walk up to his throne, and remind God of his promises to us, so that when we need to we can know, through prayer itself, that what God says in the Bible is true. And so we can ask in prayer for every thing that God leads us to expect from him. It's as though the gospel is a treasure map and prayer the shovel to dig up the treasure. Words simply cannot express how important and enriching prayer is. God, our Father, says to us that our only comfort comes by calling on him, and for good reason, since by praying to God we call for the reality of his care and guiding as we walk along, for his strength to hold us up when we're so weary we could collapse, for his goodness to listen to us, sinful and miserable as we are. In short, by praying to God we ask him to make his complete, full, perfect self known to us. And so we receive peace and calmness as we lay before him the burden of our guilt, and we rest in the solid certainty that we can't hide anything from God, and that he wants to provide for us. Read more ...
Related Links
More resources for remembering John Calvin on his 500th birthday from the Calvin Institute for Christian Worship.
A brief biography of John Calvin from Calvin College.
Writings of John Calvin and guide to Calvin's Institutes from the Christian Classics Ethereal Library.
Calvinism in the Las Vegas Airport by Richard Mouw
Prayers of John Calvin from Reformation Ink
John Calvin entry on Wikipedia.

Nathan Bierma is an educational technologist at Calvin Theological Seminary and author of “Bringing Heaven Down To Earth: Connecting This Life to the Next.” His website is www.nbierma.com.