Editor's note: Agendas Aside, a Think Christian series on homosexuality and the church, also includes pieces by Neil de Koning, Joshua Walters, Glenn Goodfellow, Jason E. Summers and Josh Larsen. TC is a ministry of the Christian Reformed Church in North America. The denomination's position statement on homosexuality can be found here.

It was almost two years ago that a group of friends and I stood at the Chicago Gay Pride Parade to make a public apology on behalf of Christians for how the LGBT (lesbian, gay, bisexual, transgender) community had been mistreated. We called it our “I’m Sorry” campaign.

Our apology was never intended to make news, start a controversy or even start a movement at pride parades across the United States. It wasn’t making a theological statement on sexuality. We simply recognized that major wrongs and pain had occurred to the LGBT community and it was apparent that many Christians, including ourselves, were to blame. We realized that our actions, and even our inaction, caused people to be hurt, demonized and dehumanized. And, if we truly believed that God created all people and that they have inherent worth because they are created in God's image, then we needed to repent and apologize for the wrongs we committed to God’s children. We simply wanted to right wrongs. Standing with signs publicly apologizing, though humbling, seemed the right thing to do.

To this day, I continue to apologize to my LGBT friends when I hear their stories of pain, rejection or abandonment. People are still hurt by Christians. People are still angry with Christians and, consequently, angry with God. We continue to do our “I’m Sorry” campaigns at other pride parades throughout the United States. Apologies by Christians to the LGBT community, as was proven through the viral reactions of the "I'm Sorry" campaign and the “I Hugged a Man in His Underwear” blog post that followed, have the ability to bring healing, hope and reconciliation. 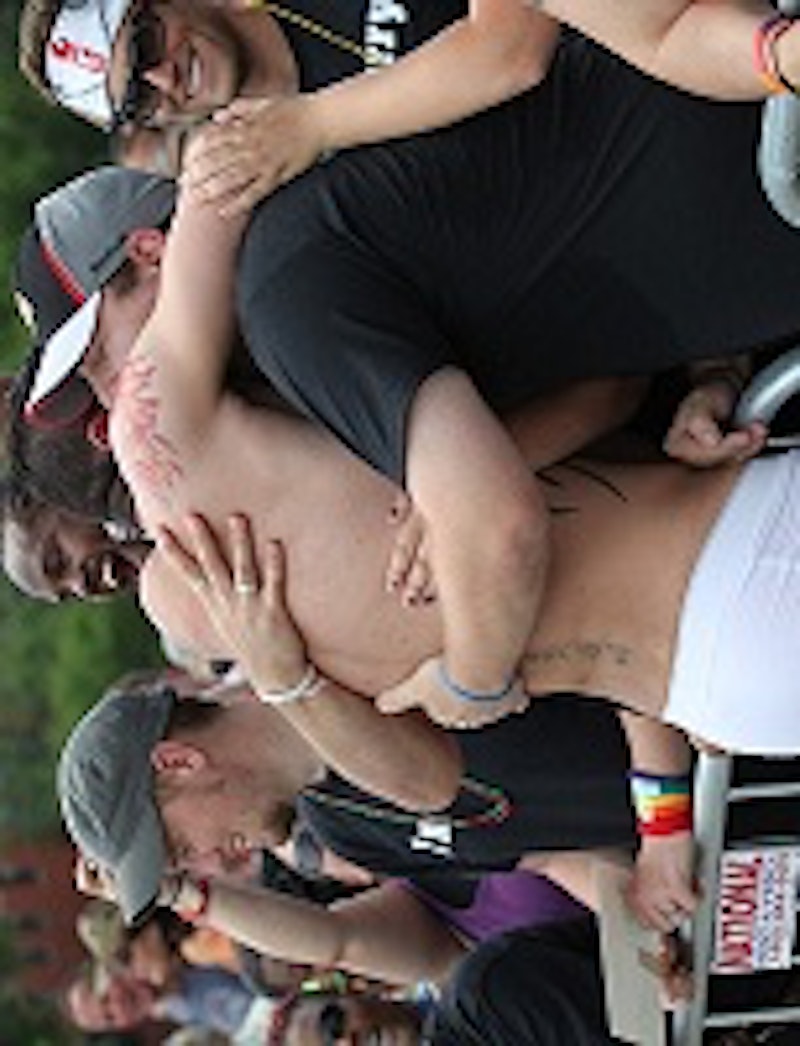 There is no doubt that there has been some movement towards reconciliation. I know of many LGBT individuals who are being welcomed into churches and whose faith is being restored. And there are Christians who seek forgiveness with the LGBT community and are mending past wrongs. But the road is long and the journey, in many cases, has just begun.

However, reconciliation is hindered when churches continue to fight over this topic and view homosexuality as some abstract issue rather than upholding the humanity of LGBT individuals. With the amount of division on this topic, Christians are giving LGBT individuals yet another reason not to be a part of the church. Why would anyone want to be a part of something that is full of division and heated tension over "issues?" I have heard many Christians say that the "issue" of homosexuality is overbearing, that the  "issue" of homosexuality is dividing churches or that the "issue" of homosexuality won't go away. Let me be clear, this is not an "issue" at all. This "issue" won't go away because this "issue" is about people. People who were created in God's image, people who have feelings, people who have been hurt and people whom Scripture calls Christians to love and even die for. More Christians need to be willing to lay down their lives for their LGBT sisters and brothers.

I have found that many of my LGBT friends haven't seen churches be a place where LGBT individuals are recognized as people. Most of the time, my LGBT friends are often quickly labeled and dismissed as sinners rather than children of God. This has got to change. For the sake of the Kingdom of God and the Good News of Christ, we must dignify all of humanity. We must move away from abstract issues that dehumanize people. We must let mercy triumph over judgment. We must love people more.

People are still angry with Christians and, consequently, angry with God.

Nathan Albert is the Collegelife Coordinator with University Ministries at North Park University and the Director of Pastoral Care at The Marin Foundation. A member of New Community Covenant Church, he blogs regularly at naytinalbert.blogspot.com and is an avid thumb wrestler. Follow him on Twitter @nathanalbert. / Illustration by Jerod Clark. Photo courtesy of Michelle Gantner - Maladjusted Media.

What Nicodemus teaches us about homosexuality

The cost of exclusion

What science cannot say about morality