When it comes to fear over Ebola, how do we balance a trust in reason with faith in a providential God?

I work in an office building 204 miles from the Dallas hospital where Thomas Eric Duncan died earlier this month, marking the first Ebola diagnosis and fatality in North America. The conversations among coworkers that day veered far from the normal topics to discussions of life and death ethics.

Last week, 43 people who had direct contact with Duncan were released from quarantine in good health. Two nurses who’d been infected with Ebola while caring for Duncan have both recovered. Yet this good news does not seem to be settling our national fear. A recent Pew Research poll comparing our level of concern from the beginning of October to last week found we are becoming more afraid that someone we love will be exposed to Ebola. Is it possible we are not trusting reason at all? What about a providential God?

Richard Sacra, a missionary doctor, was headed toward the Ebola outbreak in Liberia when his colleague, Kent Brantley, was infected with the disease. Sacra himself became infected and returned to the United States for treatment. He has recovered and told reporters, “I fully intend to be part of its reconstruction as I continue my work at ELWA Hospital, with a focus on training physicians and strengthening Liberia’s health system for the long run.” Is this reckless behavior? What sort of credo informs our response to epidemics? Do we even need one?

In 1527, the deadly Bubonic plague broke out in Wittenberg, Germany, the hometown of Martin Luther. Overwhelmed with the needs of the sick left behind while the fearful fled the city, Luther’s colleagues sought his counsel. What sort of action would please God? His letter in response, “Whether One May Flee From a Deadly Plague,” provides a humble treatise, balancing the tension between earthly vigilance and trust in God’s providence.

On the one hand, Luther recommended that those with a “strong faith” should stay: “It takes more than a milk faith to await a death before which most of the saints themselves have been and still are in dread. Who would not acclaim these earnest people to whom death is a little thing?” Luther especially admonished church and government leaders to stay at their posts unless there was enough help to meet the needs.

Is it possible we are not trusting reason at all? What about a providential God?

On the other hand, he made gracious provision for those who felt they should leave: “If someone is weak and fearful, let him flee in God’s name as long as he does not neglect his duty toward his neighbor but has made adequate provision for others to provide nursing care. To flee from death and to save one’s life is a natural tendency, implanted by God and not forbidden unless it be against God and neighbor…”

Maybe the first thing we could do to love our neighbors is to switch our news channels to global coverage (from this to something more like this). We need stories that remind us the hardest hit African nations, Sierra Leone and Liberia, are treating this unprecedented outbreak with infrastructure and public health resources devastated by civil war. We cannot have a Christian response if we do not understand that in the U.S. there are about 245 doctors for every 100,000 people, while in Liberia there is only one doctor per 100,000 people.

We can also learn from our African neighbors who are living and ministering in the heart of the Ebola crisis, Christians who are providing an example of both vigilance and providence. One of these faithful is the Very Reverend Herman Browne of Trinity Cathedral in Monrovia. When his wife Trokon was exposed to Ebola while ministering to a friend, they chose to walk carefully in the tension of caution and neighborly love. Herman and Trokon placed themselves in voluntary quarantine - for the protection of family and community, but also to model trust in the Liberian government’s instructions, something that is in short supply among the country’s citizens.

Browne is back serving the Eucharist to his congregation, using sterilized tweezers to place the bread of Christ into sanitized hands. He then sends the people out with the liturgical prayer, “Go in peace to love and serve the Lord.” May that benediction guide us all as we navigate the narrow path between caution and faith.

Tamara Hill Murphy writes at This Sacramental Life, where she encourages her readers to see God’s presence through daily practices of art, liturgy and relationships. Born and raised in the Northeast, she now lives in the bright city of Austin, Texas, with her audacious and often-homesick family: two daughters, two sons, one husband. / Sign image via Sergey Uryadnikov/Shutterstock. 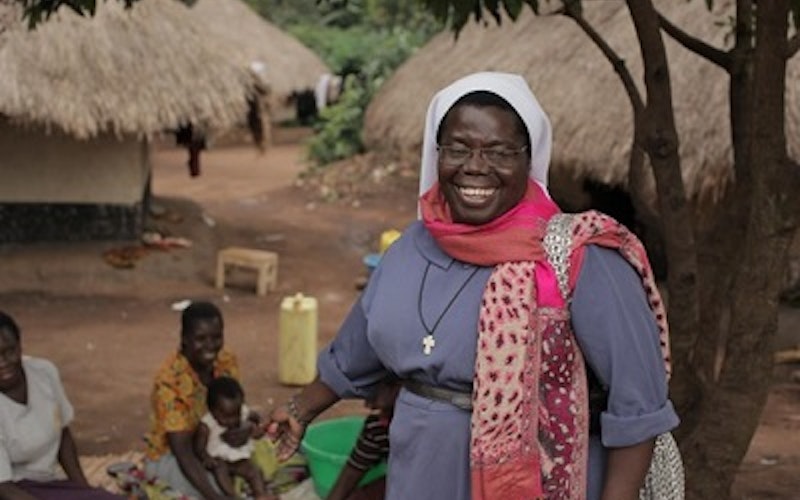