The cross did not go unnoticed. Several years ago, a group of parents and former students took the school district to court. They claimed that the presence of a cross during their ceremony violated their First Amendment rights. The courts agreed. Last month, the United States Supreme Court upheld the decision of the lower courts when it refused to hear the appeal of the Elmbrook School district. While the justices did not explain their decision, the Associated Press reports that in 2012, the federal appeals court in Chicago found that “religious symbols that were visible during graduation ceremonies conveyed a message that government was endorsing a particular religion.”

I will leave it to the legal experts to decide if the courts interpreted the Constitution correctly. What caught my attention, especially on the eve of the Fourth of July, was the message implicit in the courts’ decision. The courts could have shrugged their collective shoulders and declared that the cross was no big deal. They could have declared that the cross is “just a symbol.” They could have pointed out (as Elmbrook School District did) that there was no explicit endorsement of the Christian religion through sermons, prayers or Bible readings. But they did not. Instead, they insisted that the cross, as a symbol, is important. That the cross, as symbol, is powerful. And that the presence of the cross, as a symbol, means something.

What does the flag’s presence among us in worship mean?

As the Fourth of July approaches, many churches around the United States will add a splash of red, white and blue to their sanctuaries in a gesture of Christian patriotism. In some churches, like the one in which I worship, the change will be subtle. A single American flag will appear in a corner of the fellowship hall for one day and then will quietly be returned to the basement until Veteran’s Day. In other churches, the display will be a little harder to miss. In The Myth of a Christian Nation, Gregory Boyd recalls attending a worship service in which the enormous cross on the center of the stage was flanked by an equally large (Perkins size!) American flag. The service that day also included a set of patriotic hymns and a video that closed with a scene of three crosses on a hill in silhouette against an American flag.

The question is: what does the flag’s presence among us in worship mean? What message does it send? And is that message consistent with the Gospel of Jesus Christ?

Joel Schreurs lives in Denver, Colo., where he enjoys serving as co-pastor of First Christian Reformed Church and exploring the Rocky Mountains with his wife and two young sons. / Flag image courtesy of Shutterstock. 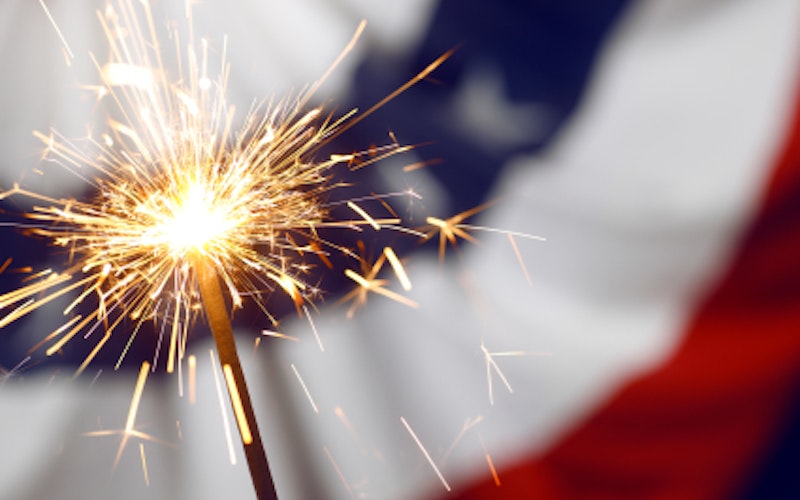 The Fourth of July and 'the soul of our nation'