Let it not be said that writing for ThinkChristian is all work and no play. I noticed this week that the Left Behind computer game--source of some controversy in recent months--has released a playable demo of the soon-to-be-released title.

It's been a while since I've found an excuse to fit my love of video games into a ThinkChristian post, so I knew just what I had to do. I installed the demo and fired it up, eager for some post-Rapture mayhem. It's Friday afternoon--a good time to talk about something fun, right? I won't attempt a full review (I'll leave that to the professionals once the game hits store shelves) but I'll offer a few comments on the game and the culture-war controversy into which it's fallen. 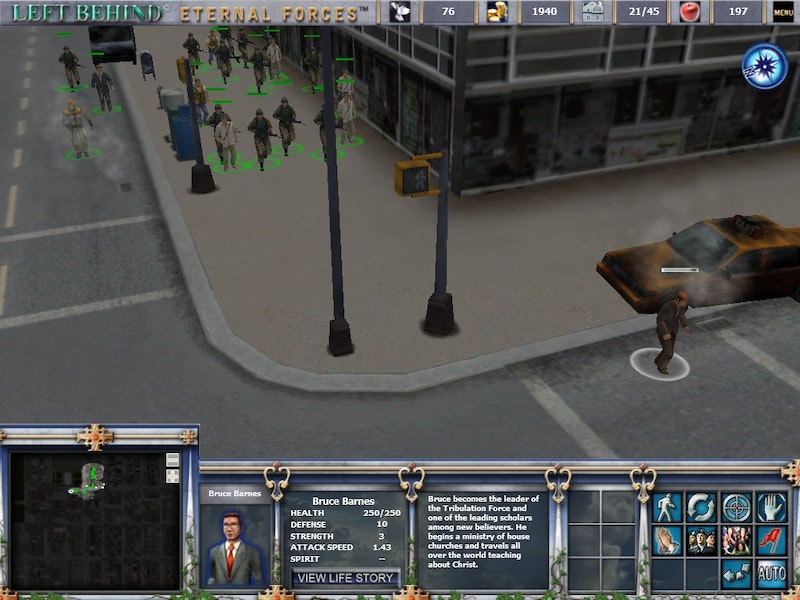 "Come back! God loves you and has a wonderful
plan for your life!" My heavily-armed, tract-
wielding tribulation force chases a passerby
through an intersection.

First, a quick overview of what the game's about: it's a real-time strategy game of the sort that will be instantly recognizable to anyone who's played Warcraft or Age of Empires. You control a "tribulation force" of Christians who are trying to survive in the post-Rapture world. From what I could tell, most missions consist of recruiting (think "converting") neutral passersby to your cause, then training them to fill roles in your force--medic, builder, soldier, etc. and then defending against enemy attacks. Except for the conversion thing, it works like most other real-time strategy games.

Second: the violence factor. This game attracted a lot of controversy from both Christians and non-Christians over the matter of how violent it would be. The violence I saw is bloodless and not gratuitous. You can kill innocent civilians (or so I've heard--I'd never try such a thing myself!), but doing so causes members of your force to abandon the cause, so it's really not encouraged. 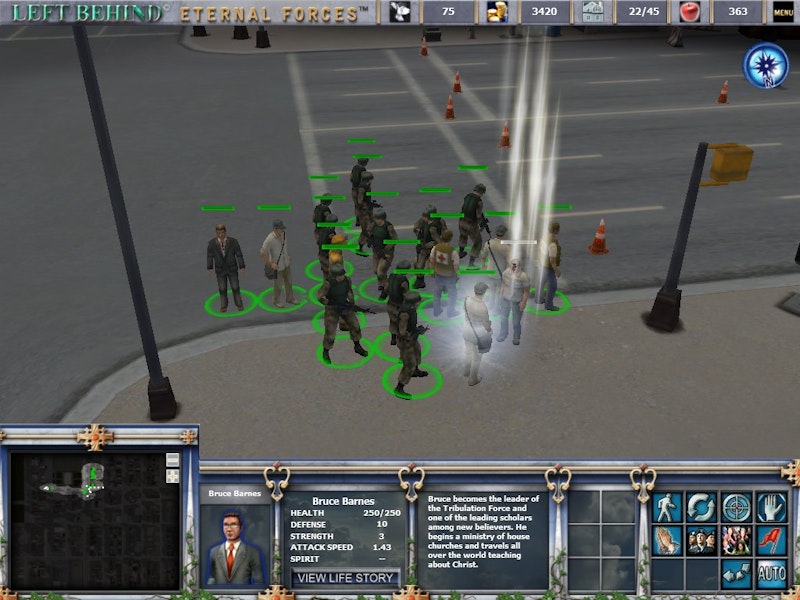 "Just read this tract and think it over--no pressure!"
A passerby is converted to the cause... while
my force of soldiers stands patiently nearby.

Third: is it a preachy guide to theocracy, the latest weapon in the evangelical right's fascist arsenal? Umm, not that I can see. More than anything, the game seems to follow along the general plotline of the novels upon which it's based; if the novels offended you, I suppose the game will too, but this isn't any sort of indoctrination tool. Due to the game's focus on a bunch of obviously Christian protagonists, I really can't see too many non-Christian gamers getting into it. But unless the full game is a lot different than the demo, I don't think Little Timmy is going to be brainwashed into becoming a crazed Christian zealot by playing it. The jury's still out on the extent to which the gaming medium can influence players' moral worldviews and behavior, anyway.

All that said, there's definitely something a bit goofy about converting people with the click of a mouse, and about recruiting followers while your Humvee and platoon of soldiers sit in the background--in the (not terribly remarkable) history of Christian-themed video games, I don't think anybody's found a way to touch on issues like prayer, faith, and conversion in games without coming across as overly mechanistic and silly. But chalk that up to the weirdness that's bound to result from trying to incorporate something like religion into an entertainment medium. If that creeps you out, you'll want to steer clear. 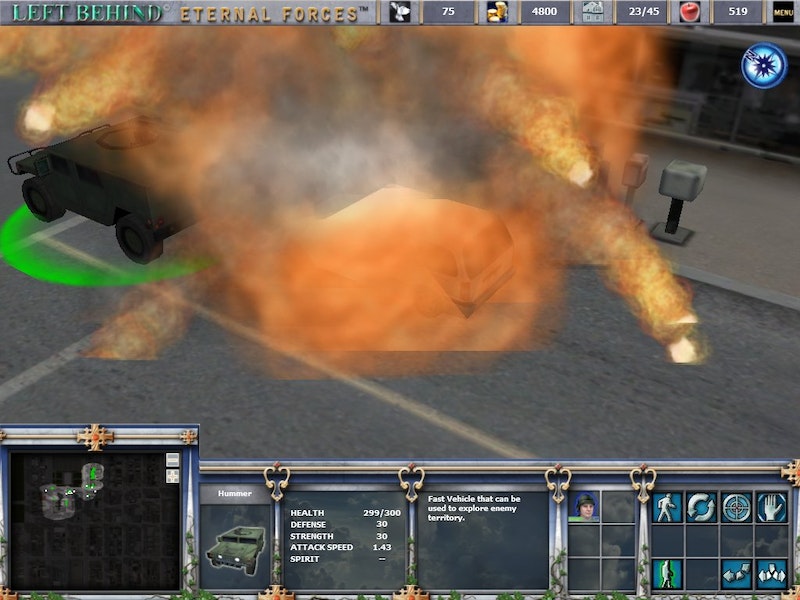 Ah, a loophole in the morality rules: killing
innocent civilians costs you support for your cause,
but there's no penalty for blowing up passing
vehicles with your Humvee.

Overall, it looks to me like the Left Behind is going to meet neither the overly pessimistic or overly optimistic predictions made for it. On the one hand, making it out to be an ultra-violent bundle of bigotry is way off the mark. On the other hand, it's not the Christian Game to End All Christian Games either. It might spark some interest in Christian video games, but it's not a revolutionary means of reaching people with the Gospel message. In the end, it looks like it's just a game based on a popular series of books. Perhaps it's best if, when it hits Best Buy shelves, we let it stand or fall on those merits and not try to read too much Culture War significance into it.