Should a 0.00003 percent chance of dying in a terrorist attack keep Christians from serving refugees?

A recurring theme I hear from Christians who support President Donald Trump’s executive orders on immigration—both his now-scrapped Jan. 27 attempt and this week’s revised one—is the firm belief that foreign-born travelers, especially refugees, pose a grave danger to the United States. At the same time, I hear other Christians arguing that Jesus’ call to care for the hungry, the thirsty, and those in need of clothing and shelter should take priority in this debate. It’s hard for a vigilant but compassionate Christian to know how to reconcile these positions.

Among the government’s most basic responsibilities is to ensure the security of its citizens. Security is important, and we should expect our elected officials to do what they can to provide it. But in order to decide what steps should be taken, we must first have a solid understanding of the threats that exist. Only then can we balance governance and compassion.

It turns out that under the pre-Trump immigration and refugee-vetting process, Americans were quite secure. A 2016 study by the libertarian Cato Institute, which examined all murders caused by terrorists on U.S. soil from 1975 through the end of 2015, revealed that:

CNN summarized the study this way: “You have a 0.00003 percent chance of dying in an attack by a foreign-born terrorist.”

After wading through this information, I can’t help but wonder: how secure do we need to feel before we’re willing to heed Christ’s call? I’m not sure we should use math to decide whether or not to obey God’s commands, but if we did, surely these figures would make the choice clear. Should a 0.00003 percent chance of dying keep us from meeting the needs of those who are suffering?

Should a 0.00003 percent chance of dying keep us from meeting the needs of those who are suffering?

And they are suffering. The majority of those seeking refuge in the United States are average people like Faez al Sharaa, who fled Syria with his wife Shaza after his small farming town had been decimated by fighting between government and rebel forces. (Syria is still one of the six Muslim-majority countries named in Trump’s latest executive order.) Now the father of two girls, al Sharaa works the graveyard shift at a Dallas-area Walmart. Trump’s travel ban makes it more difficult for our local churches and other Christian organizations to help people like Faez al Sharaa and his family. When we defend such policies or lobby for them, we are allowing an unfounded fear for our own security to prevent us from heeding God’s call to meet those in need.

A University of Chicago report revealed that a record 81 percent of white evangelicals voted for Donald Trump for two reasons: security and the economy. Yes, this is a dangerous world. There are those in other countries determined to do America harm. Yet we need not meet this reality with unfounded fearfulness and a desire to protect ourselves at all costs.

The Bible calls us to do many things that go against our self-interest. That’s Christianity. Today, we are called to meet the worst migrant and refugee crisis since World War II. As Matthew Soerens has written previously at TC, Romans 13’s encouragement to honor our governing authorities—when taken alongside Jesus’ call to make room for those on the margins—compels us to advocate for public policies that would both provide reasonable security and extend compassion to vulnerable immigrants and refugees. We’re acting cowardly if a 0.00003 percent chance of being the victim of a terrorist attack prevents us from doing that—and we’re being dishonest if we claim the danger is any greater. 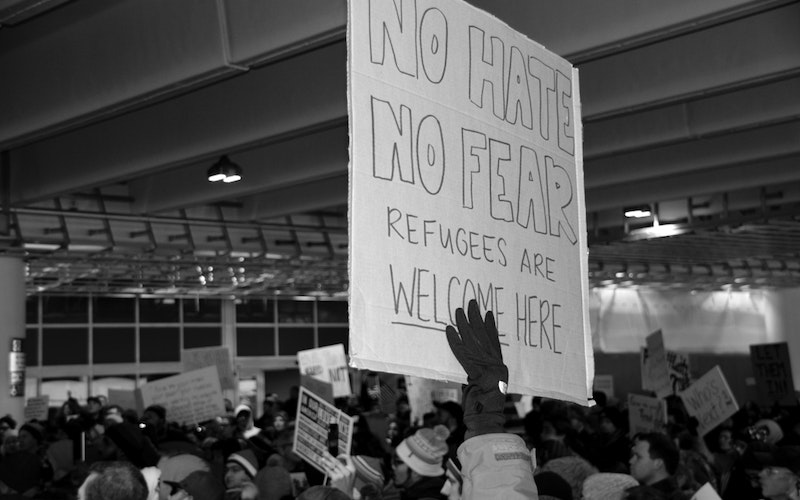 What if Christians Were the Ones Being Banned?