So what exactly did happen a billionth of a second after the Big Bang?

That's the question particle physicists from around the world are trying to answer via a little science experiment using the Large Hadron Collider (LHC).

This week, researchers reported that they are one step closer to verifying the existence of the elusive Higgs Boson (a.k.a. the "God particle"). If they find it, it will be one of the biggest scientific discoveries in 50 years. "Our whole picture of how matter exists within the universe depends on the existence of the Higgs Boson," said project physicist Dr. Robert Orr.

And it seems we'll spare no expense or effort to prove it's there. Budget? $10 billion. The plan? Fly protons around a 17-mile-long ring at 11,000-revolutions-per-second (99.99991% of the speed of light) and then smash them together. The purpose behind it all? To try to understand how matter and mass came to be!

To try to understand how we came to be.

It's a worthy question.

Nobel prize-winning physicist Steven Weinberg said, “The urge to trace the history of the universe back to its beginnings is irresistible.”

"Humans long for coherence and completeness,” wrote University of British Columbia professor Dr. Dennis Danielson in "The Book of the Cosmos."

We are meant to know where we came from and how we got here. This is what's driving us to invest so much energy and attention into this project. We're searching for the big story,  a "grand theory," something that makes sense of all of this.

We are meant to know where we came from and how we got here.

And our need to know is pushing us to the very edge of our potential.

The fact that we can conceive of and implement an experiment like this is quite remarkable. God really did make us "a little lower than the heavenly beings and crowned [us] with glory and honor." Richard Dawkins even agrees: "Our ability to understand the universe and our position in it is one of the glories of the human species.”

We are made in the image of a God who made the universe. So, when we bring the brightest and best minds in the world together to try and recreate a moment that is similar to that which occurred just after the Big Bang, we are imaging the God who was there when it happened the first time.

In a way, it makes perfect sense that humanity would come to a point where it would reflect God's "particle physicist" mind through a scientific experiment like this. And what's really exciting is the possibility that the LHC's findings will reveal something new about the mind of God.

The more those scientists uncover, the more we'll have to know, love and worship God with ... to worship Jesus Christ with, the one through whom all things were made.

Imagine, the Large Hadron Collider revealing the mind of Christ.

They say that one reason scientists can do this experiment today is the fact that we now have the technology to focus enough energy into very small spaces. “It takes a huge amount of energy to create mass/matter," said one expert.

When I read that quote, I thought about the energetic power of God and how much he must have exerted when his Spirit first "hover[ed] over the waters…”

What power. What a mind. And to do it all out of nothing.

We should be thankful for experiments like the LHC. They pull back the veil and allow us, in a sense, to look back in time to the beginning of all things. By recreating a 13.7 billion-year-old moment, the world's scientists are giving us a better understanding of the Alpha nature of our Maker.

And God is glorified.

John Van Sloten is the preaching pastor of New Hope Church in Calgary and author of “The Day Metallica Came to Church.” /Image depicting an experiment conducted by the Large Hadron Collider courtesy of CERN. 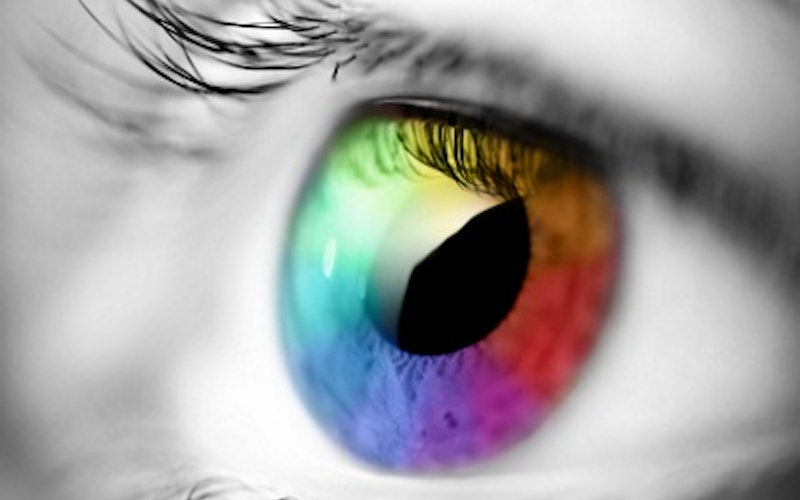 Spiritual perception and the science of color