Churches who embrace the Johnson Amendment's repeal will sacrifice gospel unity on the altar of political power.

You are correct that it would not be wise for a pastor to endorse a political candidate. The local congregation council or governing body should be supervising the pastor. You cite sphere sovereignty which also applies to the government's authority. They should not be dictating to the church and therefore the Johnson amendment should go, don't you think?

When politics and culture impinges on very fundamental issues of life and conduct, I think churches ought to be able to respond, or at least remark trenchantly, without fear of reprisal by the IRS. The Johnson Amendment should go because it is really an unwarranted bridle on free speech.

In my view, the "Johnson Amendment" is unconstitutional. I could be wrong but I don't think the IRS has ever seriously enforced it.

Of course, the invisible (aka, catholic, universal or organic) church should, as Abraham Kuyper boldly suggested, engage all areas of life, the political included. But that is distinctly different than the institutional church doing so. I've practiced law for 37 years, which rubs shoulders with the political pretty much all the time. I've been part of political advocacy organizations (e.g. Right to Life, public interest law firms), and I've testified before state and federal legislative and agency committees. But in all those instances, I never purported to act in behalf of my local church or the CRCNA, and should not have.

I wish the CRCNA could consistently be of this view (to not be a political lobbyist). While its own church order rules (Article 28) restrict the denomination from matters not "ecclesiastical," its Office of Social Justice activities regularly engages in political lobbying (even if not endorsing candidates). I'll defend the CRCNA's (OSJ's) legal right to do political lobbying (despite the Johnson Amendment) but at the same time suggest it is unwise in the extreme to do so.

I think it is wrong to view the Johnson Amendment as a curb on free speech, or the government "dictating" to churches. The amendment is a TAX rule, and does not purport to dictate what churches or their leaders can or cannot say. It simply states that if religious institutions wish to enjoy a special exemption from the tax laws, they cannot become political organizations or engage in lobbying -- in the same way that they cannot engage in commercial activities. It is exactly the same rule as is applied to EVERY other sort of non-profit -- they must confine themselves to the particular categories of activities that the government declines to tax. I chair a non-profit that works with issues of drug addiction. If we engage in certain sorts of political (or commercial) activities, we lose our tax exempt status. Why should churches be treated differently? To do so simply increases resentment on the part of many who don't think churches should get any sort of special treatment.

In Reply to Mark Atwood (comment #29922)
The "TAX Rule" should only apply to being a "not for profit" and nothing else. The IRS is just another example of an agency making a rule that the Constitution does not address.

Not sure if removing the Johnson Amendment will benefit the church, but some Pastors use it as an excuse not to discuss anything political - which is a dereliction of duty. I don't encourage endorsing individual candidates, but God gave us a very clear example of the kind of people that should be selected to office - we see this in Exodus 18:20-21. Pretty simple - teach "them the statutes and the laws" and select able men who fear God, men of truth, who hate dishonest gain, and are just (implied). If a Pastor fails in expressing these truths they have failed. From here one can support or denounce a candidate, a policy, or even a party based on God's Word opposed to a Pastor's choice.

Pastors who fail to expand on these verses and how it applies to voting will most likely not be affected by the removal of the Johnson Amendment - but it might free up some new, immature, or mis-informed pastors to dialog with their members on the responsibilities of Christians to incorporate all of God's Word in their lives, action, speech, and even voting.

The Johnson Amendment is meant to curtail any endorsement of a politician by a 501c3 that is faith based, not overextending it to include being a lobbyist for, just merely endorsing or not. That is a violation of free speech and therefore repealing the Johnson Amendment will benefit churches because although the church is an institution according to the IRS, it is not according to God, it is the people, the body comprising the church.

I personally think that evangelical Christianity has taken a body blow resulting form their obvious participation in the political sphere, and abandonment of unity in love. Christians, of otherwise good will toward each other, have been increasingly asked to take sides on any number of issues -- hot button issues, or otherwise. And many seekers, needing to find compassionate love, are finding instead an agenda of political opinions that they are expected -- subtly of course -- to hold.

Politics is about swaying opinion toward a preferred policy or candidate. The church's "job" is not to sway opinion at all! But to love God and love neighbor, introducing people to Jesus Christ as the Holy Spirit leads. Politics divides people into groups -- "us" or "them". The church *ought* to unite people under the banner of Christ.

So why do we need to pave the way for churches to abandon their mission, and become MORE political than they already are??

I wouldn't suggest that I know our new President's motivations, but I do wonder if removing the Johnson Amendment would just be a step toward taxing churches like they're businesses. Personally, I don't see a problem with the system as it stands so, "if it ain't broke don't fix it."

Churches are just like other tax-exempt Not-For-Profits. Just like the Sierra Club, the Boy Scouts, Planned Parenthood, your local swim club. They can organize for particular legislation, their leaders can promote letter writing campaigns, in that sense, they can be political. Just like those other organizations.

If the law changes, so should our tax-exemption, and I'll be first in line to say so. It means churches could collect campaign money and fund particular politician's campaigns, while remaining tax-exempt. (Which is why Trump favors this, I think.) No. No. No. A thousand times No.

Please, Think Christian, educate us on what this law would do and doesn't do, and how things are now. Too many people are confused.

If you follow the link in Branson's first paragraph, via "current system," the ensuing article breaks down the details. 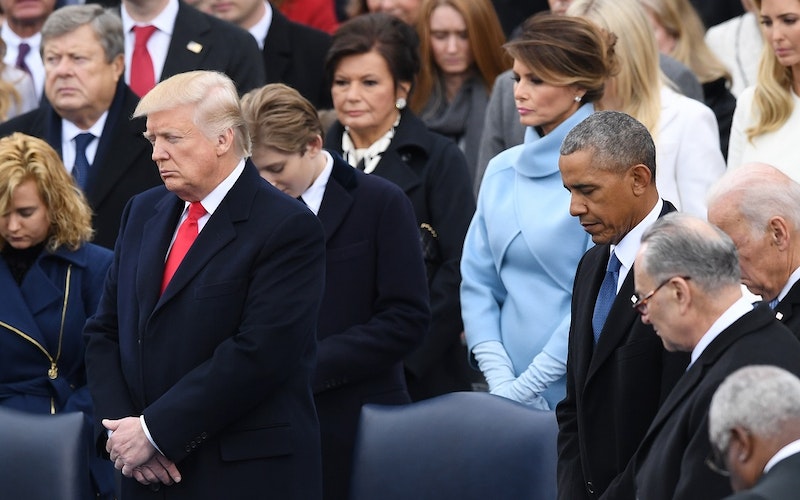