One of the more challenging presentations at Calvin College's recent January Series came from Mark Charles, who opened his talk by warning the audience that they may want to throw something at him before he was done.

Charles revisited the Doctrine of Discovery—a 15th-century papal edict that declared any land not inhabited by Christians could be claimed by European explorers—and traced the traumatic effects of such Western expansion. This includes, he argued, effects still felt today both by Native Americans and the descendents of white Europeans. (Charles himself is the son of a Dutch American woman and a Navajo man).

We've previously written here at TC about biblical justice as it pertains to indigenous people, so we're pleased to share video of Charles' talk below. Charles spends a good deal of time highlighting “what we don’t talk about” in American history, from the massacres of Native Americans (for which United States soldiers who were given medals) to current entanglements, including the negotations between the federal government and the Standing Rock Sioux.

Too often, Charles said, Christians have been on the wrong side of this history. "The church has been in bed with the empire since Constantine,” he told the audience. Rather than racial reconcilation, Charles called for racial conciliation. “This thing started out bad," he expalined. "We’re not trying to get back to a pervious harmony. We’re trying to get to a place that's better than where things are at today.”

Particularly compelling was Charles' argument that the enduring trauma of the Doctrine of Discovery damages both the oppressed and the oppressor, even down through the generations. According to Charles, this explains why denial and obfuscation tend to be the knee-jerk response of many white Christians during discussions of our shared history with indigenous Americans. Keep that in mind as you watch.

If you're in the Chicago area and would like to hear Charles in person, he'll be speaking twice on Monday, Jan. 30, in cooperation with Trinity Christian College. At 10 a.m. he'll be discussing the Doctrine of Discovery at Ozinga Auditorium on Trinity’s campus, 6601 W. College Dr., Palos Heights. At 6 p.m., Charles will address Standing Rock in particular at the Chicago Semester office, 11 E. Adams, Suite 1200, Chicago. 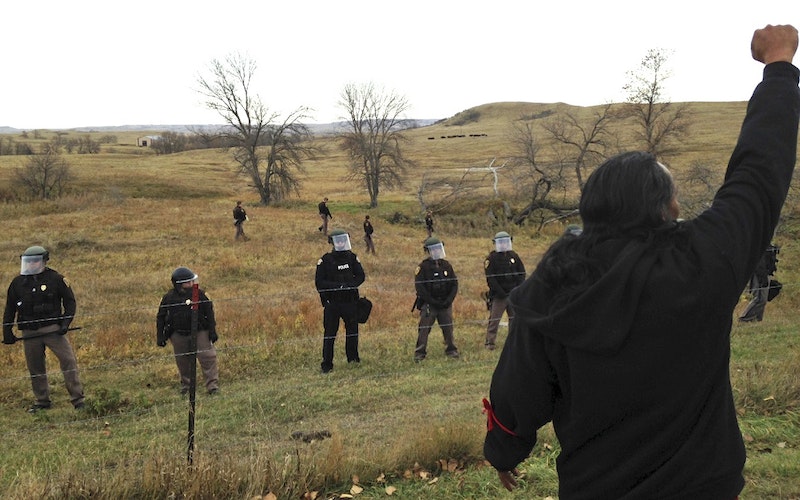 Why Christians Should Stand with the Standing Rock Sioux