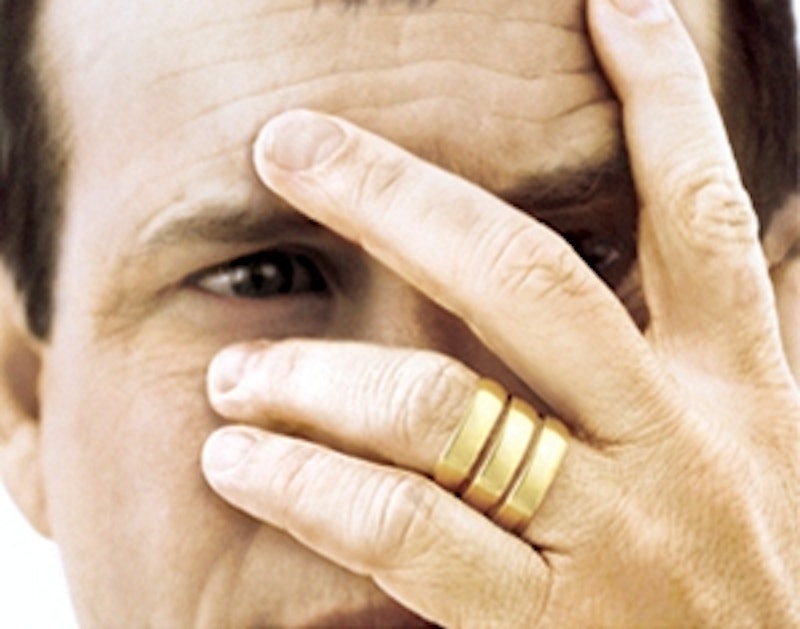 I'd like to take an indirect approach to talking about the sanctity of marriage. Instead of looking at Bible verses that address this hot-button topic, I want to discuss Bible verses that don't talk about it. Because frankly, they get me a little confused.

For whoever cares, my own view is that God originally created marriage and sex to be between one man and one woman. But recently I was thinking about the Old Testament, especially some of our loftiest Old Testament heroes, and wondering why they weren't a little more committed to this view — particularly the one woman part. Because many of them had multiple wives. Polygamy was more or less taken for granted from Genesis to Malachi.

Sure, cultures in different times and places differ in practices, and you shouldn't always read too much into them or apply your own cultural standards across the board. But if, as I believe, God's intent was for marriage to be shared with a single partner, and if adultery in the Ten Commandments was a forbidden deviation from that intent, then how did all those polygamists get off the hook so easily?

Look at Jacob. Not an upstanding citizen to begin with, but hardly unusual in his marital adventures. He asked Laban for his daughter, lifted her veil and declared that she was too ugly for him and wanted another daughter. (How shallow is this guy? Ever heard of inner beauty?) Laban shuffles his daughters in and out of Jacob's honeymoon suite like they were playing cards. Jacob keeps them and collects them like coats in a closet.

But polygamy wasn't just not frowned upon, sometimes it was commanded: if your brother died, you had to marry his wife, in addition to your own, and try to get her pregnant. Onan refused and suffered divine wrath. ("Onanism" is often used as a word for solo sexual activity, but I prefer the biblical definition of the term: "failing to impregnate your dead brother's wife.") Granted, this was a compassionate concession to the culture — since a widow in that culture was powerless and socially useless without a husband, it was good to make sure she had one. But the fuzzy ethics of the whole arrangement still bother me.

David had multiple wives. He got in trouble when he tried to add Bathsheba to the collection, in part, it seems, because he already had multiple wives and Uriah only had one. There's at least one Old Testament monogamist for you: Uriah. He became a martyr for monogamy. There's also the prophet Hosea, who stayed resolutely faithful to the prostitute he married. For some reason, few pastors today choose to follow his exact example.

Solomon had so many wives and concubines he could go for years without a repeat sexual partner. (He eventually got in trouble for his taste in foreign women, but only because they worshiped idols. The problem was other gods, not other girlfriends.)

Esther's big break was joining the king's harem. Ruth's big break was seducing a probably married man. Had I been around I would have tried to stop them both from such immoral acts. But I wasn't, and God's redemptive plan proceeded without objection.

The reigning explanation for all this jarring behavior is that God didn't require human society to remove all unjust social structures before intervening in a broken world: he could come in the midst of those unjust structures and work within them for the redemption from the curse of sin. Thank goodness for that! And again, who are we to judge another culture?

But that's still a lot of tolerance for polygamy — tolerance that I myself can't summon.

The New Testament also sends mixed messages about marriage. There's no more polygamy, thank goodness. But Jesus says that if you ever have to choose between discipleship and family, it's a no brainer: leave your family behind without saying goodbye. He also says that at the coming of the kingdom there will be no more marriage or giving in marriage. Paul says that his marital status — single — is spiritually the best, and wishes that every Christian could be single, but regrets that not all are strong enough. Other than Priscilla and Aquilla, I can't name any married couple from the New Testament after the time of Christ.

I'm not saying that the Bible is soft on sin. I'm not saying that the Bible is too contradictory to be authoritative. It's not. What I'm saying is that sometimes the Bible sends as mixed signals — or more likely, signals that seem mixed to us, in our limited understanding — more often than we'd probably care to admit. The Bible is a beautiful but bizarre book, and we do no one any favors when we try to pretend it isn't. We have to let the Bible be a little strange and perplexing to us — and if we don't, we're being too presumptuous about the adequacy and completeness of our own interpretations.

Nathan Bierma is an educational technologist at Calvin Theological Seminary and author of “Bringing Heaven Down To Earth: Connecting This Life to the Next.” His website is www.nbierma.com.