As we remember the attacks of 9/11, we should also remember that Psalm 34 calls us to fear God, and God alone.

These remarks were given at a recent chapel for employees of the Christian Reformed Church, TC’s parent denomination.

Where were you on Sept. 11, 2001? I suspect each of us remembers the moment that we heard about what had happened. I remember where I was. I was a young mother at the time, fumbling my way through life as a stay-at-home mom. I had driven to my parents’ house that morning, eager for adult companionship while my husband was at work. My 1-year-old daughter had woken up around 5 a.m. that morning, and by 9 a.m., was ready for a nap. I had just put her down, and joined my mother in her living room when she told me to look at the television. We both stared at the screen in shock as we watched the first of the Twin Towers burn, and then watched in horror as another plane crashed into the second tower. I was six months pregnant with my second child that day, and I had no idea how that day’s events would change the world my children would grow up in forever.

Watching the events of the morning unfold, I was brought back to where I was six years earlier, sitting on the floor of my dorm room at Michigan State University. I was trying to do homework but was distracted by the images on the television screen coming from Oklahoma City, images of bloodied children being pulled from the daycare of the Murrah Federal Building. At that time I volunteered at the YWCA in downtown Lansing, across the street from Michigan’s state capitol, working in an after-school program with children who didn’t look all that different from those I saw on the television screen. I watched and I listened, in despair, as an American senator asserted that this bombing was the obvious work of Arab Muslims. Because that brought me back to another day: Oct. 30, 1993.

That fall, I was in my senior year at my Christian high school. For months my siblings and I had endured name-calling, intimidation and threats, because we were Arabs and our father was a Muslim. We were told by our high-school administrators that “boys will be boys.” But the tension came to a boiling point when, on that date, one of our classmates brought a gun to our high school football game to kill my brother. My brother escaped, but I could still remember the feeling of sitting at my dining room table that night, talking with a police officer as we waited for my classmates to show up with a cross to burn in our yard. I remembered the fear vividly because it had never fully gone away. If you’ve ever been the victim of a crime or harassment, you know that fear has a powerful grip.

We remember these moments. And we often carry them with us. These moments, and the fear that they produce, can affect us in ways we don’t realize. Shaping our decision-making, determining where we place our trust, who and what we hold dear, and how tightly we hold on to them.

Psalm 34 describes what it means to surrender one’s fears and place one’s trust in God. This is easier said than done. For those of us who rely on a job for regular pay checks, cars to get us to and from work, homes to provide us shelter, cell phones to keep us connected, family and friends to bring us comfort and a whole host of other things to bring order to our lives, relying on God alone to meet our needs can be a challenge. Until those things are not there.

When order is gone, I show my true colors before God. I am all too frequently a rainy-weather friend to God, happily going about life until I really need him. When I do, I immediately ask God where He is. I scream and cry and I lament the problem of evil. Maybe I’m not alone.

The fear of God is a fear that frees us.

But we can find comfort because this Psalm tells us that God hates evil. Not only that, God actively seeks to destroy the forces of evil at work in the world. Whether that evil comes in the form of terrorists who hijack planes and blow up buildings or people who are supposed to protect you and choose to look the other way. God has no tolerance for evil.

In this Psalm we read that fear is part of life, and that what matters is not that we fear but who we fear. Because the fear of God is not a fear that terrorizes or cripples us. The fear of God is a fear that frees us. It frees us to live not in fear of the chaos of the world, but in courage, relying not on our own strength to face our fears, but God’s. It is the fear of God that throughout history has compelled people to act not out of selfish ambition or vain conceit, but out of love for God and for others.

While it was fear of the power wielded by the United States that led Mohamed Atta and his co-conspirators to hijack planes and fly them into buildings, taking thousands of innocent lives, it was the fear of God that convicted Father Daniel Murphy, whose brother was killed in the World Trade Center that day, to say from the pulpit, “My brother’s life is too precious for me to be ruled by anger, hatred and feelings of revenge.”

While it was fear that led men to torture and murder 14-year-old Emmett Till in the summer of 1955, it was the fear of God that brought Martin Luther King Jr. to the steps of our national capitol, calling for equality, in 1963.

While it was fear that fed Hitler’s campaign of genocide against the Jews, the disabled and anyone whose lives the Third Reich did not deem worthy, it was the fear of God that convicted Dietrich Bonhoeffer to vocally oppose the Holocaust, even when it meant losing his life.

Forgiveness, standing up for others, giving one’s life: these are but a few of the acts of courage made by Christians who chose to surrender their fears and place their trust in God. How about us? Will our decision making be dictated by fear or by trust? When God looks at the injustice and pain in the world and asks us, “Where were you?” how will we respond?

There’s a memorable point in the Bible where God asks “Where were you?” In Job 38, following Job’s lengthy lament and his friends theologizing, God responds to Job and his friends out of a storm.

I wish I could say that all of my decision making was rooted in trust of God and not fear. I wish I could tell you that God has delivered me from all of my fears. But I trust God to one day blot all evil out from the earth. And I trust God to use me in that process. And I know that trusting God and surrendering my fears to Him is not a one-time decision, but a long obedience in the same direction.

Father Murphy, the priest who had the courage to forgive those who murdered his brother and so many others, also made this challenge to Christians after Sept. 11. He said, “We can be a people who respond with love, compassion and healing to end the evil, not only in the terrorists, but the evil and darkness that exists in every one of us.” Amen.

Shannon Jammal-Hollemans is the project developer and team leader for the Office of Social Justice, a Think Christian sister ministry with the Christian Reformed Church. / Image of the September 11 Memorial & Museum via Shutterstock. 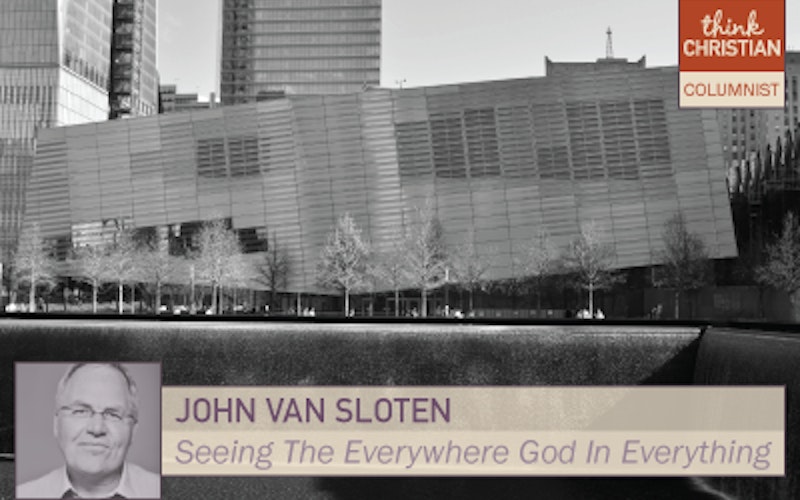 The 9/11 Museum and viewing tragedy from above