U.K. poet Hollie McNish composed a spoken word piece that recently went viral. The topic? Breastfeeding in public. McNish describes her own experience in vivid ways that serve as a powerful defense of the practice (you can watch her performance, which includes explicit language, below). It’s clear that her goal is not to flaunt her body or abandon discretion but simply to feed her child when necessary.

When Christians engage this issue, they often hold debates about modesty. That’s certainly a worthwhile angle to pursue. But McNish points out that this issue isn’t merely about sex, but about the underlying economics of the issue.

Our culture is saturated with sex. But why? McNish makes it clear: sex sells. As she puts it, “Female breasts, banned / unless they’re for show.” In our consumerist, capitalistic culture, the commodification of our bodies and body parts is common. We’re used to seeing sexualized bodies all the time - in commercials, movies and on the covers of magazines in the checkout line at the store. Christians need to remember that these are not just bodies; these are bodies in service of consumerism. So should we be critical of our sex-saturated culture? Certainly. But we’re naive if we ignore the root cause, which is a consumerist worldview that does to human bodies what it does to everything else: packages them for sale.

So why is breastfeeding still an issue? Perhaps breastfeeding is shocking (even disgusting) to a consumerist culture because of the scandalous fact of the free, functional, life-giving power of breast milk. It’s free, it’s not sexual and it can’t be packaged and sold.

Breastfeeding stands as a powerful sign that God is the ultimate source of all that is good and that everything that exists is a gift.

There’s a deeper theological interpretation of breastfeeding as well, one that sees it as a sign and symbol for all the good gifts of creation. In his Confessions, St. Augustine writes, “The comforts of human milk were waiting for me, but my mother and my nurses did not fill their own breasts; rather you [God] gave me an infant’s nourishment through them in accordance with your plan, from the riches deeply hidden in creation. You … inspired in those who nurtured me the will to give me what you were giving them, for their love was patterned on your law, and so they wanted to pass on to me the overflowing gift they received from you. It was a bounty for them, and a bounty for me from them; or rather, not from them but through them, for in truth all good things are from you, O God. Everything I need for health and for salvation flows from my God.”

Through this lens, breastfeeding stands as a powerful sign that God is the ultimate source of all that is good and that everything that exists is a gift. As a result, the natural fecundity and fruitfulness of God’s creation is something that should be seen as a gift, not a commodity. Breastfeeding thus stands as a perpetual theological questioning of a culture that treats the good gifts of creation as nothing more than commodities or “natural resources” to be packaged, bought and sold. Understood in this light, McNish’s willingness to breastfeed in public is a powerful economic and theological statement.

Rather than seeing the world as raw “resources” for our consumption, Christians need to re-train ourselves to see all creation as gifts and signs that point to the God of abundance. Rather than seeing bodies sexualized by consumerism, we need to re-train ourselves to see bodies that inherently bear the marks of a God who gives in superabundance. So next time you notice someone breastfeeding in public, don’t stare. Just say a prayer of thanksgiving to the Giver of all good gifts. 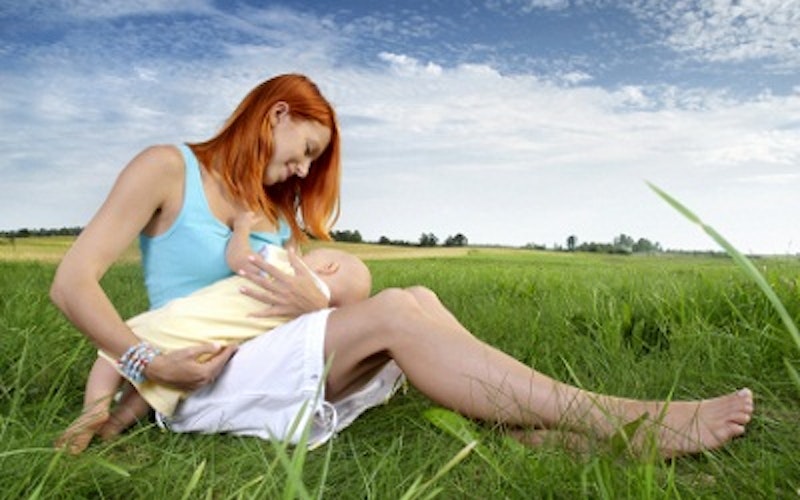 What would Jesus do (with nursing mothers)?