Editor's note: Agendas Aside, a Think Christian series on homosexuality and the church, also includes pieces by Neil de Koning, Joshua Walters, Glenn Goodfellow, Jason E. Summers and Nathan Albert. TC is a ministry of the Christian Reformed Church in North America. The denomination's position statement on homosexuality can be found here.

People aren’t quite sure what to do with The Wise Kids.

An independent coming-of-age drama about members of a church youth group who learn that one of their members is gay, the movie has respect for its characters’ faith and sexuality, as well as the way these teens try to reconcile the two. In other words, The Wise Kids resists being used as weapon in the current culture wars.

With positive reviews in places like The New York Times and appearances at both gay and mainstream film festivals, the picture has nonetheless become an important part of the conversation for those trying to process such issues. Stephen Cone, the film’s writer, director and co-star, recently sat down with Think Christian to discuss the movie and its journey.

Has it been difficult to find an audience for The Wise Kids?

If you premiere at a gay (film) festival, which we did - not because I was targeting it but because it was the first big festival to take us - then you suddenly get branded a gay film even if you’re not. Half the audience I made it for wouldn’t be caught dead at gay festivals. What I’ve tried to do is sort of, in a parallel way, target non-gay festivals along (with) the gay festivals. To try to play both. But it’s been a really interesting lesson in what it means to premiere at a gay festival. As soon as you do, then you’re the new big gay film. Then people see (it) and they’re like, “Why is this playing at gay festivals?”

Why did you choose to make this an ensemble piece about a number of the kids in the youth group, rather than the story of Tim (Tyler Ross), who reveals he’s gay?

I guess I just became increasingly interested in making a portrait of a community. One thing about growing up in the Southern Baptist church is you realize it’s as diverse a community as any other… For me it’s just about the individual human experience and wanting to talk about Christians as people as opposed to Christians. One semi-recurring theme amongst several of my films over the years has been the fact that the one thing that believers and nonbelievers share is the human body. That interests me, that Christians can’t help but be human, as much as they may want to focus on the transcendental otherness of themselves, at the end of the day they really are just walking around in human bodies like the rest of us. 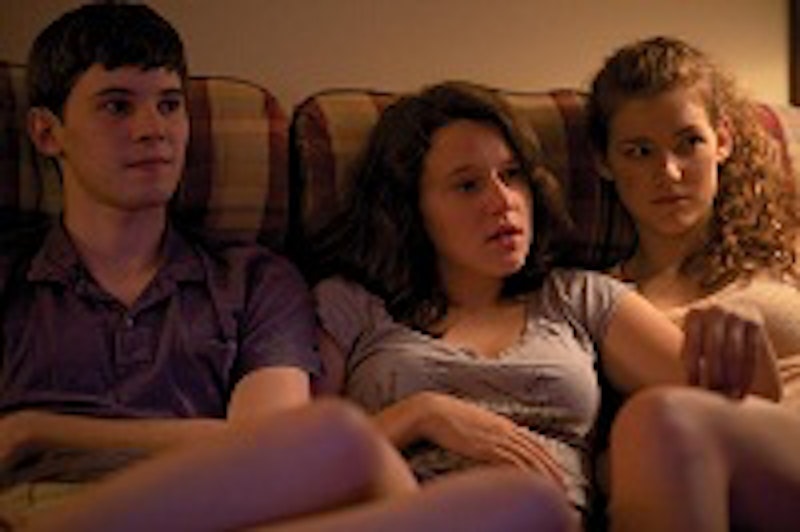 Was this a personal story for you?

I grew up in a youth group, so so much of it comes from my own youth group and how much I value that final year of high school. That final year of high school and first year of college is really when the plant comes out from underneath the soil into the world. I just think teenagers - a lot of teenagers are underrated and undervalued as thinkers and seekers. There’s obviously lots of slackers and people who are shutting down in high school but what we never hear about are the kids who are actually engaging with each other and engaging with their existence. I guess I felt those tensions a little bit in my youth group in a positive way, of people being honest about what they may be doubting or not doubting.

How have people reacted to the film?

I’ve spoken to people of every type who have responded positively and engaged with the film. Sometimes it’s inadvertently and in small ways. I may have a very conservative Christian friend who may not have said something to me after the movie but will all the sudden start liking everything about The Wise Kids on Facebook and in that way they’re hinting to me that they understand the film. What they’re responding to is the open engagement of ideas and values, of people unironically and uncynically engaging with each other about their lives… There is someone I have in mind who I grew up knowing, her husband is a charismatic preacher and they’re very devout… the entire family came to the Charleston screening and loved it for their own specific reasons. Then there’s the other end. There’s the 65-year-old gay man in Los Angeles who responds in equally positive ways for very different reasons.

What role can the church play in helping people wrestle with the issue of homosexuality?

I suppose my first thought is that even if there’s not an answer, society is going to end up doing a lot of the work for these people and for churches. The issue of women’s rights and slavery and interracial relationships – those things didn’t necessarily reign supreme because churches had a powwow and engaged with each other. They didn’t wait for the churches. So whether churches decide to chat about it or not I just think the train is moving and 50 years from now we’ll be talking about it like we do any other issue that we’ve moved past. There will be 80-year-old people talking about this 50 years from now, maybe, but no one else. I really don’t think it will be an issue.

Where can people find The Wise Kids?

All the screenings are at thewisekids.com and the Wise KidsFacebook page. And that’s where, when we do have a distributor, we’ll announce it.

Josh Larsen is editor of Think Christian. He also writes about movies at LarsenOnFilm.com and is the co-host of Filmspotting. Connect with him on Facebook and Twitter. / Illustration by Jerod Clark. Photo courtesy of Cone Arts.

What Nicodemus teaches us about homosexuality

Why Christians should support the Day of Silence

The cost of exclusion