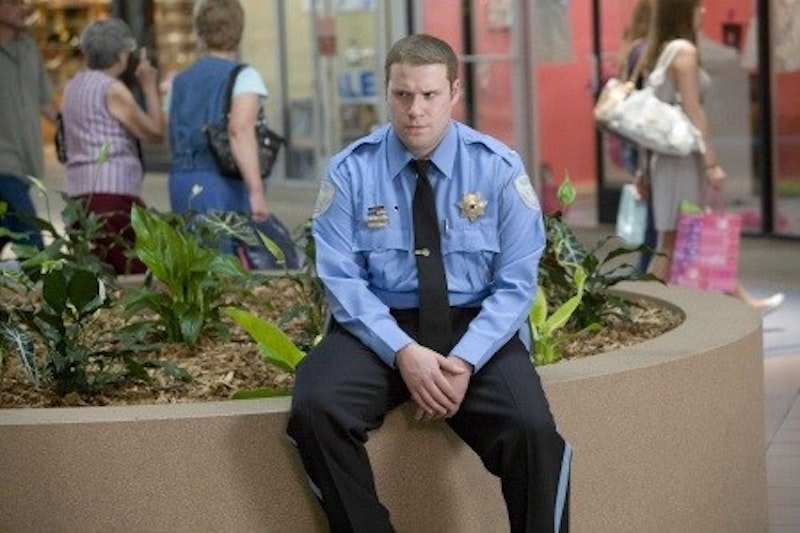 I’ve found myself in the uncomfortable position of defending a movie littered with F-grade vulgarity, brutal “comic” violence and a climactic chase scene built around full frontal male nudity.

Many of you probably already know I’m referring to “Observe and Report,” a crass comedy about a deluded shopping mall security guard (Seth Rogen) on a deranged power trip. The picture is intended for giggling 14-year-olds, yet it has sparked the sort of spirited debate normally reserved for political pundits on cable news shows.

Many people have decried the film as yet another example of Hollywood using shock comedy to sell tickets. Others, myself included, have defended it as a darkly comic and empathetic portrait of a disturbed mind. Is a movie in which Seth Rogen gets into a racist swearing match with a mall vendor (Aziz Ansari) worth all this fuss?

I think so, for “Observe and Report” is far different than your average raunchy comedy in that it raises pertinent questions about audience empathy – and Christian empathy in particular. Yet the negative response to the movie also has me wondering: Can Christian empathy go too far?

Let me first be clear that “Observe and Report” undoubtedly empathizes with Ronnie, its main character. Sure, many of the gags revolve around Ronnie’s risible job or his bipolar symptoms. Yet even as the movie seems to be setting Ronnie up for a laugh, it is subtly drawing us into his world, whether it’s with the tender conversations he shares with his alcoholic mother (Celia Weston) or the montage that traces the healing of his bruises after a particularly violent encounter of his own making.

This oddly sympathetic approach is a trademark of writer-director Jody Hill. Hill’s previous film, “The Foot Fist Way,” chronicled the dismal luck of an incompetent, strip-mall tae kwon do instructor (Danny McBride). The ultimate effect of Hill’s approach is that we come to experience these stories from their unhinged characters’ points of view – and that, after all, is how empathy begins.

Empathy, it seems to me, is a distinctly Christian trait. What is Jesus’ Incarnation if not the ultimate empathetic act? It was the truest way for Him to understand us. More than anything else, “Observe and Report” understands Ronnie, despite his delusions, his coarseness, his violence. He’s unclean, to be sure, but isn’t that the sort of person Jesus spent his ministry engaging? In its own crude and comic way, “Observe and Report” allows us to understand Ronnie too – and those in the real world who are like him.

If anyone else braved the movie, what was your reaction: empathy or disgust?