It seems that President Barack Obama’s recent comments on the Trayvon Martin-George Zimmerman tragedy have struck a deep chord in a lot of people.

As NBC news anchor Brian Williams rightly noted, “He’s the only president in our history who could speak personally on this subject.”

"Trayvon Martin could have been me 35 years ago."

“There are very few African-American men in this country who haven’t had the experience of being followed when they are shopping at a department store. And that includes me.”

“There are very few African-American men who haven’t had the experience of walking across the street and hearing the locks click on the doors of cars. That happened to me, at least before I was a senator.”

President Obama has walked in the same shoes as countless other African-Americans and knows their experiences of racial profiling - fully so, in every way.

So when he spoke his healing words, he brought an authenticity that only an African-American man could bring. And when he spoke them as the President of the United States, he carried an authority unlike any other.

We’re meant for the experience of hearing God tell us that He’s been there.

We're all meant to hear these kinds of words delivered in this kind of way: the most powerful voice conceivable speaking words that show he understands. We’re meant for the experience of hearing God tell us that He’s been there. We’re made to find deep meaning in that.

This isn’t to equate Obama with Christ, but to recognize that when he says what he says, he’s touching the most human nerve imaginable. He’s speaking to every human being who’s ever felt outside, left behind or least. He’s speaking to each sin-alienated, busted and broken human being on the face of this planet.

And as he’s doing that, he’s offering us a pointer to God.

Behind his voice there’s a Voice. There’s a Spirit inspiring his spirit of reconciliation, a holiness prompting his hope. And that’s why the president’s words on this matter are so powerful.

He’s voicing God’s hope for a future where there will be no black or white, Jew or Gentile, slave or free, nor male and female; a time when we’ll all be one in Christ Jesus.

It’s that hope that Obama has touched and awakened anew.

John Van Sloten is the preaching pastor of New Hope Church in Calgary and author of The Day Metallica Came to Church./ Photo via AP Images, with illustration by Jerod Clark. 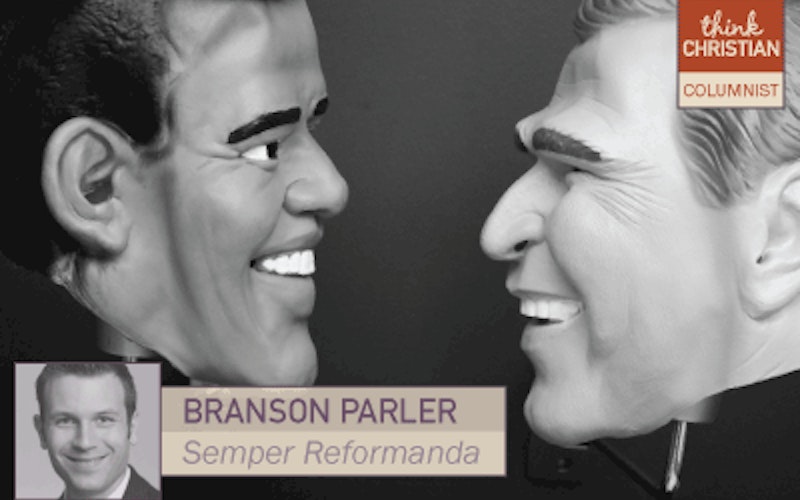