We all do it without thinking. For better or for worse, we visualize each persona of the Trinity in our heads. For me Jesus is the trickiest because of how much paint has hit canvas attempting to capture Him.

There are a few competing images that bounce about in my head. Probably the predominate image is a Sallman-ized Jesus smiling lovingly—pulsing with a holy aura. Now, I know that that Jesus is not a totally truthful representation of the Messiah, but it's hard to fight one's upbringing.

A few years ago I received this woodblock as part of an artist exchange: 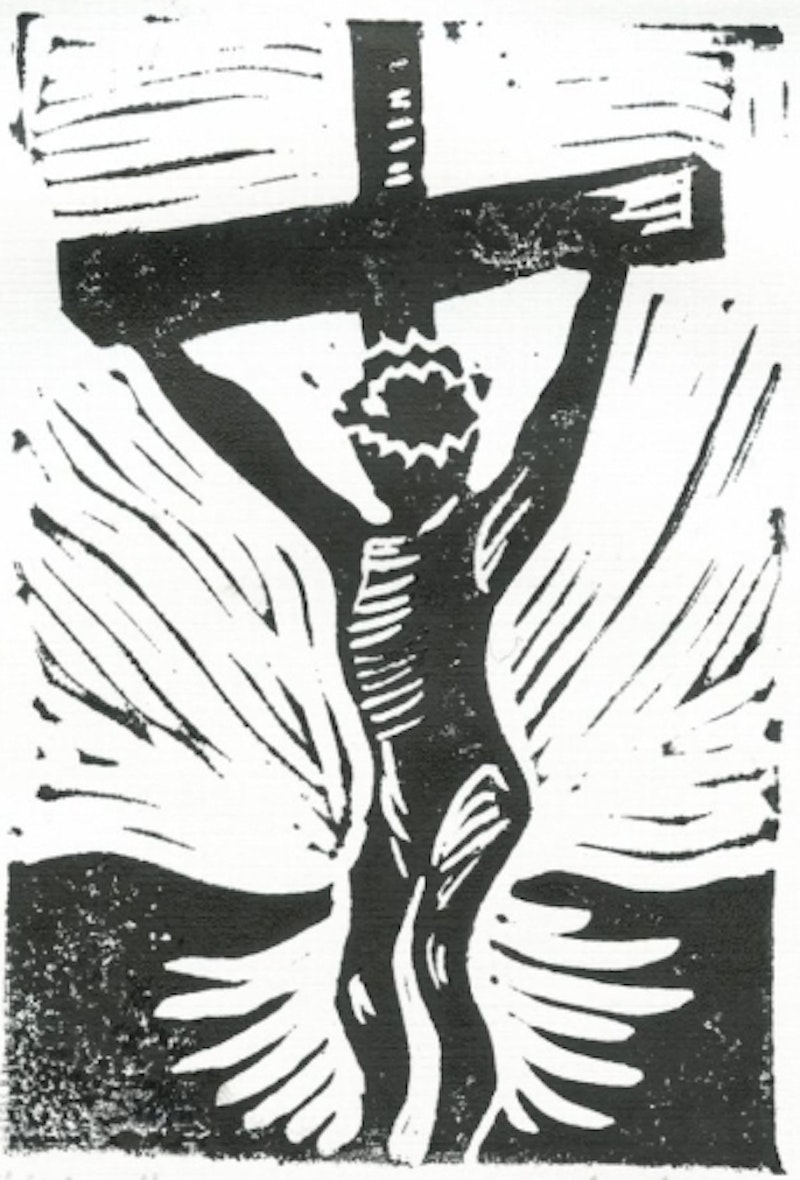 The piece is entitled "King" and it's by Bley Heck. It now hangs above my bed as the closest thing to a crucifix this protestant kid will ever have. It's a piece of art I don't think I'll ever get tired of: Jesus our King suffering and being exalted at the same time, and it's now inextricably part of my mind's eye picture of Jesus.

Yet, as we'll read from Asa Hart below, so often the picture of Jesus we create in our mind is based on our own conclusions of Him. Much like how Sallman's pictures are distinctly American, Bley's piece shows her particular view of the atonement.

As I said earlier, I grew up seeing pictures of Jesus frequently. In all of these pictures he was… well… white. This was of course gospel truth to me until I came across a picture of black Jesus. Shortly thereafter I saw a picture of Indian Jesus, Joseph, and Mary! Then in recounting my struggles to a friend, I was told of a picture she had encountered of a Korean Jesus! What the heck?

Then I realized something, the white Jesus whom the slave owners of the Old South sang about probably approved of slave ownership. The black Jesus I saw at the shelter probably gave little thought to abortion and had no desire for any welfare reform. The Korean Jesus was probably exclusively Korean in some form or fashion and most likely was somewhat approving of the sins which the Korean culture is prone toward. The Indian Jesus probably enjoyed peyote. Donald Miller’s Jesus was liberal as all get out and probably went around everywhere confessing the sins of his disciples. Asa Hart’s Jesus was a white guy who thought that Asa was a pretty good guy, and that all glory and honor should go to Asa, after all when Asa’s Jesus was on the cross Asa was on his mind. The Jesus I knew a few short years back was a rebel like me, who confronted the ultra-religious Pharisees because he was authentic… like me.

The difficulty in painting Jesus, in describing who He is, is the difficulty of abandoning one’s bias and preconceived ideas – it is impossible to be done in such a manner which would merit the credibility of the inspired Gospel accounts. This is precisely why we were given the Gospels. The revelation of Christ in Scriptures is the only source to be trusted.

And likewise, the image of Jesus in my head is a confabulation of artwork (both Sallman and Bley's included), writings, songs and experience. It's actually pretty convicting to think of how we can construct a Jesus almost totally devoid of upon—as Asa puts it—what the gospels actually say.

How do you sort through all the differing interpretations of Jesus? Do you fight against the cultural Jesus' you've grown up with? Other thoughts?

[PS I'd be interested if you too have a piece of art that has impacted the image of Jesus in your head. Link to it in the comments if possible. And a big hat tip to Trevin Wax for pointing me towards Asa Hart's article.]