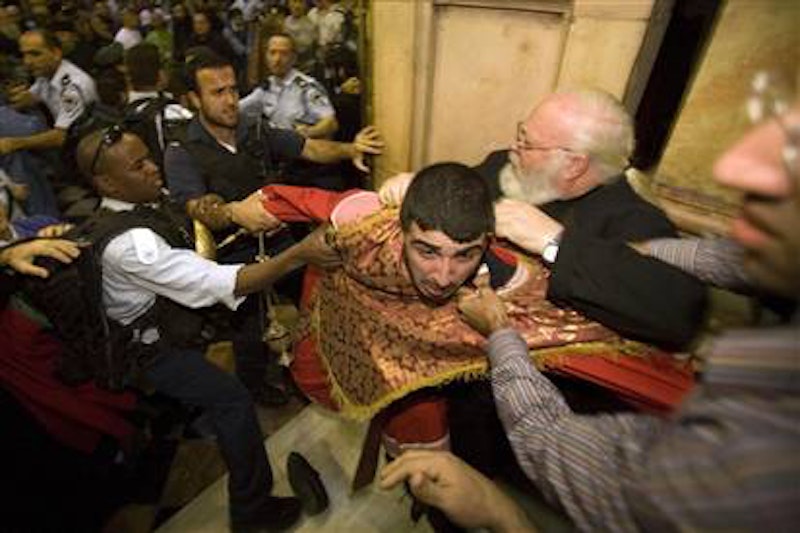 I'm a Biblical archeology fan. I love learning how the people of the Ancient Near East lived and saw their world. Understanding something of the Bible's original context is hugely important for a deep and proper understanding of Scripture.

But we live now, where we're still as goofy as ever.

The folks at Biblical Archeology Review recently posted a news item (covered by the BBC) about monks fighting at the tomb of Jesus. The Holy Sepulchre is maintained by groups from several different Christian traditions, by what appears to be a rather testy agreement. So it seems the Greek clergy had tried to post one of their monks as a 'guard' inside an inner chamber where Armenians were in the middle of a service. This fight had been brewing for a long time, and it erupted into a fistfight between clergy in full robes, to the point where Israeli police had to step in.  (Here's the video.)

There's so much to say here about relics, and ecumenism, and Christian witness, that I'm really just left speechless. It's really the sort of ironic thing you'd expect to see in Lark or the Onion.

But before we point any more fingers, which one of us hasn't been caught up in in-fighting? What congregation doesn't have factions that play power politics in order to do get things their way? Why do the New Testament writers keep calling for humility and unity in the church?

We are screwed-up people, especially we Christians, who ought to know better. But though we are Christ-followers, though we seek to be transformed by the Spirit to be more of the way we were intended to be, we are still broken. We still push and then shove for our way of doing things.

Wouldn't it be cool, if instead of claiming we sin less than anyone else, we demonstrate that we try hard to forgive? Wouldn't it be a powerful witness if we publicly reconciled with those whom we fight? If we apologized for being a mess? If we welcomed back to our midst as co-sinners those who had scandalously sinned? Is church a place for proper people to pass condemnation on the morally deficient? Or is it a safe place to be a mess?