Rethinking calls for prayer in the wake of the Charleston church shooting.

"How long, Lord? Will you forget me forever? How long will you hide your face from me?” – Psalm 13:1

The scene was familiar and jarring. With a massive police presence as a backdrop, African-American men and women gathered in a small prayer circle near Emanuel African Methodist Episcopal Church. The historic Charleston, S.C., church had been the site of a massacre during its regular Wednesday night Bible study, with nine people gunned down in what police said was a hate crime. Among the deceased was the pastor of the church, Rev. Clementa Pinckney, who was also a South Carolina state senator. The suspect, 21-year-old Dylann Storm Roof, entered the church and participated in the Bible study before opening fire. He was arrested hours later in Shelby, N.C.

In the hours following the attack, prayer vigils were planned, people of faith were urged to pray and many called for peace in the larger African-American community, of which roughly 87 percent report a formal religious affiliation.

But others, including some on Twitter and Facebook, have grown frustrated with the calls to pray. Among the sentiments expressed:

“Don't tell me that prayer alone can fix anything.”

“Tears and prayer are not enough.”

“I’m a Christian. Saying this is a time for prayer in lieu of mobilizing and direct effort when the people were killed praying is … troubling.”

If your God wants you to sit around ‘just praying’ instead of taking action, that's cute for yall. Me and my God are in another lane.”

These sentiments, while not new, have been building, said Rev. Broderick Greer, an activist who next month will become curate at Grace-St. Luke’s Episcopal Church in Memphis, Tenn., after earning a master’s of divinity degree from Virginia Theological Seminary.

“I think that frustration is coming to fruition now because there’s an expectation that prayer is a transformative ritual, that there’s some sort of transformation that occurs,” Greer told me in an interview. “Here you have black people praying and studying their Bible in a sacred space set aside for such rituals, and they’re not immune from the violence. We pray in expectation that things will change and they don’t.”

I believe it is not enough to speak these prayers.

I am among the 87 percent. I believe that my prayers are powerful. And I have made the case for prayer in the wake of tragedy in our community before. This time, however, is different. These victims were in their church and opened the door to the alleged shooter. They were killed simply for being black. It is simple. It is not difficult to understand. Unless you refuse to acknowledge the scourge of racism. The AME nine were killed in a house of worship. My mother attends weekly Bible study at her neighborhood Baptist church. It could have been her.

I have still prayed - once again for justice and mercy - and I will continue to pray. Yet like those who have expressed frustration, I believe it is not enough to speak these prayers. We must also take action. We must rise up. We must do battle against the forces of evil and hatred in this world that devalue and seek to extinguish black life. We must call this evil act what it is: racism and white supremacy.

Prayer comes in many forms, said Greer. Prayer can encompass protesting in the streets and going to the halls of government to demand that African-Americans be recognized as full citizens deserving of full protection. “It is not just heads bowed,” Greer told me. “It is also waking up every morning and looking in the mirror and saying, ‘I am fearfully and wonderfully made, and I’m not going to put up with the oppressive forces in this world.’”

Kimberly Davis is working on her Ph.D. at the University of Maryland’s Philip Merrill College of Journalism, where she researches the intersection of religion, media and politics. Follow her on Twitter as @KDavis. 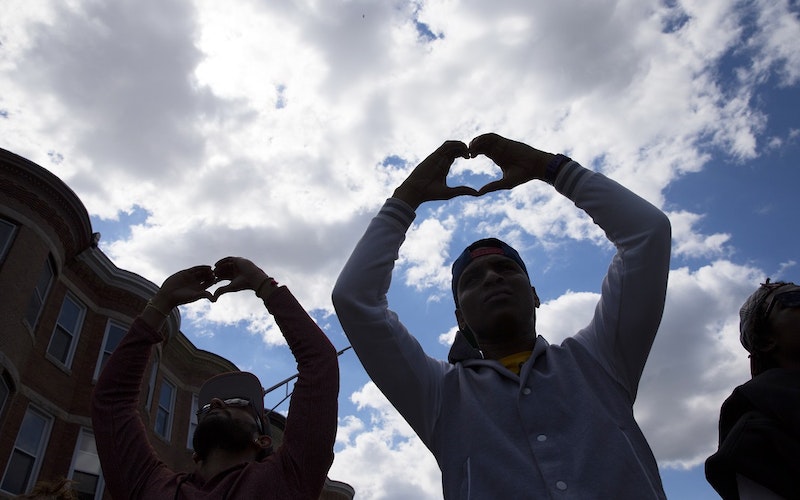 Baltimore and the prevailing of peace

My prayer for Ferguson