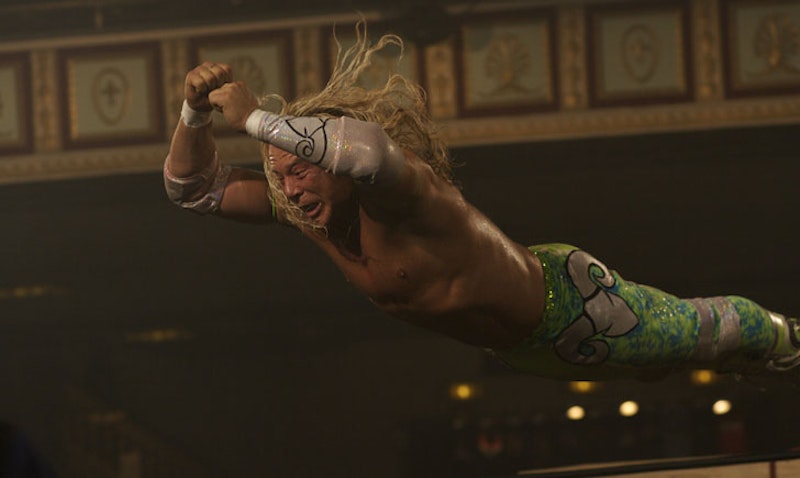 An interesting discussion emerged a few weeks ago on ThinkChristian regarding the value of redemptive characters in movies. (It was tied to the Seth Rogen raunch fest “Observe and Report.”)

Those of us who debated the worth of the movie were left wondering: If a despicable character fails to achieve redemption by a film’s end – fails to show “at least some reflections of Divine light sneaking through,” in the words of one commenter – is there any point to watching the film in question?

“The Wrestler,” which recently came out on DVD, serves as an interesting test case for this debate. Oscar nominee Mickey Rourke certainly plays a disreputable character. Randy “The Ram” Robinson is a once-heralded, now-disgraced professional wrestling star of the 1980s who still haunts community centers and VFW halls grappling with far younger men in search of some sort of ghostly glory. Estranged from his daughter, the only human connection he has is with a desperate single mother named Pam (Marisa Tomei) who performs at the local strip club.

“The Wrestler” is mired in this sort of seediness – Randy’s beer can-strewn van and Pam’s sleazy stage are outward representations of the characters’ decaying souls. Yet there is something noble about these people too. I wouldn’t go so far as to liken Randy’s suffering to that of Jesus, as Pam does (she says that Christ, like Randy, was a “tough dude”). But I would note that Randy endures his increasing indignities and humiliations with pluck, determination, even dignity. Rourke, miraculously, connects us with the human beneath the bloated bulk.

Still, that doesn’t mean Randy is a redemptive character. I won’t spoil the ending, but suffice it to say, if Randy achieves any sort of redemption with his final act it’s of the personal – not eternal – variety.

So why bother, then, with his story?

Even if Randy isn’t saved at the end – indeed, you could argue he dooms himself – I’d argue his story still matters.

Perhaps the question, for Christians, shouldn’t be whether or not a movie (or book or television) character turns from his errant ways. Maybe we need a gauge that is at once broader and more personal. Maybe we simply need to ask, after watching a movie, How did you feel when it was over?

Sickened or dirty? Then it probably wasn’t worth your time.

Titillated? Then it probably should have been avoided, like all temptation.

Guilty? You were probably titillated, but didn’t want to admit it. (Also not good.)

However, what if you were distressed by what you saw, but also came away with a better understanding of the brokenness of our world and the damaged people living here? Now we’re getting somewhere.

And what if a movie made you feel empathetic toward damaged people to the point that you were inspired to address the issue in the real world in some practical way? Now that’s something that could almost be called holy.

So how did “The Wrestler” make me feel? Similarly to the way “Observe and Report” did: Less judgmental and more open to the pain of a person who is far, far outside of my comfort zone. And I think that can only be a good thing, whether the main character is ultimately redeemed or not.