A "new" Rembrandt painting produced by a computer reminds us that God is the only one who truly creates.

As someone who was steeped in Christian tradition, Rembrandt must have known that he never really “created” anything. His calling was to capture the works of Another. Whether he was painting a fellow human being, a tableau based on a Bible story or the intricate lace on a woman’s dress, Rembrandt surely knew that his paintings were always derivative — copies of things Someone else had made.

Ironically, then, Rembrandt may have felt toward his own paintings what art lovers are now feeling as they observe the Next Rembrandt project, a computer-generated painting meant to pass as one of the 17th-century master’s works. “It’s a beautiful painting, and oh so close,” has been the general reaction, “but it’s not the real thing. A wonderful imitation, but not the original.”

Begun as part of a branding campaign for a bank, the Next Rembrandt project brought together a team of software engineers and a group of art historians. Together they developed an algorithm that generated a “new,” Rembrandt-like painting.

There is a theological doctrine that holds that God is the only one who created “ex nihilo” — out of nothing. Everything that is was borne out of God’s imagination. God didn’t take materials that already existed and work with them; He generated those materials in the first place. God, therefore, is the only one who truly creates.

Seems everyone is using everyone else’s stuff, all of it first made by God.

So when a software engineer’s algorithm finds a way to capture the light in the same way Rembrandt did, when it discerns which facial pixels are most relevant and when it layers the printer’s ink to replicate the 3-D nature of a real painting, it’s only a replication of the things that Rembrandt received from God. God created the original subject of the painting (along with light, color and form) and He also made the creative imagination, the attention to detail and the high level of craft that enabled Rembrandt to capture the image — and then the Next Rembrandt project to capture Rembrandt’s image.

It seems everyone is using everyone else’s stuff, all of it first made by God.

Vincent van Gogh, in a letter to his friend Bernard, summed it up well as he tried to capture, with words, the cosmos-creating nature of Jesus Christ:

He lived serenely, as a greater artist than all other artists, despising marble and clay as well as color, working in living flesh. That is to say, this matchless artist, hardly to be conceived of by the obtuse instrument of our modern, nervous, stupefied brains, made neither statues nor pictures nor books; he loudly proclaimed that he made... living men, immortals. ...These considerations, my dear Bernard, lead us very far, very far afield; they raise us above art itself. They make us see the art of creating life, the art of being immortal and alive at the same time.

We all feel that what we make falls short. This feeling is a reminder that we are not God. And we all feel a passion to capture and experience the true essence of created things (in nature or human nature). This yearning is something God has placed within us, to compel us to find Him. Recreating a Rembrandt in the truest form humanly possible is evidence of our desire to image the fullness of Christ. Computer algorithms and great artists may come close to imaging a creator God. But none can ever touch the original. 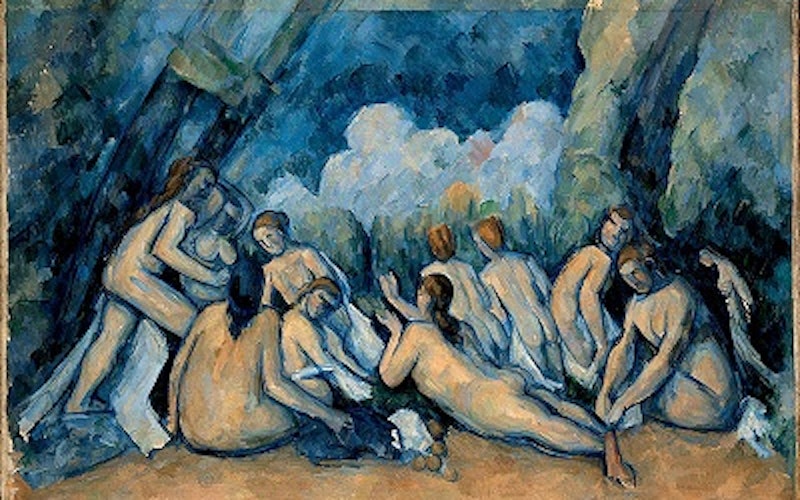 The creaturely work of Paul Cézanne