Darren Aronofsky's dark take on Noah made me realize how much this prophet of doom needed the atoning grace of Jesus.

Noah doesn’t quite work as a movie – it’s ungainly, unwieldy and unsure of whether it wants to be a fantasy epic or an intimate family drama – yet I was intrigued by how Old Testament it felt. If nothing else, Noah captures what it might have been like to live as a follower of God before the cosmos-altering arrival of Jesus.

In this telling of the Bible story, loosely adapted by director Darren Aronofsky and co-screenwriter Ari Handel, such times weren’t pretty. Noah presents a desolate, apocalyptic landscape seemingly abandoned by God. In that absence, a ravenous king (Ray Winstone) has declared himself almighty and ushered in an era of death, desperation and evil. Only Noah (Russell Crowe) still waits on the will of the Creator (as God is called here). After a series of visions, Noah comes to believe he’s heard a divine call: to gather the creatures of the earth into the ark while the Creator wipes out the rest of humanity with a global flood.

Aronofsky holds nothing back in his depiction of a wrathful God. Consider a central battle sequence, in which Noah defends the ark from the king’s soldiers with the help of towering rock giants. (I told you the movie was loosely adapted.) As the soldiers attack, they’re swatted and stomped by the giants as if they were insignificant bugs. Later, after the waters have begun to rise, we get one of the film’s most striking shots: people clinging to a rocky precipice while being battered by violent waves. Full of agony and horror, the image could have been pulled from one of the doomsday paintings of Hieronymus Bosch.

This is a Pentateuch movie aching for the New Testament.

Things only get grimmer from there. Once on the boat, Noah comes to an awful realization. “The wickedness is not just in them,” he says of those screaming outside the ark’s walls. “It’s in all of us. We were selfish to think we could set ourselves apart. We will work. We will complete the task. And then we will die, like everyone else.”

In this telling, Noah’s understanding of God’s plan for the earth is that it will never again involve people. And while that’s counter to my reading of Genesis 6, the emphasis on Noah’s self-loathing over sin made me realize, more than ever, how much a determined prophet of doom like Noah needed the atoning grace of Jesus. This is, in essence, a Pentateuch movie aching for the New Testament.

It’s fitting, then, that Jesus mentions Noah, even if it’s in a different context. Noah is acting as an agent of justice – and in the bleak landscape of this movie, justice can only be had through death. Crowe’s Noah is right, after all, sin is in all of us. Thankfully, in Jesus, God had a different plan for making things right - one more radical than Noah could have ever imagined.

Josh Larsen is editor of Think Christian. He also writes about movies at LarsenOnFilm and is the co-host of Filmspotting. Connect with him on Facebook, Twitter and Letterboxd. / Image via Paramount Pictures, with illustration by Jerod Clark. 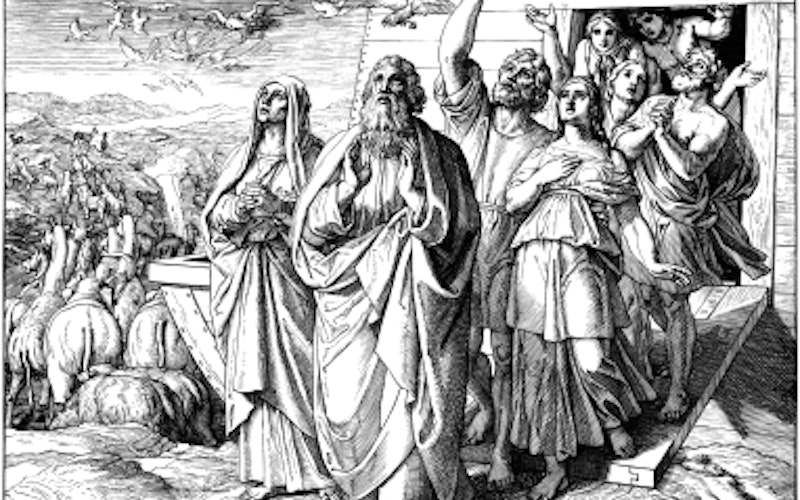 Can Noah's ark still save?