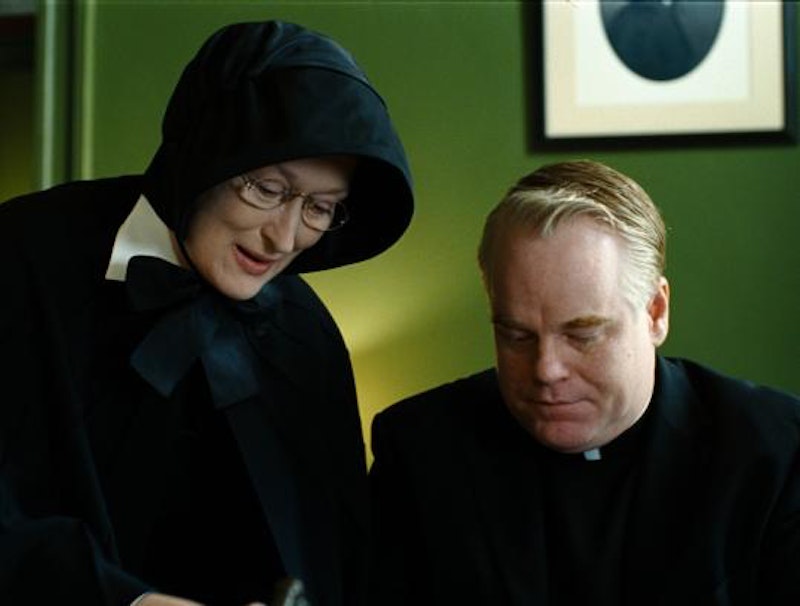 It looks like there will be a lot of clergy members at the Academy Awards ceremony on Feb. 22.

Well, maybe not actual pastors, priests and nuns, but at least the actors and actresses who have portrayed them.

The religious drama “Doubt” has been nominated for five Oscars, including a Best Actor nod for Philip Seymour Hoffman; a Best Actress honor for Meryl Streep; and a Best Supporting Actress nomination for Amy Adams.

In the film, which writer-director John Patrick Shanley adapted from his own play, Hoffman and Streep play a parish priest and principal, respectively, who square off when she insinuates that he has abused an altar boy. Adams plays the junior nun caught between them.

Aside from the obvious ethical and moral questions swirling about, the movie poses an interesting query for those who lead or regularly attend churches: What is the “correct” way to minister to the people of God?

Streep’s Sister Aloysius Beauvier takes the hard-edged, old-fashioned approach. She rules her school with a suspicious eye and an iron fist, hovering in hallways and at the back of classrooms just waiting for a student to break the rules. In her view, to be a member of the cloth is to enforce the Old Testament law of God.

Hoffman’s Father Brendan Flynn sees things differently. “Doubt” is set in 1964, and Father Flynn reflects the changes that would come to the Catholic church with Vatican II. He encourages Sister Aloysius to include a secular song in the annual Christmas pageant as a way of making the program more accessible to church visitors. He befriends the students, even offering them consoling hugs when they’re upset.

That last tendency is one piece of evidence in the case Sister Aloysius begins to build against Father Flynn. The provocative thing about “Doubt” – and about Hoffman’s intricate performance in particular – is that you never really find out whether or not Father Flynn is guilty of sexual abuse. Instead, the picture seems more concerned with lesser, more insinuating sins: intolerance, impropriety, gossip.

Father Flynn’s touchy-feely personality leads him vulnerable to some of these human frailties. Sister Aloysius’ moral paranoia makes her susceptible to others. Is there an ideal ministering “style” that sidesteps such land mines? Or do we simply have to accept that the pastoring process - like all human endeavors - is fallible and imperfect?

I wonder what you’ve experienced. For those of you who are members of the clergy, what approaches have been the most effective? For congregants, what ministering method has been most helpful to your faith?

Beyond that, I’d also love to hear what fellow believers thought of “Doubt” - the rare, religious-themed film to get Oscar’s attention.

Topics: Movies, Culture At Large, Theology & The Church, The Church