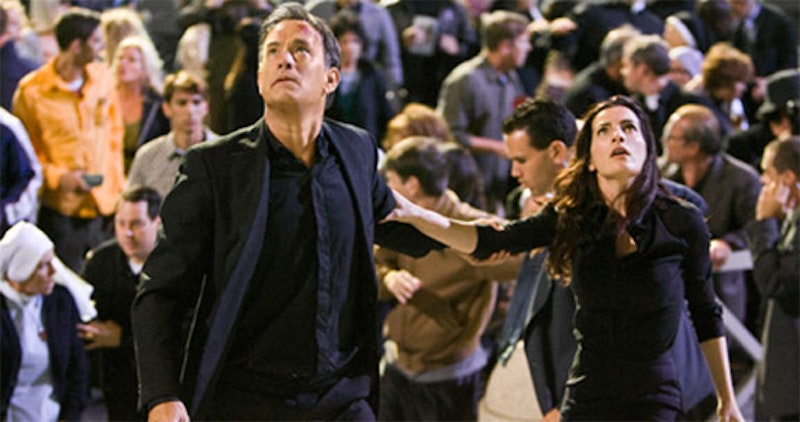 Are Christians any better off now that Hollywood is paying attention to us?

Since 2004’s surprisingly, wildly profitable “The Passion of the Christ,” major studios have been trying to court religious audiences – sometimes successfully (“The Chronicles of Narnia: The Lion, the Witch and the Wardrobe”), sometimes not (“The Nativity Story”).

Into this post-“Passion” landscape comes “Angels & Demons,” an adaptation of the Dan Brown novel about a murderous conspiracy plot within the Vatican. Unlike its predecessor – 2006’s “The Da Vinci Code,” which rode its controversial plot line to $758 million in worldwide box office – “Angels & Demons” takes great care to placate the sensibilities of believers in the theater while still dealing in religious exploitation. The result is a bland, watered-down “thriller” that shouldn’t please anyone.

“Angels & Demons” proceeds at a breakneck pace – Tom Hanks, as Harvard professor Robert Langdon, races around Rome trying to find a bomb and a passel of kidnapped papal candidates – yet the movie is exceedingly dull and not at all provocative. Indeed, behind the scenes at least, a lot of tiptoeing seems to be going on – the filmmakers balance every anti-church tit with a pro-religion tat.

The result has been a fairly muted reception. Sure, the Catholic League’s Bill Donohue has been railing against the film, as expected, and Westminster Theological Seminary has launched a website meant to distinguish “firm facts from an entertaining storyline."  But for the most part the picture’s release has been greeted with little controversy.

That’s largely because there’s not much in “Angels & Demons” to get worked up about – and that’s by the filmmakers’ design. Indeed, if the movie is offensive at all, it is in the way it panders to Christian audiences, pretending to take religious themes seriously when in reality they’re only used as fodder for hot-button thrills.

The plot – and this is a movie that fares better the less time you spend thinking about the plot – involves the Illuminati, a secret society that for the picture’s purposes has been waging an underground war with the Catholic Church for centuries. The bomb has been planted as revenge for what the Illuminati claim is the church’s history of persecuting scientists and snuffing out scientific progress.

The science versus religion debate gets a lot of lip service in “Angels & Demons.” Ewan McGregor, as the Vatican’s Camerlengo, at one point stops the movie dead in its tracks to preach a benign sermon on the subject. Yet such scenes play as bones being thrown to religious audiences. See, the filmmakers seem to be saying, we’re considering your side too.

The movie’s most awkward instance of pandering comes near the end, when we’re told that the newly elected pope has chosen to be called Luke. Not trusting the believers in the audience to know their own Bible, a character points out that the Luke of the Gospels was both a physician – a man of science – and a follower of Jesus.

"That’s quite a message,” she says, all but looking directly into the camera, hoping to make direct eye contact with the Christians in the audience. If you’re smart, you won’t be in the theater to return her gaze.