Underneath its everyday delights, the children’s series has a heart for the eternal.

If you have a child in your life, you’ve probably heard of Bluey, an animated series from Australia. Phrases from the show such as “for real life?!,” “aw, biscuits!,” or “here come the grannies!” have become commonplace in my home. Yet more than just a trendy kids’ show, Bluey manages to be both incredibly mundane and revealingly transcendent.

Currently streaming on Disney Plus, Bluey tells slice-of-life stories about a 6-year-old Blue Heeler puppy and her 4-year-old sister Bingo—along with their dad Bandit, mom Chilli, and a collection of extended family, friends, teachers, and neighbors. The series depicts a vision of life as it should be lived, celebrating the small, daily things while always keeping an eye on the eternal.

For example, the Season 1 episode “Camping” manages to take the simple activity of a family camping trip and transform it into a melancholic yet hopeful meditation on both the transience of life and the deep connections we can make as humans. Bluey meets a French-speaking Labrador pup named Jean-Luc and befriends him, despite their lack of a shared language. They build a lean-to together, plant a seed in the ground, and engage in imaginative play chasing a “wild pig” (actually Bluey’s dad Bandit). However, Jean-Luc’s family leaves before the seed sprouts, leaving Bluey feeling sad. Her mom reassures her that she might see him again because “the world’s a magical place.” A montage of the sprout growing into a tree signifies the passage of years, until a much older Bluey returns on vacation and sits to read a book under the tree, where Jean-Luc appears and says hello.

“Camping” is a typical episode in many ways; it focuses on children playing imaginary games together, while gently bringing to focus the inner life of a child. The animation broadens the story in unexpected ways, taking the time to show the sunken stream bed in clear blues, greens, and reddish-brown clay; a night sky suddenly transformed, as a nightlight turns out, into a dazzling array of twinkling stars; or a seedling with salmon-colored leaves vividly blooming in contrast with the green trees surrounding it. This is no small feat for a show with seven-minute-long episodes! In a short time, “Camping” manages to depict a world of sadness, hope, and unexpected joy through serendipity.

For me, Bluey’s tree evokes the tree of life in Revelation 22:2, “yielding its fruit every month. And the leaves of the tree are for the healing of the nations.” Bluey and Jean-Luc’s friendship appears to be the type of friendship that we hope for in Christianity—a relationship founded on a recognition that any person, regardless of appearance, nationality, or language, can be a sibling in Christ. Through the planting of a tree, building together, and a mutual triumph, a friendship is forged simply because two people were determined to befriend one another. What greater “healing for the nations” could there be?

Bluey manages to be both incredibly mundane and revealingly transcendent.

Another standout episode is “Flat Pack,” from Season 2. In it, Bandit and Chilli are putting together a flat-packed piece of furniture, the kind that comes with pictures instead of text instructions. For the Heeler girls, each bit of packaging tossed aside by their parents becomes inspiration for an imaginary game. First Bluey plays a “mama” fish while Bingo plays the “baby” fish. The game continues as the girls follow an evolutionary progression from fish, to frogs, to dinosaurs, small mammals, monkeys, “cave dogs,” “builders,” and finally astronauts. Bingo’s launch as an astronaut happens just after the porch swing is finished. When Bluey asks, “Now what do I do?,” her parents offer a hand up onto the swing (a moment animated in a way that recalls Michelangelo’s “The Creation of Adam” in the Sistine Chapel). As Bluey sits on the swing, Bandit says, “This is heaven!”

This scene brings to mind Revelation 21:2-3, where John sees the new heaven and earth: “I saw the Holy City, the new Jerusalem, coming down out of heaven from God, prepared as a bride beautifully dressed for her husband. And I heard a loud voice from the throne saying, 'Look! God’s dwelling place is now among the people, and he will dwell with them. They will be his people, and God himself will be with them and be their God.'” The end of Bluey’s game with Bingo is a death of sorts for her, yet she is invited to a new reality, where she can enjoy comfort and rest with her parents, similar to our own future dwelling with God.

It is thrilling to see such a finely crafted show for children become so popular. Bluey offers a path toward the eternal life that God invites us into every day. When we are able to look closely at the beauty of the world God created for us and celebrate the mundane things, while reaching out to the people around us to make deep and lasting connections, we are doing the work God calls us to. As you live your days, find the joys around you. Open your heart to those who enter your lives, even if for only a short while. Who knows what you’ll find in this magical world God has created and chosen to dwell in with us? 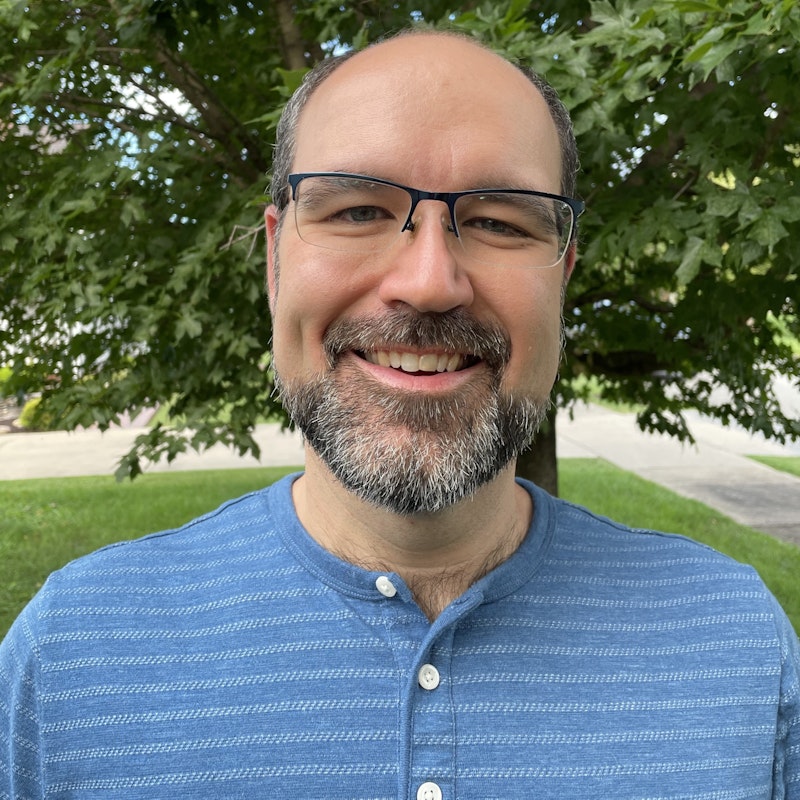 BJ Krug is a writer and storyteller who lives in East Tennessee with his wife, Emily, their two children, and altogether too many board games. His day job is as a pediatric occupational therapist, with a passion for children’s development, health, and spirituality.