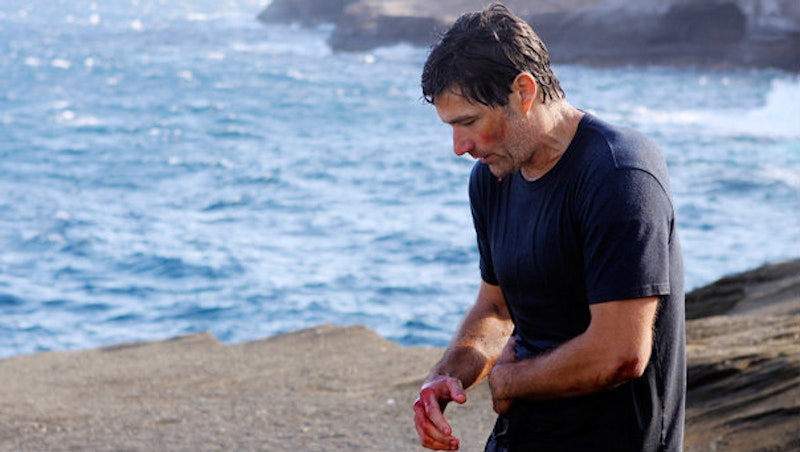 WARNING: SPOILERS Do not read this if you haven't seen the Lost Finale.

Until the final scenes in a Los Angeles church, I was completely in love with the Lost series finale. And then Christian Shephard spoke.

I have always viewed Lost as a network TV equivalent to metaphoric literature—a great fable or legend epitomizing or explaining the human journey—similar to Pilgrim's Progress or something C.S. Lewis or G.K Chesteron would write. However, as I sit here the day after the full story has been revealed, I regret that Lost did not end up having one specific trait in common with the works of Flannery O'Connor, Lewis and Chesteron: a clear and definite belief system behind the story.

Instead, the resolution provided by Christian Shephard for the show's "sideways world"  hit the easy button. As the writers took the show into the afterlife, it seems they opted for a safe, politically-correct explanation—exemplified by the church's stain glass window featuring symbols of all the major religions. I didn't need the show to be an allegory or defense for Christian beliefs. I merely wish the show would have picked a lane: to clearly have a defined truth behind the story and not a vague fluffy answer to suit our "everyone has their own truth" society. What we were left with feels like a C.S Lewis fantasy for our post-modern, tolerant, mushy-truth generation. It seemed to all just come down to "love."

A case could be made post-finale that underlying Lost was a humanistic and even cynical metaphor for religion and how we view the mystic. Here on this wondrous island full of seemingly spiritual or magic powers, humans (from the Man in Black’s human counterparts to Dharma) sought to understand this place—and came away with very little other than their own endeavors. And in these last several episodes, the mysticism and magic seems to have been drained. For instance, those in authority knew no better and were no less flawed than those hoping for meaning. In addition, last night's transition of power to a new island protector lacked any supernatural ritual as if to say there was nothing larger at work here. Nothing mystic. No mystery and wonder. Just being sworn into office. And as island citizens struggled for meaning about their lives and to figure out redemption, it became clear that this was a humanistic endeavor that began with humans and ended with humans. Their life, death, salvation and destination depended on them.

But yet, while my head struggled with the resolution, my heart was completely emotionally fulfilled. Logically and intellectually, it didn’t suit me. But emotionally, it did. The on-island story was handled powerfully and fittingly to show a community working out their lives together with sacrifice, encouragement, forgiveness, care and burden-carrying. And that is the one clear Lost message I am choosing to latch onto: We need each other. Live together, die alone.

Because Lost is so open for interpretation, I want to hear what other Christ-followers took out of it. On the TC Facebook page, we’ve had some great comments like these:

“I certainly don't think you can put a nice clean Christian or Bhuddist or any other religious tag on the show. In the end, the show seemed to place more ‘belief’ in relationships than any specific dogma.” –Mike

“I feel like the writers took the easy way out. Rather than giving us a solid worldview, they just went with the PC ‘it is what you make of it’ view.” –Katherine

So, what did you think?

Todd Hertz (@ToddHertz) is the General Editor of The Quest Study Bible for Teens (Zondervan) and Communications Director of Chicagoland's Christ Community Church.