A parable for our current political landscape, the HBO mini-series reminds us that the truth - even if it’s inconvenient - will set us free.

In the first episode of HBO’s acclaimed mini-series Chernobyl, a group of petrified Soviet bureaucrats convene in the early morning hours to discuss how best to manage the worsening nuclear crisis before them. The men in the room still refuse to believe that a few hours earlier the core of one of Chernobyl’s nuclear reactors mysteriously exploded, bombarding the surrounding area with deadly radiation. Instead, they cling to the increasingly inconvenient falsehood that they are only dealing with a minor accident.

As they discuss evacuation options, an unnamed elderly gentleman in a black suit ceremoniously thumps his cane and rises. With soaring rhetoric akin to a tent revival, the mysterious man implores, “Our faith in Soviet socialism will always be rewarded. The state tells us the situation here is not dangerous. Have faith, comrades.” In response to the potential for a public panic, the man in black continues, “We seal off the city. No one leaves. And cut the phone lines. Contain the spread of misinformation. That is how we keep the people from undermining the fruits of their own labor.” He concludes with a message of salvation: “Yes, comrades, we will all be rewarded for what we do here tonight. This is our moment to shine.”

The unnamed man’s secular sermon comforts and convicts the room. Their faith restored, the bureaucrats enthusiastically pound at the table, joyously resolving to continue a policy of denial and evasion that will ultimately lead to illness and death for countless innocent people, their own families among them. However misplaced, these foolish men show stunning faith—faith in a lie.

Chernobyl repeatedly illustrates the dangers of putting our faith in the wrong places. Watching the series, Bob Dylan’s iconic anthem, “Gotta Serve Somebody,” played on a loop in my brain. In the Bible, Joshua implores, “choose for yourselves this day whom you will serve.” For Dylan, the decision ultimately comes down to two choices: the devil or the Lord. Of course, some of us choose to serve money, sex, status, or political power. The latter especially applies to Chernobyl. While Christians are called to engage in public life, we must still remember that “no one can serve two masters.” Chernobyl artfully reveals that denying the truth in order to zealously serve a lie leads to devastating results.

In what could be viewed as a cautionary parable for contemporary public life, Chernobyl brims with examples of uniformed politicians recklessly denying scientific evidence. When he learns that a mid-level official established an inadequate evacuation radius around Chernobyl, lead scientist Valery Legasov (Jared Harris) protests, “Is this really the way it all works? An uninformed arbitrary decision that will cost who knows how many lives made by some apparatchik, some career party man?” Despite the truth of Legasov’s claim, the evacuation radius does not change.

Likewise, when nuclear researcher Ulana Khomyuk (Emily Watson) loses her cool after witnessing the careless medical treatment of first-responders, she proclaims, “People are going to hear about this.” Before she can restrain herself, a plainclothes KGB agent steps from the shadows and asks, “What is everyone going to hear?” Khomyuk soon finds herself incarcerated. Both of these examples portend the dangers of ignoring scientific truths in order to perpetuate self-interested lies. Then, as today, serving the short-term interests of popularity and prosperity replaces truth with idolatry.

Understandably, the scientists at Chernobyl conform. (Spoilers ahead.) Although he eventually discovers that a mechanical design flaw played the decisive role in the reactor’s explosion, Legasov omits this key finding from his presentation to the international community. His exculpation of the Soviet state makes the admittedly inept managers of the facility the sole scapegoats. For this lie of omission, Legasov is promised the Order of Lenin, the highest honor given to civilians.

Serving the short-term whims of popularity and prosperity replaces truth with idolatry.

In “The Power of the Powerless,”a 1978 essay by Václav Havel, dissident author and eventual president of the Czech Republic, Havel offers the phrase “living in the truth” as an incremental method of political resistance. Essentially, Havel advises enlightened citizens—people like Legasov and Khomyuk—to refuse to conform to the lies of the state, even if there will be inevitable consequences. In the HBO series, Legasov gets a chance at redemption when providing testimony at the criminal trial over Chernobyl. During his riveting testimony, Legasov divines Havel’s advice by finally telling the whole truth about the state’s shameful culpability in the nuclear accident. This reckless moment of righteousness is as dramatic as it is holy.

Chernobyl accurately teaches that living in the truth does not come easily. Stripped of his status and livelihood, Legasov predictably suffers the earthly consequences resulting from his flash of integrity. As depicted in the series, the punishment reduces him to a man huddling in the dark, perpetually looking over his shoulder. While necessary, noble, and redemptive, telling the truth comes at an earthly cost.

Hopefully, as Christians, we will know what to do when the mysterious man in a black suit metaphorically steps forward into our world, peddling lies that seem so much more convenient than the truth. He may tell us that climate change is a hoax, or that our immigrant neighbors are our enemies, or that citizens who refute his lies should go back to where they came from. He may even tell us to put our faith in him.

Though truth-tellers may suffer in the short term, Chernobyl’s witness makes clear where our faith belongs. As Christians, we follow the embodiment of “the way and the truth and the life,” secure in our knowledge that “the truth will set you free.” 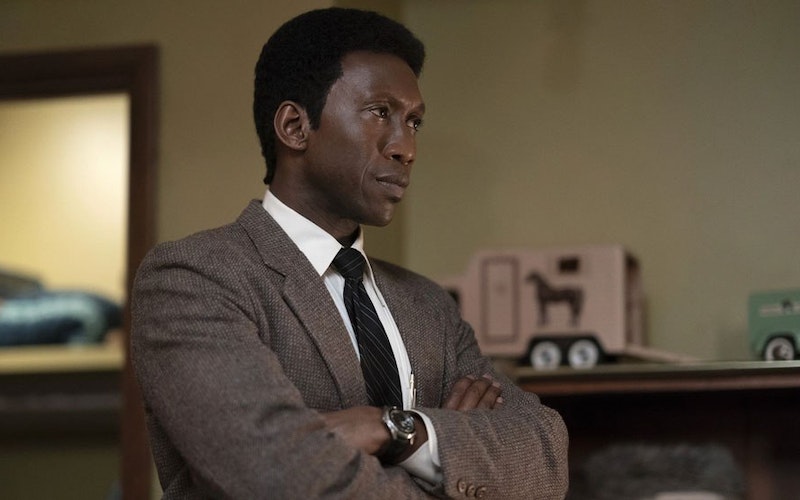 Learning and Unlearning in True Detective