From a Star Wars story to a World War II tale, here are five movies that recall the magnitude of Christ’s crucifixion.

Good Friday is one of the most powerful days of the liturgical year. The day strikes a balance between the darkness of fear, sorrow, and uncertainty, and the bright dawn of Easter that is to come. We know good is coming, but for the moment, we’re asked to sit with the disciples in their sadness and to consider the weight of Christ’s sacrifice for us, in both the corporate and personal sense. It’s the Bible’s ultimate moment of narrative tension.

In addition to our liturgical practices at church, movies also offer a way to engage with the themes of Good Friday. Below are a few recommendations.

Part of Good Friday’s power lies in the deeply relatable feelings of the figures involved. Leading up to the day itself, we witness Jesus’ vulnerability in the Garden of Gethsemane and the disciples’ desperate attempts to fight the Roman soldiers when he’s arrested. We also encounter the grief of Jesus’ family and followers upon his death.

Those same emotions propel 1986’s The Mission, about 18th-century Jesuit priests working in South America among the indigenous Guarani people. Father Gabriel (Jeremy Irons) has created a faith community in the jungles above Iguazu Falls, but it’s under threat from Spanish and Portuguese colonists, who use the Guarani as slave labor and want to eradicate their sanctuary. An emissary from Rome, Altamirano (Ray McAnally), is sent to keep peace and to determine the mission’s future.

There are parallels to the crucifixion narrative in the film. Though Altamirano represents the Church, his role in the plot is similar to that of Pilate. Father Gabriel is a Christ figure, while newly converted Jesuit Mendoza (Robert De Niro), a former slave trader, is a conflicted apostle. Mendoza’s desire to take up arms to defend his newfound community, juxtaposed with Father Gabriel’s certainty that love is the only acceptable response, also strikes a familiar chord. The tragedy and Christlike sacrifice of the film’s climax, in which the colonists, the Guarani, and the Jesuits’ conflict finally boils over into violent confrontation, drives those feelings home even further.

Rogue One: A Star Wars Story

Rogue One feels like the Star Wars series’ very own Good Friday story. This prequel to the first film, A New Hope, follows the group of rebels responsible for capturing the plans for the Death Star, thus setting in motion the events of the original Star Wars trilogy. The central group of characters are each in need of redemption, either as morally compromised “good guys,” jaded loners, Galactic Empire defectors, or embittered former soldiers.

The fact that none of the characters appear in any of the subsequent Star Wars films tips us off that things don’t end well for the heroes of Rogue One. The film’s emotional arc is based in the audience’s knowledge that although the characters don’t live to see the results of their work, hope is ultimately on the horizon. Rogue One lives securely in the space between darkness and light, a story of redemptive sacrifice that ends with a pregnant pause.

The Last Temptation of Christ

The Last Temptation of Christ feels like a no-brainer in the sense that it’s literally about Christ’s ministry and crucifixion. It also lives fully in the kind of vulnerability Christ displays in the Garden of Gethsemane—a controversial choice, but one that feels personal to director Martin Scorsese and screenwriter Paul Schrader. Through their adaptation of Nikos Kazantzakis’ novel, Scorsese and Schrader explore the paradoxical dual nature of Christ—fully human, fully God—which his death on Good Friday brings into sharp focus.

The film’s story goes in some radically different directions than the biblical narrative. Yet as Roger Ebert wrote at the time of its 1988 release, “Certainly useful things can be said about Jesus Christ by presenting him in a non-orthodox way.” By introducing doubt into the crucifixion story, The Last Temptation of Christ makes Jesus’ sacrifice all the more powerful, framing it as an intentional decision, not just an inevitability.

It could be argued that the entire Lord of the Rings trilogy is appropriate Holy Week viewing. At various times throughout the saga, the films reflect the emotions present throughout the week, even echoing the eventual resolution in the resurrection—and, later, ascension—of Christ. More specifically, the end of The Fellowship of the Ring brings together the themes of sacrifice and uncertainty that define Good Friday.

The Fellowship of the Ring centers on a group of characters sent forth on a shared quest to help one of their members complete a task that will save their realm from destruction. They’re from different places, of different backgrounds and motivations. Thematically, the Fellowship isn’t dissimilar from the apostles. In some ways, the emotional struggle, temptation, and guilt of one of them, Boromir (Sean Bean), particularly echoes the story of Judas.

The end of the film places our heroes in difficult territory, with the Fellowship dispersed, confused, and disillusioned—again, not unlike the apostles after Christ’s crucifixion. Like the story of Good Friday, we also know that this isn’t the end of the road. Even in the midst of despair, we await The Return of the King.

Terrence Malick’s film about WWII Austrian martyr Franz Jägerstätter is a response to the frustrating politics and systemic injustice of life today. It’s also a deeply religious film that turns its main character into a Christ figure.

Jägerstätter is a devout farmer who lives a quiet life in a rural village with his family, until the Third Reich disrupts his peaceful existence. Jägerstätter struggles with how to respond as a Christian to the hate-filled politics around him. After he’s arrested for refusing to swear loyalty to Hitler, Malick frames his imprisonment (and eventual self-sacrifice) in Christ-like terms. At one point, a government official (Matthias Schoenaerts) visits Jägerstätter, imploring him to ignore his principles and take the easy way out. The sequence brings to mind both Pilate’s encounter with Christ and Satan’s temptation of him in the desert.

Jägerstätter is killed before the end of the war, with the future of the world still undetermined. History tells us that there’s hope, and that the principles Jägerstätter died for were righteous. Good Friday asks us to sit with Christ in his pain and sacrifice, and to consider what we ourselves would sacrifice in the name of faith. A Hidden Life lives in those same questions, and comes to a similar conclusion. When asked to consider what we should be willing to sacrifice for our beliefs, the movie’s response is that nothing less than our lives is enough.

Mighty Thor’s Walk to the Cross 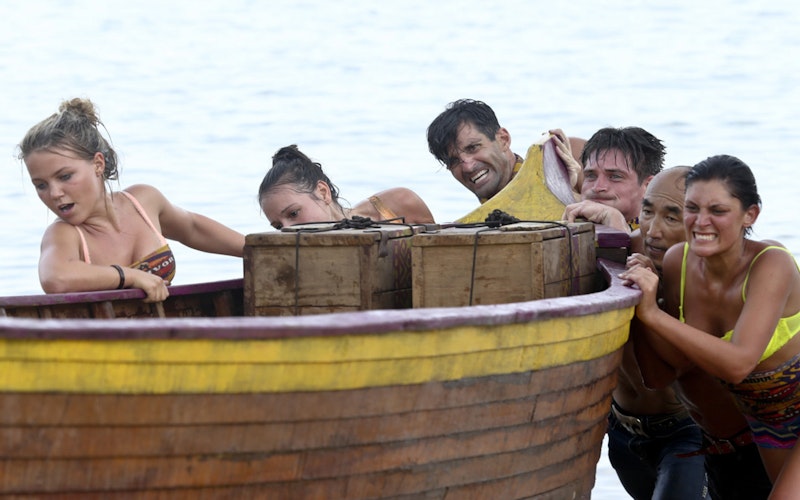