A new documentary — Flannery — reminds us how the Southern writer’s dark stories illuminate our need for God’s voracious love.

With political polarization expanding in breadth and depth amidst successive crises, a film focusing on a deeply Christian artist and visionary who also lived during a time of tumult provides a reminder that our current troubles aren’t new, but have a long history.

O’Connor—who lived from 1925 to 1964, dying of lupus at age 39—experienced "the best of times" and "the worst of times" in modern American history. Accordingly, one of the documentary’s strengths is placing O’Connor’s life and work squarely within the context of the mid-twentieth century crises that informed and defined her writing: the impact of World War II on Americans here at home, the rapidly changing roles for women, the challenge of the Civil Rights movement, and the growth of material prosperity along with an accompanying decline in spiritual richness.

Flannery rightly makes O’Connor’s theology of grace and her commitment to the life of the church central, yet portrays these subjects in broad strokes that likely reflect the views of its directors and backers. (A 2017 documentary, Uncommon Grace: The Life of Flannery O’Connor, focuses more closely on the specific theological commitments manifest in her “Christian realism.”) This film offers a “Flannery O’Connor for Everyone,” a fact displayed in a delightfully wide cast of participants whose own work has been influenced by O’Connor, including Conan O’Brien, Tommy Lee Jones, Alice Walker, Mary Karr, Richard Rodriguez, Tobias Wolff, Hilton Als, Sally Fitzgerald, Angela O’Donnell, Lucinda Williams, Ralph Wood, and Randy Boyagoda.

Such luminaries are indicative of the film’s high production quality. And indeed, Flannery serves up a feast for the ears and eyes, featuring original and traditional music on the soundtrack, archival film clips and photographs, and sumptuous camera shots of O’Connor’s rural home and personal possessions. The original animated segments that illustrate O’Connor’s best works are brilliant, capturing not only the dark comedy of the stories, but also paying tribute to O’Connor’s early work as a cartoonist and painter. At times, there is a disjointedness to the film’s narrative flow, which may prove challenging to viewers less familiar with O’Connor’s life and work. I imagine the documentary will be most interesting to those already acquainted with O’Connor. But the film’s excellent explorations of several of her best stories will, hopefully, encourage any viewers to read more of her writing.

Flannery places O’Connor’s life and work squarely within the context of the mid-twentieth century crises that informed and defined her writing.

Often described as a Southern gothic writer, O’Connor wrote novels and short stories characterized by the freakish and grotesque. But, as she made clear in letters, interviews, and lectures (many of which have also been published), such distortions were her way of reflecting society back on itself in hopes that we might recognize our own distortedness. For O’Connor, fiction—as she explains in an interview included in the film—“is a plunge into reality and it is a shock to the system.”

As a Christian, O’Connor understood that reality includes mysteries that lie beyond what the ear can hear and the eye can see. For her, ultimate reality is bound up in grace, a grace she knew she needed as much as any of her vilest, proudest characters (and there are many of these in the pages of her works).

Recent criticism has focused on the extent to which O’Connor should be seen as racist, despite the critique of racism in many of her works. That critique often depended on her ironic use of racist tropes and terms by her characters. But her personal correspondence reveals conflicted views about integration and Civil Rights activists. Created long before the current conversation on racial injustice, the documentary puts these issues front and center—as they should be, considering they were central in O’Connor’s world and in her works. Her stories show that racism was something she understood from the inside. “Recovering from . . . racism takes a long time,” one critic in the film points out. The timeliness of the documentary for this moment is captured by another critic’s observation toward the end that the things O’Connor wrote about “aren’t going away.”

O’Connor was, the film states, “one of the maybe five or six writers in the history of the world who is least afraid to look at the darkness.” But O’Connor’s real gift to her readers, both then and now, was to not merely point out the darkness in everyone else. Rather, O’Connor models what it means to recognize the darkness in ourselves. Her last short story, “Revelation,” demonstrates powerfully that recognizing that darkness can come only by grace. Here as in most of her works, such grace is sudden, violent, and unmerited. The main character, Mrs. Turpin—who prides herself on being better than everyone else around her—has to be literally hit on the head in order to see that in the kingdom of heaven, the last shall be first, and she will be last. The moment of grace is the revelation that apart from that grace, no one is good.

O’Connor signed one of the last letters she wrote, “Mrs. Turpin.” Her stories seem to have been grace-filled moments of revelation for herself as much as for her readers. As she says in the film, “The writer may be revealing a mystery to himself at the same time he is revealing it to everyone else.” 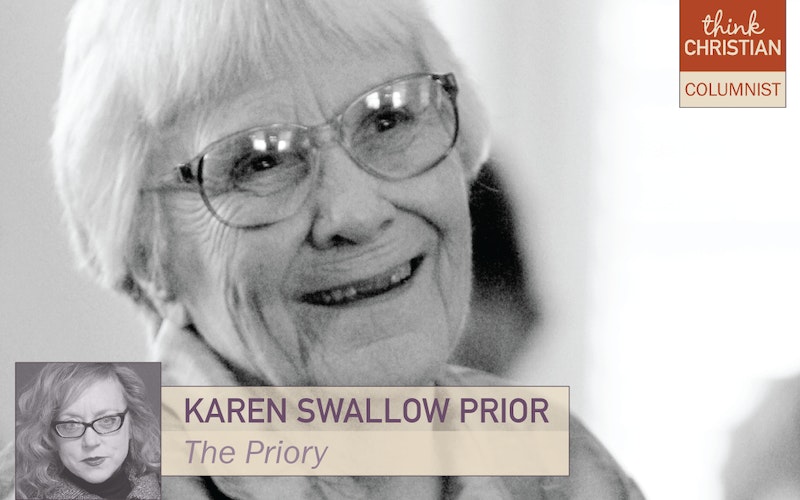 Harper Lee and the moral imagination