Come test the spirits of the Netflix series — if you dare.

An au pair looks into the mirror and sees fiery eyes peering back at her.

A guilty man finds his malevolent double staring at him with an accusing grin.

A worried housekeeper discovers inexplicable cracks in unusual places on the manor grounds.

Frightening images such as these define the Netflix series The Haunting of Bly Manor. Created by Mike Flanagan, Bly Manor loosely adapts a number of Henry James stories, particularly The Turn of the Screw. Victoria Pedretti plays Dani, an American in England hired by Henry Wingrave (Henry Thomas) to care for his nephew Miles (Benjamin Evan Ainsworth) and niece Flora (Amelie Bea Smith). Dani receives a warm welcome from her fellow staff members, including housekeeper Mrs. Grose (T’Nia Miller) and cook Owen (Rahul Kohli). But the appearance of phantoms reveals trouble on the idyllic estate.

As its title suggests, The Haunting of Bly Manor is a ghost story. Flanagan fills the frame with specters—bleached figures watching from the shadows. But the show takes more interest in portraying haunting as a form of memory, creating fear from manifestations of guilt or grief that the characters cannot forget.

For example, the figure with glowing eyes that follows Dani is her former fiancé, who died after she abruptly ended their engagement. Henry Wingrave’s double reminds him of betrayals that alienate him from the family (betrayals that are revealed in the series’ later episodes).

The show’s most interesting take on memory comes in the fifth episode, “The Altar of the Dead.” Throughout the episode, Mrs. Grose moves through various points in time. In one moment, she’s comforting Owen over the death of his mother in the series’ present. The next, she hears a gust of wind and finds herself inside Bly Manor, a year in the past. There she encounters Dani’s predecessor (Tahirah Sharif) and Henry’s valet (Oliver Jackson-Cohen), reliving a moment when she was unable to halt their self-destructive behavior. Confusion drives her to the front door, but the sound returns as she steps outside and she’s transported to an evening several months later, when she learned of her husband’s affair. Terror overwhelms Mrs. Grose as she stumbles across the garden, toward the camera. She stands in center frame and doubles over, wailing in agony.

Mrs. Grose is trapped, caught in a cycle of mistakes and missed opportunities. Memories of good times lost and words left unsaid haunt Mrs. Grose as vividly as any of the ghosts in Bly Manor.

Bly Manor portrays haunting as a form of memory.

For Mrs. Grose, Dani, and Henry, nothing is scarier than remembering what you lost and facing your wrongdoing. When Dani feels her fiance’s burning eyes upon her, she doesn’t recall the man he was or even her kindness and honesty. She feels only guilt. When Henry’s double mocks him, he doesn’t think about ways that he can repent for his mistake. He only hears failures, an experience he describes accurately when he says, “This is hell.”

Unlike these two, Mrs. Grose finds some comfort in the midst of her recollections. Her grief returns her to her first conversation with Owen, when she interviewed him for the cook position. While discussing his mother’s dementia, Owen paraphrases an observation from theologian and Trappist monk Thomas Merton. While he does acknowledge the difficulty of losing the person he knew, Owen also sees something beautiful in the change. “Once we get past consciousness, and identity, and all the things that occupy the front of our brains,” Owen explains, “you reach a transcendence, an infinitely abundant source, or what have you.”

In New Seeds of Contemplation, Merton identifies those things that occupy the front of our brains as a type of “false self,” an identity constructed by our guilt and our fears. This self becomes an obstacle to union with God, a “tenacious need to maintain our separate, external, egoistic will.” By separating us from God, this false self becomes monstrous, tainting all of the good things created by God and even replacing God as the object of worship. Merton writes that “to worship our false selves is to worship nothing.” He adds, “the worship of nothing is hell.”

That’s a frightening thought, one at the heart of the horror in Bly House. Dani, Henry, and Mrs. Grose shudder in fear because they cannot move past their false selves, whether they be the selves soiled by guilt or the selves burdened by loss.

Throughout the Bible, however, we’re taught that these barriers from God are not absolute. In language appropriate to a ghost story, 1 John 4 urges us to “test the spirits to see whether they are from God,” reminding us that the spirit of God “acknowledges that Jesus Christ has come in the flesh.” This coming in the flesh, the epistle explains, is itself an act of love. God sent Jesus “into the world that we might live through him,” as “an atoning sacrifice for our sins.” God’s incarnation in Christ removes the guilt and grief that haunts us. We’re no longer defined by our sins, nor is death the end of our existence.

The ghosts in The Haunting of Bly Manor look scary, but even more frightening is the idea that there is no love—only the punishment of guilt and grief. Through the example of Owen, however, the series imagines love as the antidote to fear. Owen demonstrates the teaching of Merton and 1 John 4: that we are to love ourselves and others in all our complexity and deny the specter of our false selves. That's a power greater than the most terrifying ghost. 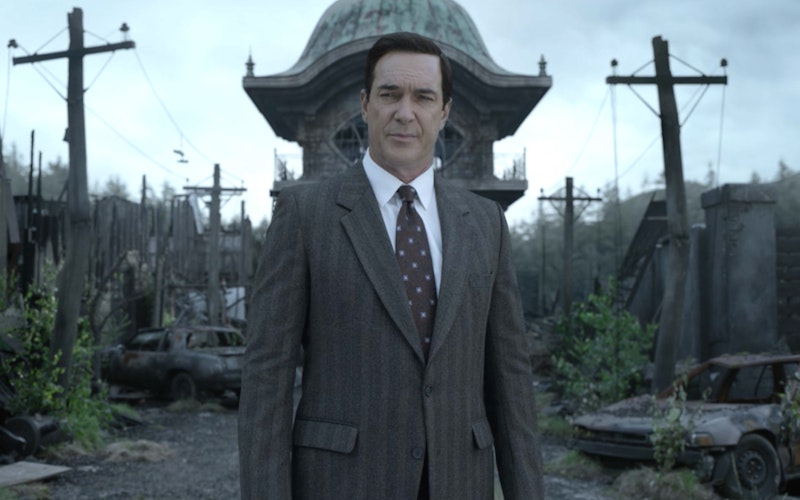