Mavis Staples, one of the most celebrated and important American artists of any genre, is enjoying the kind of late-season renaissance that her friend Johnny Cash perfected in the ’90s. Like Cash, Staples is one of very few artists who have earned the type of credibility allowing her to bring unabashedly Gospel-oriented material into both the soul and the Americana worlds with no apologies.

Staples’ latest album, One True Vine, is her second with Wilco’s Jeff Tweedy as producer and follows her 2010 Grammy Award-winning album, You Are Not Alone. On it she digs even deeper into what has become a trademark hybrid of blues, gospel and soul with songs that focus on encouragement, determination and hope.

Staples has been a part of the American pop firmament since her debut with her father’s band, The Staples Singers, in 1950. She was just 11. As part of the unofficial soundtrack to the Civil Rights movement, The Staples Singers brought positive, social-message songs and flagrantly Christian material onto the pop charts numerous times throughout the ’60s and ’70s. While their faith was a clear driver of their music, their commitment to speaking into the mainstream culture earned them the tag “message music” instead of being limited to the confines of the church.

There is something truly transcendent about One True Vine.

That same message-based commitment to cultural relevance has permeated all of Mavis Staples’ previous solo outings, including two records recorded for Prince’s Paisley Park label and produced by Prince over 20 years ago. After lengthy breaks, Staples began to re-appear as a contributing artist or guest vocalist on a series of special tribute projects, but her recent victory lap started in earnest with her 2004 release, Have A Little Faith, and continued through the last decade with sets produced by Ry Cooder and Tweedy. Now in her 70s, Staples’ voice possesses the same well-worn comfort of a vintage guitar and her sense of self is irresistible. But as fun as the last several records have been, there is something truly transcendent about One True Vine.

This record first came into my ears, mind and heart during a very challenging time of tragedy and pain for me and my family. It was time to review One True Vine, so I cued it up in a hotel room and heard Staples’ leathery, tear-soaked voice sing a slow-burning, low-key confession of doubt, hurt and resolution on the record’s opening cut, “Holy Ghost.” This was no flag-waving, rousing bit of chest-pumping bravado. Instead it plays like a page from the journal of someone traveling through a shadowed valley. “Some Holy Ghost keeps me hanging on,” she moans. There are times we feel so wounded and so weak that we expect to be left alone in the dark forever. But in those times - maybe especially in those times - the Holy Spirit, who has always been with us, becomes more visceral than ever.

To say this song caught me off guard is an understatement. Like she has been doing for over 60 years, Mavis Staples earned the right to speak into my pain and confusion for the next hour or so. I’m so glad she did.

What follows throughout the balance of the disc ranges from upbeat romps and shuffling Staples Singers-style pop to flat-out worship songs, all recorded with rich analog warmth and plenty of ambient resonance. Throughout Staples instructs, encourages and points resolutely to a light shining in the distance, a light she’s not ashamed to name “Jesus.” That inspires me to no end.

When the Staples Singers addressed Civil Rights struggles, poverty, war and other issues of the day, it was always through the lens of faith and as an effort to take Jesus seriously. When Mavis Staples speaks to her own frailty and our collective human condition, she continues that legacy. One True Vine is a powerful reminder that authenticity and integrity win.

“JJT” has been chasing the thread dangling between eternal truths and temporal creative experiences for nearly three decades. He is a writer, a businessman, a father, an artist and a seeker. Read more about him at JohnJThompson.com. / Photo courtesy of mavisstaples.com, with illustration by Jerod Clark. 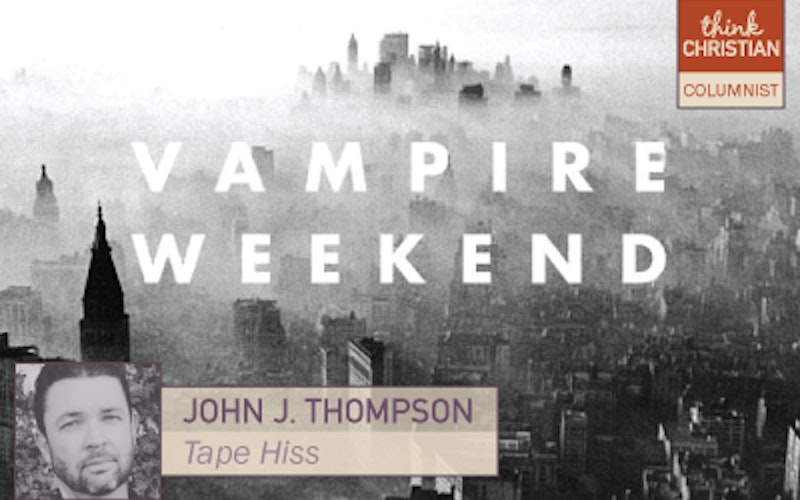 Vampire Weekend: Can the undead have spiritual journeys?