At first blush, Stephenie Meyer’s gender-swapping, 10th-anniversary edition of Twilight - calledLife and Death: Twilight Reimagined - is the dumbest idea of all time. High-school girl Bella is now high-school boy Beau and vampire Edward is now vampiress Edythe. A friend who is reading Life and Death would add that even at second, third and fourth blush, it’s a dumb idea.

After all, characters are who they are. When they wander into a writer’s mind and start unraveling their lives and unveiling their selves, it’s the writers job to write them as they unfold, as they face conflict, as they grow, fight, triumph or fail, as they settle into the future. A writer’s job is not to change all that the character reveals.

And yet, when I read the reason for the gender swap (aside from the opportunity to sell a bazillion more books, of course), I can’t help but nod in admiration. Because while gender-flipping is unwise from a literary perspective, it may very well serve sociological purposes.

According to Entertainment Weekly, Meyer “decided to go with the gender bending to underscore her position that Bella isn’t a ‘damsel in distress’ as certain critics have charged. Rather, the author insists, the character is a ‘human in distress’… Meyer also takes issue with the criticism that Bella was ‘too consumed with her love interest, as if that’s somehow just a girl thing.’”

And at this, I concede: the woman’s got a point.

Meyer’s “reimagined” Twilight may be ridiculous. But her idea is right on.

Because aside from the quality of the writing, one of the biggest critiques of the Twilight series was that Bella was too passive, too weak, too willing to trade her entire essence - her humanity - for a boy. And I get that. These are not characteristics I like to see in young women. But they aren’t characteristics I like to see in young men either. And we do see them in young men. Not only in literature or movies, but in real life.

So Meyer’s contention that we were too critical of Bella because she is a girl - and therefore her distress is deemed as so much worse than male distress - is spot on. It’s the flip side, really, of perennial gender and leadership issues. Leading women and girls are seen as bossy, unlikeable, unattractive. Leading men and boys are seen as, well, leaders - powerful, likeable, attractive.

As Christians, seeing - or valuing - people based on their gender should trouble us greatly. Because it’s just not the way of Jesus.

When Mary of Bethany and the woman at the well displayed gifts of intellect and curiosity - the same gifts the disciples sometimes show - the women’s gifts were seen by the disciples, the townspeople and one busy sister as pesky and scandalous - as bad things, because of their gender. Jesus saw the gifts for what they were, as worthy (even “better”) offerings.

Meyer’s “reimagined” Twilight may be ridiculous. But her idea is right on. Yes, gender does matter; it is part of who we are - who God made us to be. But when gender turns a common human condition into an eye-rolling “weakness” or a good gift into a bad one, we’re doing something very wrong.

Why I still haven't read Fifty Shades of Grey

‘Twilight’ and the agony of abstinence 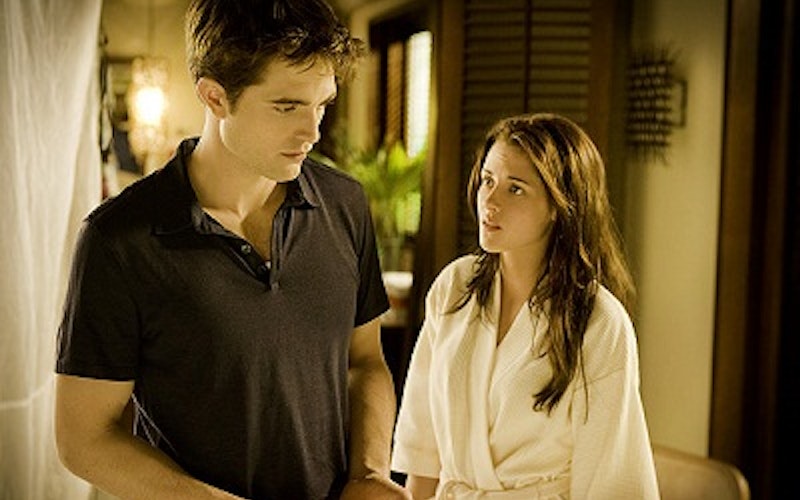