When we’ve seen the worst — in society, in others, in ourselves, in Joker — how are we called to respond?

While dining out one night, I learned that my check had been anonymously paid for by someone else. The only clue to their identity was a hand-written message on the back of my receipt: “Jesus Bless You. Romans 12:1-2.” That second verse reads, “Do not conform to the pattern of this world, but be transformed by the renewing of your mind.” Romans 12 reflects on the crossroads we each encounter at some point, a choice of how to approach this world: conform or transform? Joker explores what it means to botch that choice.

In Joker, Gotham City stinks, in every sense. Saddled with a garbage strike and plagued by “super rats,” Gothamites fall prey to frequent crime and violence, much of it committed by the city’s dejected poor. Among those downtrodden citizens is Arthur Fleck (Joaquin Phoenix), who is struggling financially, socially, and spiritually. We see him battling apathy (“I don’t believe in anything,” he says about his politics), envy over the fortunes of others, and a persistent malaise that belies his job as a clown for hire. Painfully awkward, Arthur suffers from isolation, is constantly at odds with his environment, and causes discomfort in nearly everyone he encounters. His life shows us that this world can be cruel and hostile to its inhabitants, especially to those who don’t seem to fit. (Spoilers ahead.)

Nevertheless, Arthur is a dreamer. He dreams of stardom as a stand-up comedian, despite shaky confidence and even shakier talent. He dreams of a spot on Live With Murray Franklin and winning the adoration of its host (Robert De Niro). He dreams of a romance with his neighbor (Zazie Beetz). Romans 12 encourages us to dream, to put our gifts to work, whether it’s in preaching, teaching, service, giving, or leadership. Or, in Arthur’s case, bringing “joy and laughter into the world.” Do it well, do it cheerfully. Yet it soon becomes clear, as Arthur laughs and dances his way into infamy, that his zeal is distinct from the kind Romans calls us to hold.

“Never be lacking in zeal, but keep your spiritual fervor, serving the Lord,” Paul instructs in that passage. Arthur’s evolution into Joker is anything but godly. His moment at the crossroads—his chance to either conform or transform—comes one night while riding the subway, where a female passenger (Mick Szal) endures harassment from a drunken trio of men (Carl Lundstedt, Michael Benz, Ben Warheit). Arthur initially looks away from the scene, but when their attention turns to him and things escalate physically, he responds with violence.

This sets into motion changes in both Arthur and the world around him. By the end, he stands tall in the fiery ruins of Gotham, surrounded by acolytes donning clown masks and tearing the city apart. Once he goes full Joker, he’s a different man than we see in the beginning—commanding and quippy, dancing with more zeal than ever. While Arthur has seemingly transformed, he hasn’t renewed his mind on behalf of God’s “good, pleasing, and perfect will.” Rather, in willingly serving as a symbol for Gotham’s collective rage—by marveling at that rage, by fueling and being fueled by it—he’s actually chosen to conform to this world after all.

Arthur’s evolution into Joker is anything but godly.

So what does it mean to actually transform? Continuing with Romans 12, we see where Arthur (and many of us) go wrong. We’re told, “Do not repay anyone evil for evil” and to “live at peace with everyone.” We’re discouraged from seeking vengeance on those who’ve wronged us; that’s God’s job. Instead, “cling to what is good” and “be devoted to one another in love.” Rather than merely lashing out at the source of our pain, we’re told to devote our energy toward relieving the pain of others: “Share with the Lord’s people who are in need.” The message of transformation in Romans 12 calls us to bridge humanity’s divisions: between the haves and have-nots, the oppressors and the oppressed, the seen and unseen, those who inflict trauma and those who survive it. To transform is to transcend that which keeps us apart.

Yes, these divisions are real and pervasive and inflict harm on people’s lives. Joker is clear about that. But perhaps it’s possible to both address that harm and work toward a world where divisions are less likely to grow, a world freer from resentment and the lure of retribution. “Rejoice with those who rejoice; mourn with those who mourn. Live in harmony with one another,” Romans 12 also instructs. Choose empathy, choose the way of Christ, and transform yourself for the sake of all.

Empathy can be hard to muster in a world that devalues human life. We see examples throughout Joker that reflect our own zeitgeist, in which the lives of the least are considered disposable; the mentally ill are controlled or ignored, but never helped; the wealthy are demonized and the poor are dismissed, at the cost of lives on both sides; and no one is seemingly safe from the cannibalism of entertainment, which feeds on the public’s shame, fear, folly, and discontent. At my showing of Joker, the audience laughed at a tense scene in which a little person (Leigh Gill) nearly loses his life because of his height. This after the theater checked our bags for weapons and an usher warned us about the threat of terrorist violence, all ahead of a trailer for Jumanji: The Next Level. Facing all this, it’s easy to reach the crossroads, give in, and respond to the vileness and banality of this world in kind.

Some, like Arthur Fleck, do just that. But others can and do take another path. Through God’s grace, we are constantly invited back to the crossroads and given chance after chance to choose to be transformed. The key is to keep our eyes open and to see beyond this world enough to accept that invitation. It may be difficult and we may stumble along the way, but as Frank Sinatra sings at the close of Joker, “Each time I find myself flat on my face. I pick myself up and get back in the race.” The question is: What kind of race do we want to run? 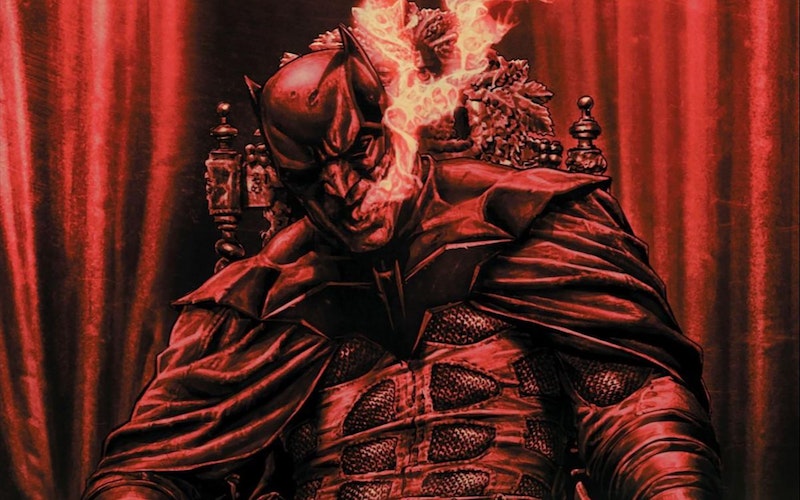 The Original Sin of Batman: Damned