By imagining portions of Christ's time in the wilderness, Last Days in the Desert gives us a more personal Jesus.

Christianity could be described as a religion of action rather than one of words or ideas. In the beginning was the Word, yes, but the Word became flesh and dwelled among us. Last Days in the Desert makes the brazen suggestion that this emphasis on action is something of which even Jesus needed to be reminded.

A dramatization of Christ’s trial in the wilderness, the movie imagines that Jesus, here called Yeshua and played by Ewan McGregor, encounters an isolated family. Headed up by a stern father (Ciarán Hinds), the family also includes a dying mother (Ayelet Zurer) and a teen son (Tye Sheridan) who is eager to leave the desert for Jerusalem.

At one point in the film, Yeshua attempts to soothe the mother with comforting phrases, but he fails to truly meet her suffering. With a grimace he mumbles to himself: “Action over words … otherwise, silence.” A minimalist movie, Last Days in the Desert itself follows this piece of advice. The film opens with long, mostly silent scenes of Yeshua stumbling across an unforgiving, almost alien landscape. The sparse sound of strings occasionally graces the soundtrack, then fades away as if it was traveling by wind over the endless hills. Written and directed by Rodrigo García, with cinematography by Emmanuel Lubezki (The Tree of Life, The Revenant), Last Days in the Desert creates a milieu that is at once otherworldly (Yeshua encounters a hermit woman with a demonic tail) and earthy (he also considers the decomposing corpse of a coyote).

Indeed, there is little in the way of talking or plot until he encounters the family, who are notably absent from the Biblical account. In Last Days in the Desert, these three become a microcosm for humanity, especially when Satan (also played by McGregor) uses them as pawns. At one point he taunts Yeshua that the Father fails to meet the family’s needs because “he’s so busy with little things … the shape of a drop of dew.”

There is something deeply Biblical about the gestures on which the movie decides to focus.

It’s telling that this Satan, given a smug gleam by McGregor, mostly deals in words — false words at that. There is a wonderful detail as Yeshua and Satan sit by a fire and the latter instinctively opens his mouth in awe at the sight of a falling star. Accused later of appreciating God’s creation, he unconvincingly scoffs, “I’ve seen every shooting star since the first one.” His denial only makes his earlier wonder more wonderful.

Satan’s claims ring hollow in the film, especially in comparison to the acts of faith and obedience we witness. While off collecting water with Yeshua, the son complains about being stuck in the desert, even as he insists that his will to leave does not mean he doesn’t love his parents. Dropping his heavy buckets, he races up and down the surrounding hills, his cloak trailing in the wind behind him like the tail of a free bird, yelling, “I’m not a bad son!” Then, as if to prove his claim, he quiets, hoists the buckets and resumes the path home.

Yeshua also becomes a man of action. There is something deeply Biblical about the gestures on which Last Days in the Desert decides to focus. Yeshua offers a kiss on a dying person’s mouth. He washes a pair of aching, filthy feet. He helps to dress the dead. And, in an epilogue, he takes up his cross.

I wish the movie hadn’t included that last image, to be honest. Until that point, Last Days in the Desert had largely avoided the Bible storybook approach that has undone so many cinematic depictions of Jesus’ life (I think particularly of Martin Scorsese’s The Last Temptation of Christ). The more “official” the scenes in such films, the more distant their depictions of Jesus tend to be. By untethering itself from the specifics of the Biblical account, Last Days in the Desert has, ironically, given us a much more personal Jesus. Indeed, this Yeshua counts as one of the most fully realized depictions of Christ — of the Word made flesh — I’ve seen onscreen. 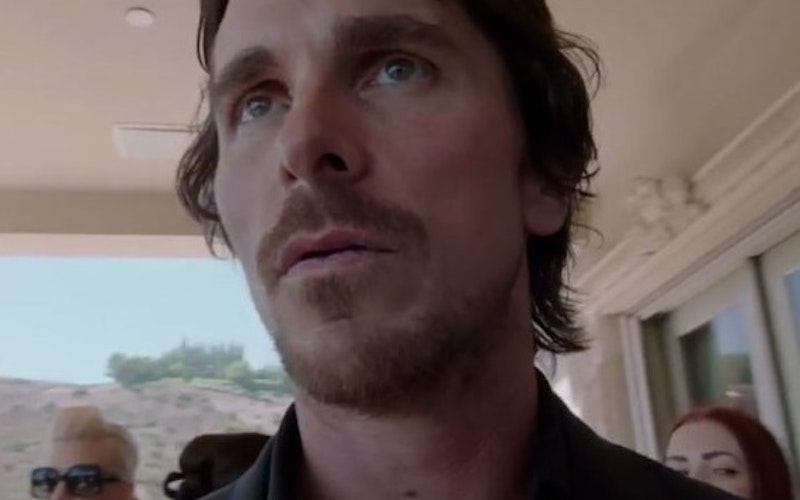 The digital damnation of Terrence Malick’s Knight of Cups