Like the Proverbs 31 woman, Midge Maisel has the boldness to laugh at the days to come.

Midge Maisel waits for her husband to doze off, rushes to the bathroom, and hastily cleans off her makeup. She slinks into bed only to wake up in the early morning hours, return to the bathroom, reapply her makeup, and sneak back into bed. When he wakes up, her husband sees her perfectly applied face, which mirrors her perfectly applied life. Midge Maisel is a young housewife living in New York’s Upper West side. She married her husband, Joel, right out of college, had two children, and is the typical privileged homemaker of the 1950s. The unraveling of her perfect little world is the basis of Amazon’s Golden Globe-winning series, The Marvelous Mrs. Maisel.

Midge (Rachel Brosnahan) starts the series as a supportive wife who wants to please her husband. Even though Joel (Michael Zegen) works in advertising, Midge still wants to help him fulfill his dream of being a comedian. Every night her suit-wearing husband puts on his black turtleneck and pretends to belong with the beatniks and local artists. They take a taxi to the Gaslight Cafe in Greenwich Village, where Joel counts on Midge bribing the owner with homemade brisket to secure Joel’s spot in the show lineup.

The facade falls, however, when Midge finds out that Joel is stealing his material from Bob Newhart. After tanking onstage one night, he storms out on Midge, telling her he’s having an affair with his secretary. If “hell hath no fury like a woman scorned,” then Midge channels her fury through comedy. Returning to the Gaslight Cafe in a drunk and disheveled state, she lets it all out onstage. The owner notices Midge’s comedic potential, offers to be her manager, and helps her launch a comedy career. The wife of the aspiring comedian was the true hidden talent all along.

Midge’s parents don’t take the news of Joel’s abandonment well. They blame their daughter and are anxious about her future. But Midge doesn’t seem worried. Instead of wallowing in self-pity or staying stuck in bitterness, Midge gets a part-time job while pursuing her career. Her world has been shaken, but her trust and confidence have not. She uses comedy as a path to personal reflection, and, like the Proverbs 31 woman, learns to “laugh at the days to come.”

Midge's world has been shaken, but her trust and confidence have not.

Midge is not what we might imagine as the Proverbs 31 woman. She’s crass and vulgar at times and leaves her children with her parents or a babysitter while she tries to figure out how to be a working, single mom. But like the Proverbs 31 woman, she is clothed with “strength and dignity.” Midge doesn’t sit around and mope because of her difficult circumstances, she does the next thing. She’s walking forward in boldness, while processing, reflecting, and expressing her grief. Though her father tells her to beg Joel to take her back, she keeps her dignity. She doesn’t put the blame on herself for her husband’s infidelity and abandonment. Instead, she embraces the reality she’s been given and looks straight ahead.

Midge is resolute, which reminds me of the way Christ approached his final days in Jerusalem. Jesus’ resoluteness was due to his confidence in his father’s providence. The Proverbs 31 woman was confident in God’s providence as well. Why could she “laugh at the days to come”? Because she trusted in her father’s loving care for her. She knew God had ordered all her days, and was aware of the number of hairs on her head.

We don’t have to put on a perfect face like Midge, because we are fully known and yet fully loved. We can boldly walk into our futures, just as we are, because Christ boldly walked forward to his crucifixion for us. Because of his sacrifice, we are fully accepted by the Father. Writing about The Marvelous Mrs. Maisel in The Atlantic, Sophie Gilbert says, “The closest Midge comes to emotional honesty is when she gazes at her face in the mirror, realizing she doesn’t have to apply makeup before bed anymore, and seems to feel a curious mingling of sadness, liberation, and relief.” When the facade fell away Midge could truly look at herself in her natural state. All her “flaws” were on display, yet she could laugh.

Liz Wann lives in Philadelphia with her husband and three children. She is the author of a book for weary moms, The End of Me: Finding Resurrection Life in the Daily Sacrifices of Motherhood. 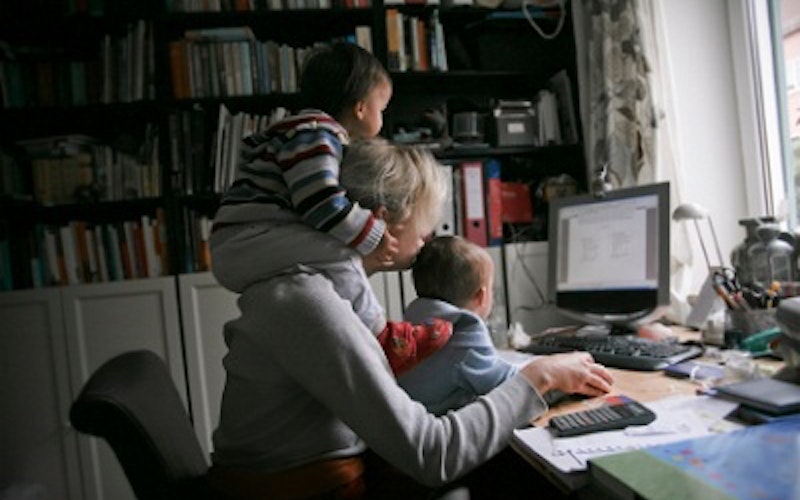 Modern parenthood and the myth of the Proverbs 31 woman