Season two of the FX series explores sin through its protagonist's delusions of heroism.

Note: This article contains spoilers for season two of Legion.

The FX series Legion is a superhero show only in the sense that it's based on comic book source material and (probably?) involves our (probable) heroes saving the world. Created by Noah Hawley (also showrunner for FX's Fargo), the series is based on X-Men mythology, though it's set in a parallel universe to the one(s) audiences experienced in the X-Men movies. But that’s where the superhero hallmarks end.

Legion has distinguished itself as a visual feast; nearly every frame of the show could hang in a surrealist gallery. As the best superhuman fare does, Legion also uses the super to explore the human. Season One was about identity and trauma. Season Two explores the first human lie: that we are Good, that we can play God, and how that lie creates evil in us and in our world.

Season One introduced us to David (Dan Stevens), a diagnosed schizophrenic patient in a mental hospital. But David is not schizophrenic, it turns out. Instead, he was the victim of a powerful psychic mutant named Amahl Farouk (David Negahban), also known as the Shadow King, who had taken up residence inside David. A powerful mutant in his own right, David drove the Shadow King from his body into the body of his friend, Oliver Bird (Jemaine Clement). Once freed of the Shadow King's presence, David was abducted by a mysterious sphere.

Season two opens as a shadowy, mutant-hunting government organization called Division 3 finds David after nearly a year of searching. During that time, Division 3 has made a truce with David’s allies at Summerland, a mutant safe haven and training facility. Their common goal is to stop Farouk from finding and reuniting with his physical body. David, we learn, was abducted by a one-armed version of his girlfriend Syd (Rachel Keller), who he met in the mental hospital, and who has other plans. Syd claims to be from the future, and begs David to help Farouk find his body to avert some coming disaster about which she reveals little.

Legion sets forth this relatively straightforward plot with typical surreal flourishes: a teeth-chattering epidemic tied to the only person who knows where Farouk's body was buried, a superpowered dance battle, and Jon Hamm narrating brief, illustrated excurses in psychology.

These digressions frame many of Legion's episodes and provide a backdrop for David's arc this season―an arc that bends toward villainy. Legion wrapped up season two by revealing David not to be the mutant messiah he was set up to be, but a villain who will end the world. In the process, Legion opens a space in which we can speaking meaningfully about sin at once personal, corporate and systemic.

In the first episode, Hamm traces the nature of delusion, illustrating how it is, at first, indistinguishable from any other idea. It is only once a delusion has 'hatched' and other more wholesome ideas have been rejected, that the delusion can blossom. His rumination echoes Jesus’ warning that the seeds of Sin are difficult to distinguish from the seeds of Justice. Jesus tells us that the Greatest Commandment is to love God and love our neighbors. Sin, on the other hand, insists I am supreme, that I am God, and the Other exists only to facilitate my ends. What greater delusion exists than this?

How can we avoid the path of villainy, especially when the seeds of sin are so difficult to discern?

David’s sin blooms at the season’s end, when we learn Future Syd has tricked David into saving the Shadow King so Farouk can stop David himself when he becomes evil in the future. David, it turns out, is the Ender of Worlds. David reveals himself to be under the power of Sin, this delusion that has consumed him. He takes obvious pleasure in torturing Oliver/Farouk for information on Syd’s whereabouts. In the season’s most controversial turn, after David rescues Syd, he essentially date-rapes her, though he refuses to acknowledge his actions as assault. For David, everyone, both his enemies and those he claims to love, have become means to accomplish whatever ends his mind conceives.

How could David, our lovable, pitiable protagonist, be evil?

Legion warned us: it all begins with a delusion. David's was simple (and terrifyingly relatable): "I'm a good person, and I deserve to be loved." David convinced himself that he is fundamentally good. He could blame any evil behavior on the Shadow King, who had possessed him. Because David is good and deserves to be loved, any actions he takes (even forcing someone else to be intimate with him), are not only justifiable, but morally praiseworthy.

How can we avoid the path of villainy, especially when the seeds of sin are so difficult to discern? The Church has long employed confession as a means to allow God to show us those seeds of sin (which, though they remain hidden to us are known to the one who knows and sees all). The Seven Deadly Sins were created as a guide to personal prayer and confession, the root sins from which all others grow. In addition to private prayer, James implores us to "confess your sins to one another, and pray for one another, so that you may be healed."

If we would avoid the path of villainy, it begins with admitting we're already villains. Like David, we've already bought into the mass delusion that has become the human condition: that we can be gods, and that others exist mainly for our good. It remains to be seen if David can be rescued from his delusion, if he can find the strength to do the hardest thing of all: admit he's evil.­­­ 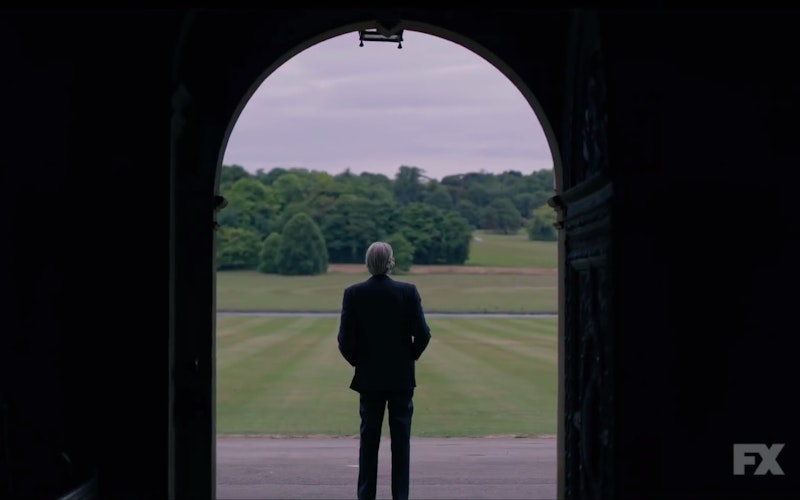 FX's Trust and the God of Mammon