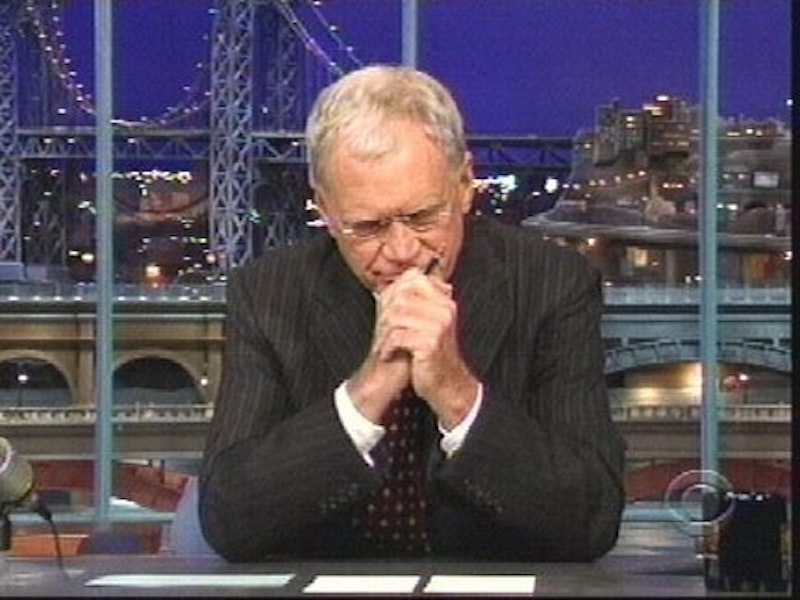 What to make of Letterman? I find myself conflicted.

On his Late Show program Thursday night, David Letterman relayed the true story of a blackmail attempt against  him for $2 Million, starting about three weeks ago. Letterman's response was both to have the extortioner arrested and, presumably to pull the teeth out of any future threats, to confess to his TV audience that he had indeed had sex with women who worked for him on his program. Letterman told the story in a fairly light-hearted way, but was clearly serious, shaken, and apologetic. He stated clearly that he wanted to protect those involved, from his family, to co-workers, to the women implicated.

The audience laughed at his jokes, sometimes uncomfortably, as Letterman grew more serious. In the end, they seemed proud and supportive of him for making such a public confession.

On the one hand, his public repentance was powerful, and I suspect, genuine. It seemed a mature and deeply decent thing to do. If only other public figures could have dealt with personal failures with such simplicity and honesty. If only pastors could be so transparent. If only I could admit my shortcomings and confess my sins so plainly.

On the other, the confession does not negate the consequences of sexual harassment. Letterman made light of anyone finding him sexually attractive, and implied that having sex isn't really that big of a deal. Regardless, he used his position of power to elicit sexual favors from direct subordinates. This is about abuse of power as much as it is about adultery. Granted, Letterman is an entertainer and not a civil official, so the stakes of public trust are different. Still, the abuse of power should call into sharp question his suitability to keep that position of power. I would have been more impressed if Letterman had also at least offered his resignation.

So I applaud Letterman for his bravery, but I'm not sure he's done yet.

What do you think? Should Letterman be quickly forgiven? Should he be fired? What should restoration look like?