For the series’ Christian character, a Job-like trial plants seeds of doubt.

A recent Grey’s Anatomy episode, written by Zoanne Clack and entitled “Personal Jesus,” put one of the show’s main characters through a trial akin to that of Job.

Indeed, the episode opens with April—a born-again Christian doctor played by real-life Christian Sarah Drew—recounting the story of Job via voiceover while we see her in the shower:

“In the course of one day, Job received four messages, each with separate news that his livestock, servants, and 10 children had all died. He continued to be a faithful servant. He still praised God. He persevered. Job’s faith was tested and he passed the test. And for his faith, God rewarded Job with twice what he had before.”

As the voiceover continues we see April working on a patient in the ER, one of three she will treat that day. By the end of the episode—spoilers ahead, in case you’re still catching up—all three patients die.

One of the patients April loses is a 12-year-old African-American boy shot by police while climbing into the window of his own home. April and the other doctors are deeply shaken by this, and discuss how it is representative of implicit racial bias in the justice system. When asked to give a statement about the shooting, April responds with rage at the injustice of the situation: “My statement is that a little boy was at home when your fellow officer shot and killed him. ...How am I supposed to have any faith in a system like that?”

You get the impression April is staring at the place where she last saw God, daring him to explain himself.

The other death April witnesses is more personal: that of her ex-boyfriend’s wife, Karin (Collette Wolfe), who is rushed into the ER with complications from her pregnancy. Matthew (Justin Bruening), her former boyfriend, is still hurt from April’s decision years earlier to leave him at the altar for another man, with whom she had had a sexual relationship. But he tells April that he doesn’t know what he would do without Karin, and April says that she is grateful he has found her. Karin’s death, after the emergency birth of her baby, compounds April’s sense of injustice. Her voiceover returns, this time referencing Jesus’ final words:

“‘Eloi Eloi, lema sabachthani?’ That’s what Jesus said on the cross before he died. ‘My God, my God, why have you forsaken me?’ Job asked the question, too, but he kept the faith. And what did he get for it?”

The camera lingers on Matthew holding his now-motherless baby, and the bitterness in April’s voice reaches a crescendo as she answers her own question.

“Was it worth it to have been a faithful servant? Or would it have been better to just curse his name at the beginning? Where was God through all of Job’s suffering and pain? He was winning a bet with Satan.”

Later we see April drinking at a bar, where a man comes up beside her, implicitly offering cheap sex. Her voiceover returns as the camera once again shows her in the shower: “Makes you wonder where he is through all the unfairness and inequity and cruelty in the world.”

In this scene April is stripped of clothes and makeup, leaving nothing between her and the disillusionment that takes over. The fact that there is a man in the shower with her seems almost incidental. April barely looks at him, staring straight ahead while her voiceover continues. You get the impression she is staring at the place where she last saw God, daring him to explain himself. Then she looks straight into the camera, breaking the fourth wall, as if to ask of us watching: “Where is he now?” It’s an echo of her question to the police officer: “How am I supposed to have any faith in a system like that?”

The episode leaves April’s questions unanswered, but I’m intrigued to see how the show will handle her crisis of faith. Grey’s Anatomy has been very sympathetic to April’s character and the place of religion in her life. My guess is that they won’t allow her to remain away from God. As with our own crises in real life, this may become an opportunity for April’s faith to grow and deepen. Remember that it is not after Job’s fortunes are restored, but in the depth of his sorrow, that he speaks some of the most beautiful words in the Bible:

“I know that my redeemer lives,
and that in the end he will stand on the earth.
And after my skin has been destroyed,
yet in my flesh I will see God.”

Jessica Kantrowitz has a Master of Divinity degree from Gordon-Conwell Theological Seminary, and has worked in youth ministry, international student ministry, and missions. You can follow her blog, Ten Thousand Places, and find her on Twitter @jfkantrowitz. 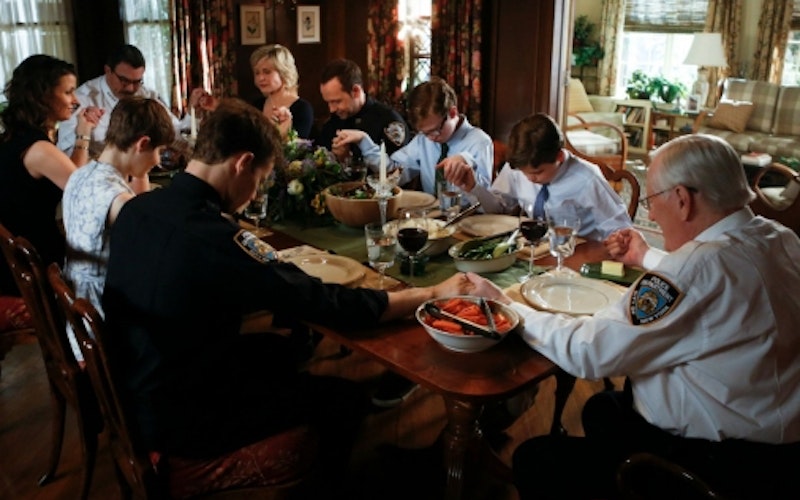 Blue Bloods and the Spirit of the Law