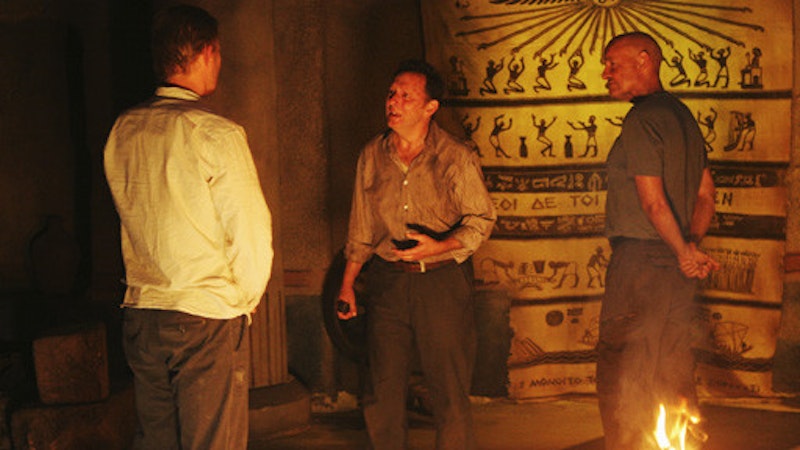 Is it safe to talk about “Lost” yet?

The cult television series had its season finale a few weeks back, so hopefully this post won’t ruin anything for anyone. If it’s still waiting on your DVR, a familiar word of warning: spoilers ahead.

The episode, entitled “The Incident,” opened with a scene that appeared to offer a God’s-eye view of the mysterious island at the center of the series. Viewers first came upon the island as its main characters did – when their plane crashed, leaving them stranded – but this opening suggested that the island has been overseen for centuries by two opposing figures.

In the first scene, the pair meets on the beach for a shrouded conversation. It isn’t long before you suspect one of the men represents God while the other represents Satan.

The two are regarding what appears to be a 15th-century ship off the coast and debate what might happen if the explorers found the island. Jacob believes good would come of it, while the man in black predicts they will “fight, destroy and corrupt.” Their conversation hinges, in other words, on nothing less than the redemptive potential of man.

There are allusions later in the episode that position Jacob not only as God, but as Jesus Christ. A character is asked, “What lies in the shadow the statue?” referring to the figure underneath which Jacob lives. The answer is given in Latin on the show, but it translates roughly to “He who will save us all.”

Intriguing, yet I’m not all that interested in what this means for “Lost” – especially considering that the way this show goes, next season’s opener could reveal that Jacob is, in fact, Satan. Or the pair are actually aliens.

What the finale made me think about, though, was the storytelling technique of employing an obvious God figure. What does that bring to a TV show, a movie or any other form of narrative?

Certainly the inclusion of such a character makes a Christian’s ears perk up, yet I think such figures say less about God than they do about the storytellers who have envisioned him (or, in some cases, her).

As the Book of Revelation reminds us, God is bigger than anything our puny minds can imagine, even in a wildly inventive television series such as “Lost.” Such visions may express a small facet of God’s reality, but in the end no human construct can contain him.

That said, did the “Lost” finale portray a recognizable God to you? Any predictions on where the producers might take this religious angle in next year’s final season?