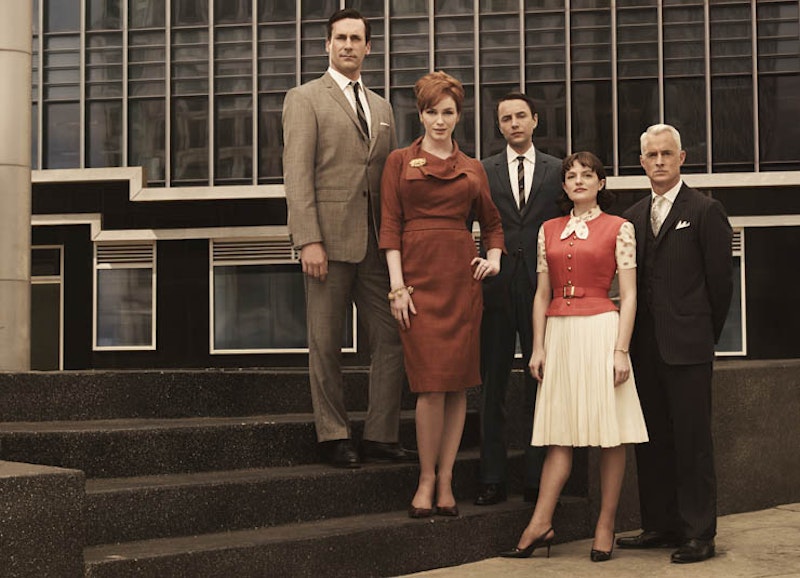 I’m behind on “Mad Men,” the AMC cable series about 1960s advertising executives and the women in their lives. Though the third season premieres Sunday, Aug. 16, I’m still in the midst of season two on DVD. All of which means this post on an intriguing year-two plot development shouldn’t be giving anything away.

The strength of the series lies in its women, from potentially unhinged housewife Betty Draper (January Jones) to secretary-turned-copywriter Peggy Olson (Elisabeth Moss). In season two, Peggy, a reluctant Catholic, finds that breaking out of the secretarial pool hasn’t necessarily meant an escape from male chauvinism. If anything, she’s only ventured further into the lion’s den.

Still, Peggy’s talented and she loves the work, so she’s forced to make compromises. One of the series’ definitive scenes takes place when Peggy butts her way into a boys’ night out with her male coworkers and some of their clients. Her intent was to prove she’s one of the boys, but instead she finds herself sitting on one of the clients’ laps at a strip club, a painful grin on her face.

All of this is juxtaposed with Peggy’s teetering faith, a remnant of her youth that’s becoming increasingly irrelevant as she climbs further up the corporate ladder. A young priest (Colin Hanks) recognizes her distress and tries to counsel her, but – at least to the point I’ve been watching – she deflects his offered friendship with guarded politeness.

The priest does convince her to take on some pro bono work – posters for socials, etc. – for the church. These efforts are picked apart by little old ladies who have no understanding of advertising. So where do Peggy’s talents fit? With the under-appreciating church, or the exploitative men on Madison Avenue?

It seems that this dilemma could stand in for similar ones many Christian professionals face, at least those who aren’t pastors, music leaders or others directly employed by a religious institution. Where is the “proper” place for, say, a doctor to use her God-given talents? How can an accountant most honorably practice his trade? If you can’t preach, how do you glorify God each day?

In other words, not everyone can work for a church, Christian school or other ordained ministry. Yet at what point is working for a secular one a misuse of the talents God gave you?

I’m curious to hear from those of you on both sides of the equation. What have your experiences been?