A wooden crucifix features prominently in Guillermo del Toro’s Pinocchio, Netflix’s stop-motion take on the 1883 children’s story by Carlo Collodi. But how much of Christ is in the movie?

It’s a question we could ask of other Pinocchios as well—from Disney’s traditionally animated 1940 classic to the studio’s recent remake, starring Tom Hanks as Geppetto. Jesus dramatically demonstrated on the cross that it is by his grace we have been saved, not by works of our own. Is there a place for that message in a notoriously works-based fairy tale, in which a wooden puppet must earn the very right to exist?

At the start of Guillermo del Toro’s Pinocchio, Geppetto (voiced by David Bradley) has nearly finished carving a crucifix for the church in his village. That icon continues to be a motif throughout the movie (at one point Pinocchio bounces to the front of the church and playfully mimics Christ’s posture, unaware that he’s tiptoeing toward sacrilege). Mostly, though, the Catholic practices in this Pinocchio register as outdated superstition. Far more alive and active in the movie’s world are the “old spirits”—eyeballs that float through the forest—as well as the golden-eyed, turquoise-tinged Wood Sprite (Tilda Swinton) who serves as this version’s Blue Fairy. Unfurling voluminous wings that are studded with blinking eyes, the Wood Sprite may visually recall the six-winged creatures in the book of Revelation, but she also comes across as a mythical counter to Christian canon.

This is no surprise considering that del Toro, who co-wrote Pinocchio with Patrick McHale and co-directed it with Mark Gustafson, has long laced his movies with suspicion of religion. In del Toro’s films like Blade II, The Devil’s Backbone, and The Shape of Water, the supernatural exists outside of church—more often than not in the form of a vampire, a ghost, a sea creature, or in this case a sentient wooden puppet who must choose between immortality in wood or a fleeting life in the flesh. Guillermo del Toro’s Pinocchio registers mostly as an imaginatively morbid meditation on how to live in the face of inevitable death. Yet, as is often the case, the good news of God’s grace persists, even if it’s not being preached from a pulpit.

Before further considering del Toro’s Pinocchio, let’s first go back to 1940. Although the story’s emphasis on moral instruction can be traced to Collodi’s original tale (in which Pinocchio is described as “a heartless child without an ounce of common sense”), it was Disney’s version that cemented the idea that the title puppet must meet certain benchmarks in order to earn life. In the words of the 1940 Blue Fairy (Evelyn Venable): “Prove yourself brave, truthful, and unselfish, and someday you will be a real boy.”

Pinocchio tries, but fails, tries, and fails again—and when he lies about it, his missteps are measured by his elongating nose. At one point, after following a bunch of misbehaving boys to Pleasure Island, he even sprouts donkey ears and a tail as evidence of his moral failures. Eventually, Pinocchio proves his worth by saving Geppetto from the bowels of the whale Monstro, sacrificing himself in the process. The Blue Fairy’s words float over Pinocchio’s lifeless body, revive him, and transform him into a real boy. Even Jiminy Cricket gets a shiny gold medal for his efforts.

As satisfying as that ending is—especially for us rule followers—there is a quieter moment, back in the belly of the whale, that moves me more. Astonished to see Pinocchio wash up in the monster’s gullet, Geppetto (Christian Rub) expresses further shock when he plucks off the puppet’s hat and sees his donkey ears. “Pinocchio! What’s happened to you?” he exclaims. While Pinocchio fumbles a chagrined response, Geppetto undergoes a change of his own, transforming from a disappointed dad into something more like the father of the Prodigal Son: “Oh, never mind now. Old Geppetto has his little woodenhead. Nothing else matters.” Not even the fact that Pinocchio isn’t a real boy.

Disney’s version cemented the idea that Pinocchio must meet certain benchmarks in order to live.

There is a similar moment in 2022’s Pinocchio, director Robert Zemeckis’ uneven attempt to combine live-action and computer-generated animation in the telling of the tale. Though missing the hand-drawn intimacy of the original film and featuring an eyebrow-raising performance from Hanks as Geppetto, Zemeckis’ Pinocchio has commendable qualities, including a gracious twist on the original film’s ending.

This time, it is Geppetto who nearly dies during the escape from the sea monster. As he lies sprawled on the shore, however, a tear rolling down the puppet’s wooden face falls onto Geppetto and revives him. Reunited, Geppetto reassures Pinocchio of his unconditional love: “You will always be my real boy. There isn’t a single thing I would change about you. I am so very proud of you. And I love you very much.” In this version, written by Zemeckis and Chris Weitz, Pinocchio remains a puppet (although the film cheats a bit by subtly smoothing out the animation of Pinocchio’s legs as he walks with Geppetto out of the frame, suggesting he may turn into a real boy yet).

The full force of Geppetto’s love can also be felt in Guillermo del Toro’s Pinocchio. (Spoilers ahead.) As in Zemeckis’ movie (and unlike Collodi’s story), this version envisions Geppetto as a grieving father, distraught over the death of a young son. Here the boy is no mere memory; named Carlo, he features prominently in the movie’s prologue, set during World War I. Carlo is killed when a bomb is dropped on the church while he and Geppetto are installing the crucifix—the flash of the explosion briefly, beatifically illuminating the figure of Christ on the cross.

Years later, still bitterly angry over his loss, Geppetto chops down the memorial pine standing over Carlo’s grave and drunkenly carves Pinocchio from it. Given sentience by the Wood Sprite, the puppet is directed to, yes, “be good,” but also to “bring joy and company to that poor heartbroken man. Be his son. Fill his days with light so he’ll never be alone.”

This Pinocchio tries to do, but due to the usual mistakes and misunderstandings, he fails to live up to the standard set by Geppetto’s beloved Carlo. And yet, in the movie’s climactic scene—set on the requisite seashore after the requisite escape from the sea monster—Geppetto echoes the fatherly love we’ve traced through all of these films. Hugging the gangly, limp puppet tightly against his chest, Geppetto tells him, “I was trying to make you someone you were not. So don’t be Carlo, or anyone else. Be exactly who you are. I love you, exactly as you are.” And it’s through these words—as much as by the touch of the Wood Sprite, who has come on the scene—that Pinocchio is revived.

Attentive viewers will notice that one of Pinocchio’s forearms has snapped off during the melee with the sea monster. As Geppetto holds him on the shore, a wobbly stick dangling from one side, Pinocchio inadvertently mimics the crucifix in the church yet again. During the bombing in the movie’s prologue, it too suffered a damaged arm. This is a revealing visual rhyme, rendered with the tactile (perhaps even incarnational) specificity that stop-motion animation can provide. In the artistry of Geppetto the wood-carver we see an echo of the one who hung on a wooden cross.

There is a curious line in Emma Rose’s 2010 English translation of Collodi’s story, where Pinocchio—finally reunited with Geppetto—says, “You’ve already forgiven me, haven’t you? Oh, how good and kind you are, Father!” The good news of the gospel, heard in each of these movies, is that we can say the same—no matter how long our noses. 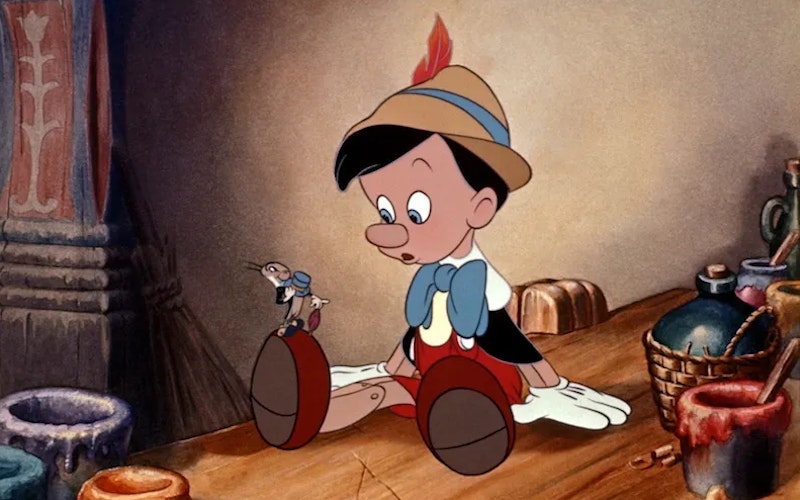 The Moral Power of ‘Pinocchio’