In the choose-your-own-adventure installment of Black Mirror, free will is just another part of the system.

For four seasons now, Black Mirror has subverted our reliance on technology to terrify us into watching another episode.

In a 2014 interview, show creator Charlie Brooker offered some clues as to what exactly his aim has been with these cautionary tales, saying that “a lot of the stories ... are about a lack of perceived control in today’s world.” Why the title? “When a screen is off, it looks like a black mirror; there is something cold and horrifying about that… I quite like the fact that people are watching it on (their TV or smart phone, so that) when the end credits start running and the screen turns to black, they see themselves reflected.”

Speculative fiction such as this, set in a near-modern world, is just far enough from our everyday that we tend to look at the stories and characters objectively. However, the most disturbing part of Black Mirror is that in viewing the interactions of the characters, you end up looking at yourself objectively. Brooker points out that “the villain is never technology.” In each episode, we see the truth of humanity enslaved, not by technology, but by themselves.

The latest offering from Brooker is intrinsically Black Mirror, but this time it literally involves the viewer in the story. Black Mirror: Bandersnatch, written by Booker and directed by David Slade, is a choose-your-own-adventure movie, in that you as the viewer make choices onscreen to influence the outcome of the main character’s storyline—from what cereal he eats to the music on the soundtrack to choices during life-or-death scenarios.

At first glance this would seem to be a fun experiment in creative media, but this is Black Mirror. Brooker won’t allow you to turn your mind off for an hour or two of entertainment. Rather, by putting us in this god-like position, he highlights the troublesome tension between fate and free will. Then he drives home this confrontation when the main character—a 1980s game designer named Stefan, played by Fionn Whitehead—begins to realize that something outside of himself is controlling his choices.

We too feel this lack of control in the limitations that the medium places on us. We can pause the movie, but we can’t go back or forward. When a choice is placed before us, we have 10 seconds to make a decision. We are only given two options in each decision that are direct results of our past choices. While the movie has five main endings (one of which includes the option to tell Stefan he’s a character in a Netflix film), each series of choices will serve up a different variation. And while the movie always offers you two options of past choices to return to once you’ve reached an ending, it takes multiple viewings to tease out the possible variations, let alone the secret endings fans are still unearthing.

I found myself compelled by curiosity in my first viewing, interested mainly in seeing what would happen if I told Stefan to do something. But as the story progressed and the choices became more serious and downright evil, I was squirming. I didn’t like the choices I was offered, and I didn’t like seeing Stefan’s anguish at a particular result. At the same time, I had to know what would happen if I selected that one option...

Ultimately, I was wrestling with my own lack of control at the same time that I confronted the amount of power I was offered. It was uncomfortable, to say the least.

But that’s the point.

I was wrestling with my own lack of control at the same time that I confronted the amount of power I was offered.

Theologically, Christians believe that God is in control of the universe. We believe that his plan supersedes our own, even when we experience suffering and death. This alone proves to be a difficult idea to swallow, prompting debates on free will, predestination, and the problem of evil. At the same time, we are given the freedom (the power, if you will) to interact with and influence our environment and the people around us. The fact of the matter is encapsulated in Proverbs 16:9: “In their hearts humans plan their course, but the Lord establishes their steps.”

In Bandersnatch, God is not in control—and ultimately, neither are we. One character, while high on psychoactive drugs, releases the most cogent rant of the film, wherein he suggests that the 1980s video-game character Pac-Man is really just a metaphor:

“Do you know what PAC stands for? P-A-C: program and control…. He thinks he’s got free will, but really, he’s trapped in a maze, in a system, all he can do is consume. He’s pursued by demons that are probably just in his own head. And even if he does manage to escape by slipping out one side of the maze, what happens? He comes right back in the other side. People think it’s a happy game. It’s not a happy game, it’s a f***ing nightmare world, and the worst thing is, it’s real and we live in it.”

In Bandersnatch, Charlie Brooker’s system is in control. And he is not far from the truth when it comes to what a godless choose-your-own-adventure looks like. In fact, his perspective on humanity mirrors John Calvin’s: that given the opportunity, humankind will choose the sinful option.

However, if you believe that God is good and his plans are “to prosper you and not to harm you, plans to give you hope and a future,” then you are in a position to trust him even when you doubt your circumstances. You are in a position of faith in your sovereign savior, not in a system, and not in a viewer who just wants to see what happens if he asks you to listen to Tangerine Dream. 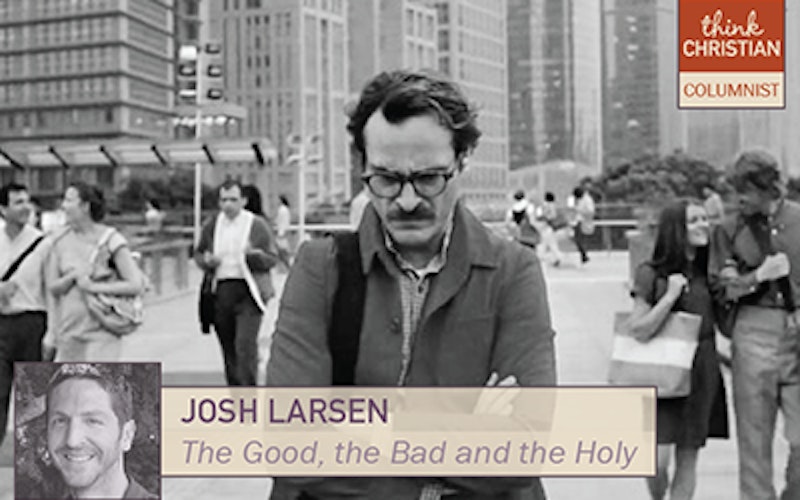 Spike Jonze’s Her and the limits of technology