Earlier this month the famous Soviet dissident and writer Alexander Solzhenitsyn passed away. I realize that this is officially Old News (it's been three whole weeks!), but I want to chat for a moment about this great—you might even say prophetic—man, and hear your thoughts about his life and writings. 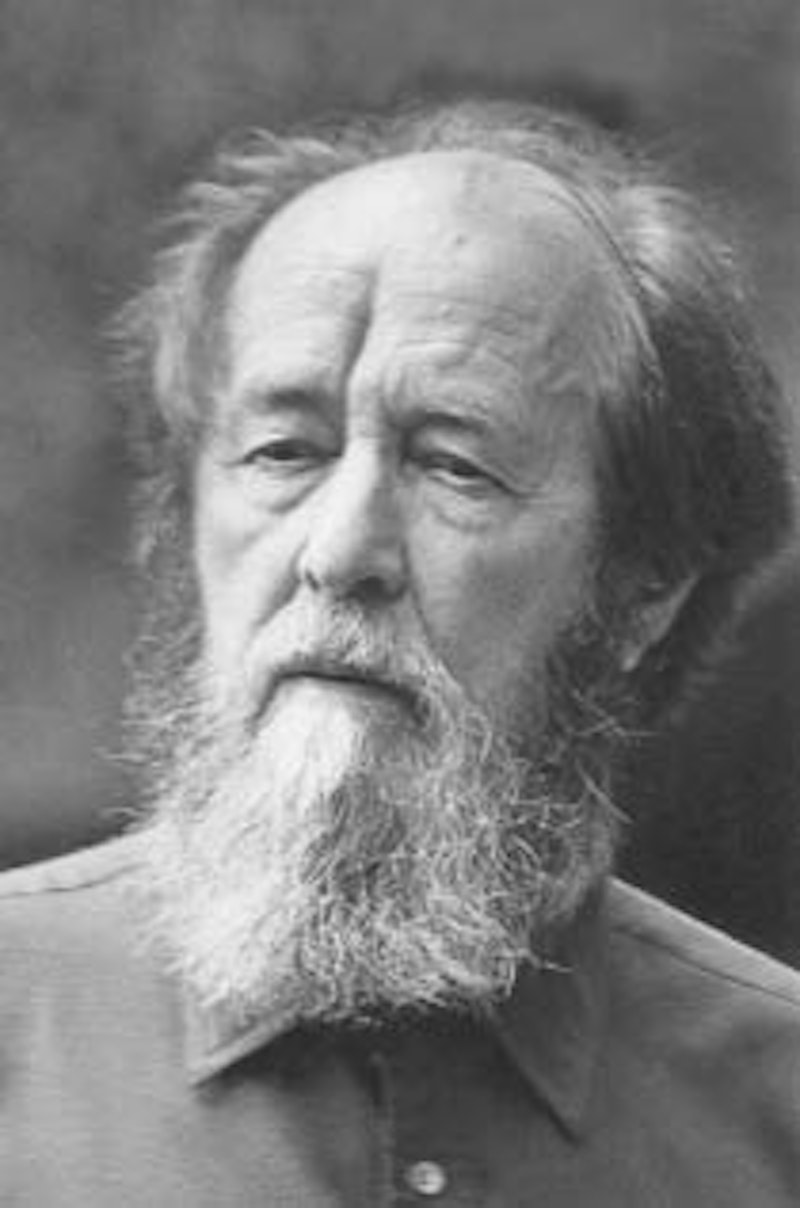 He was a fascinating man, and I think it will be some time before we're able to fully understand his place in the history of the Christian church. He was an important and outspoken critic of Soviet communism; you might expect that to have endeared him to American evangelicals, but the Western church seems to have always had a somewhat uneasy attitude toward Solzhenitsyn. I'm sure it is at least partly because he had plenty of criticism for the spiritual state of the West. A post at RedBlueChristian quotes one of his more blistering critiques:

But should someone ask me whether I would indicate the West such as it is today as a model to my country, frankly I would have to answer negatively. No, I could not recommend your society in its present state as an ideal for the transformation of ours. Through intense suffering our country has now achieved a spiritual development of such intensity that the Western system in its present state of spiritual exhaustion does not look attractive. Even those characteristics of your life which I have just mentioned are extremely saddening.
A fact which cannot be disputed is the weakening of human beings in the West while in the East they are becoming firmer and stronger. Six decades for our people and three decades for the people of Eastern Europe; during that time we have been through a spiritual training far in advance of Western experience. Life’s complexity and mortal weight have produced stronger, deeper and more interesting characters than those produced by standardized Western well-being. Therefore if our society were to be transformed into yours, it would mean an improvement in certain aspects, but also a change for the worse on some particularly significant scores. It is true, no doubt, that a society cannot remain in an abyss of lawlessness, as is the case in our country. But it is also demeaning for it to elect such mechanical legalistic smoothness as you have. After the suffering of decades of violence and oppression, the human soul longs for things higher, warmer and purer than those offered by today’s mass living habits, introduced by the revolting invasion of publicity, by TV stupor and by intolerable music.

But harsh as it is, his criticism of Western society was intended to be constructive, not malicious. The Christian History Institute's essay about Solzhenitsyn adds this:

Although greeted by much applause during its delivery, Solzhenitsyn's speech generated considerable adverse commentary in the press. To have survived the Gulag, he must have had to compromise a good deal, grumped critics. So who was he to preach at us? Solzhenitsyn apparently had expected such a reaction. In the first paragraphs of his speech he commented, " ... truth seldom is sweet; it is almost invariably bitter. A measure of bitter truth is included in my speech today, but I offer it as a friend, not as an adversary." Long before, Solomon said something about that, too. "The kisses of an enemy may be profuse, but faithful are the wounds of a friend."

Solzhenitsyn's refusal to tell us what we wanted to hear (that the Western church was the pinnacle of Christianity) forces me to take him much more seriously, even though I still wince reading those words. His criticisms remind me a lot of the words of the Old Testament prophets, who even while preaching against Israel's enemies did not shy away from pointing out Israel's own failings. And as in the case of the Old Testament prophets, Solzhenitsyn's message contained not just condemnation, but a call to repentance and restoration.

Solzhenitsyn was of course not perfect. But I don't think anyone could deny that he was an important man and an influential Christian... and that there was more than a little truth to his criticism of weak Western spirituality.

What works by Solzhenitsyn have you read, and what was your response to his writings and speeches? Did you see him as a voice crying out in the wilderness, challenging us to become purer servants of God? Were his criticisms of the West fair? And did any of his writings influence your faith?