The survival video game reminds us that religion is no longer God’s instrument when it’s used to consolidate earthly power.

What if everything you built your life around was a lie? What if your deepest beliefs, ones that you would sacrifice anything to uphold, were revealed to be manipulative tools of a selfish or deceptive elite? These questions drive Smoke and Sacrifice, one of a number of video games that present religion as a tool for the corrupt to control the innocent.

Smoke and Sacrifice is set in an imaginary world where a small, apparently idyllic village is protected from the surrounding icy wastes and the monsters that live there by a radiant metal tube called the Sun Tree. All the villagers follow a religion centered on the worship of the Sun Tree, administered by a few high priests. This is a religion that requires sacrifice, and not just a little food. Every woman’s first-born child is brought to an altar and disappears in a bright flash of light. The distraught mother is promised that her son or daughter is now in paradise.

Sachi, the game’s main character, has given up her son. Filled with doubt and regret, she consoles herself with the promises of the high priests. Then several years later, the Sun Tree seems to be failing and the village is invaded by monsters, bringing the entire sacrificial bargain into question. A mysterious wanderer suggests Sachi’s son might still be alive. Indeed, the sacrificial altar turns out to be a teleportation device that sends her below the surface, where she discovers another world—and that everything she’s been taught is a lie.

Smoke and Sacrifice is a survival crafting game, where the player travels around a hostile environment gathering components to stay alive and slowly advance in power. For instance, every night the environment fills with dangerous smoke. In order to stay alive, Sachi needs to construct a light source from a “glowfern” husk and a firefly, the latter of which she needs to catch with a net she crafts from a branch and polyp tendrils, and so on. This is a well-established genre, and a deep, superlative game like Don’t Starve probably does it a little better. But what makes Smoke and Sacrifice compelling is the world it builds.

In this world the religion that calls for sacrifice is—spoiler alert!—a conspiracy. The fascinating and dangerous underworld reveals the high priests to be liars who are using the Sun Tree to keep everyone in line. Not all of the religious leaders are the same; some feel the lies are noble and necessary, while some are manipulative egomaniacs. But they all lie. They lie in order to keep power. And Sachi has to fight them to find the truth and bring justice to her family and her village.

In Smoke and Sacrifice, religion is a tool for the corrupt to control the innocent.

This is not a new theme in video games. There are many representations of religion in the gaming world, ranging from respectful and positive to harshly critical. The theme of religion as power—and especially as deceitful, manipulative power—is a pronounced one. On the more benign end of things, countless strategy games like Sid Meier’s Civilization present religion as Marx’s opiate of the masses. (If your people are unhappy, build ‘em a temple!) Sometimes, religious figures are repulsive authority figures, like the racist preacher giving a lecture on savages in the opening sequence of Red Dead Redemption. But particularly disturbing are the cynical liars who use religion to control others, like the Church of Yevon in Final Fantasy X or Father Comstock in Bioshock Infinite.

It is easy for those of us who are practicing Christians to blow this off as just one more attack of a hostile culture against the religious. But what is particularly painful about fiction like Smoke and Sacrifice is how it reflects real life. The #MeToo movement has revealed the sins of pastors. It’s not hard to find stories of politicians mouthing pious platitudes to the faithful and living in private as if there is no God. Many churches have shown they are more concerned with their image than actual justice and love. We often put on a pious act, but fail to fully live as citizens of the kingdom of God.

In his time on Earth, Jesus called out exactly these sorts of failings. The religious leaders of the New Testament were publicly pious and zealous for God. In fact, they desired the noble goal of the restoration of Israel. And yet Jesus spoke a boldly prophetic message that was deeply uncomfortable for them, a message that suggested that religious power not harnessed to the deep love of God was dangerous and evil.

Even though he lived in a land occupied by the pagan Romans, the gospels don’t really record the Messiah going after the Gentiles with the same fury as he showed the religious establishment: “Woe to you, teachers of the law and Pharisees, you hypocrites! You are like whitewashed tombs, which look beautiful on the outside but on the inside are full of the bones of the dead and everything unclean.” For a culture focused on ritual purity, it would be hard to think of a more offensive statement. The gospel of Luke even records Jesus delivering a similar message to the Pharisee who invited him for dinner.

In exposing the religious oppression of her world, Sachi is following in this tradition. While playing Smoke and Sacrifice, Christians should be reminded that justice cannot flourish when religion is founded on a lie. Our support of our religious institutions must be well-founded. Yes, the Church is God’s instrument in this world, but recognizing that is not the same thing as saying, “My church, right or wrong.” When the church sworn to follow God starts loving power too much, we must speak prophetically to it.

As with all prophetic messages, ours must not stop at the critique. God’s promise is even bigger than battling injustice. Jesus not only punctured false power, but rebuilt the people of God into a group with love and faith and hope and forgiveness at its core. While Smoke and Sacrifice is ambivalent on the ultimate value of religion, its vision of healthy community is one shared by the gospel. Where truth triumphs, the kingdom of God is present, whether or not it is expressly acknowledged. 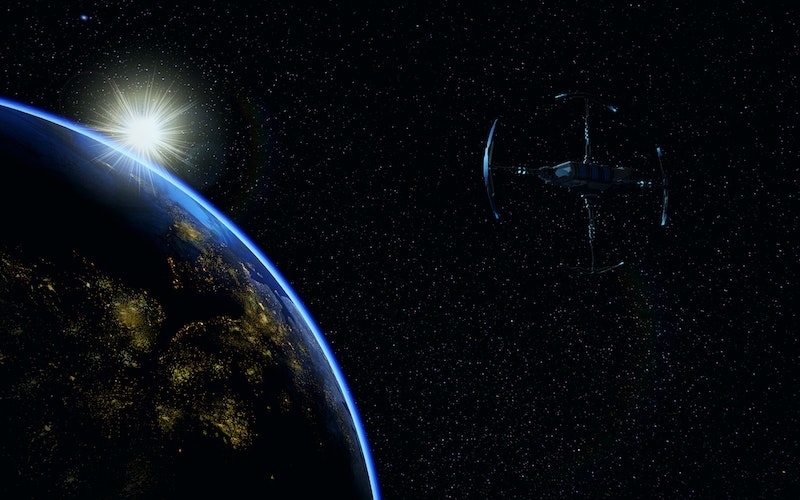 Immigrants, Aliens, and The Station