With the final launch of NASA's space shuttle program scheduled for tomorrow, the usual debates over the merits and costs of the enterprise have been revived. What are the practical benefits? Do they justify the enormous costs? Does the United States have bigger fish to fry?

All good, skeptical questions, but none can quite defuse the romantic appeal of sending a team of explorers into outer space. We tend to lose our heads a little bit about such things. Cost-benefit analyses and strategic planning fall behind the fascination that comes with encountering – even vicariously – the great beyond.

I think there’s a theological reason behind that, actually. Space exploration captures our imagination for many reasons, and one of those is that it can function as an act of worship.

Part of worship involves coming to know God better in order that our praise is more genuine, relational and sincere. That’s why we study his word during a church service while also glorifying his name in song. That intimacy allows us to lovingly praise someone, not coldly acknowledge something.

Space exploration has enabled us to meet God as a someone. Not in the way pre-space age humans may have imagined, when the heavens were thought to be, literally, heaven. Rather, the discoveries made in the last 50 years, via shuttle expeditions, the Hubble Space Telescope and more, have given us an opportunity to encounter the aspects of God's character that the cosmos uniquely reveal.

How so? At April’s Q Ideas conference, NASA astrophysicist Jennifer Wiseman discussed the ways her work has allowed her to “glean something about the nature of God.”

Wiseman spoke in particular about the phenomenon of merging galaxies, where two galaxies collide and form billions of stars over the course of hundreds of millions of years. A direct dispute to the Deist view that sees God as an uncaring architect who no longer interacts with his design, such ongoing creation suggests a cosmically involved being who is continually at work in his created world.

“The heavens are very active,” Wiseman said at the conference. “We talk a lot about how God created the heavens and earth and we get this image of the galaxies just sitting there, but no.” 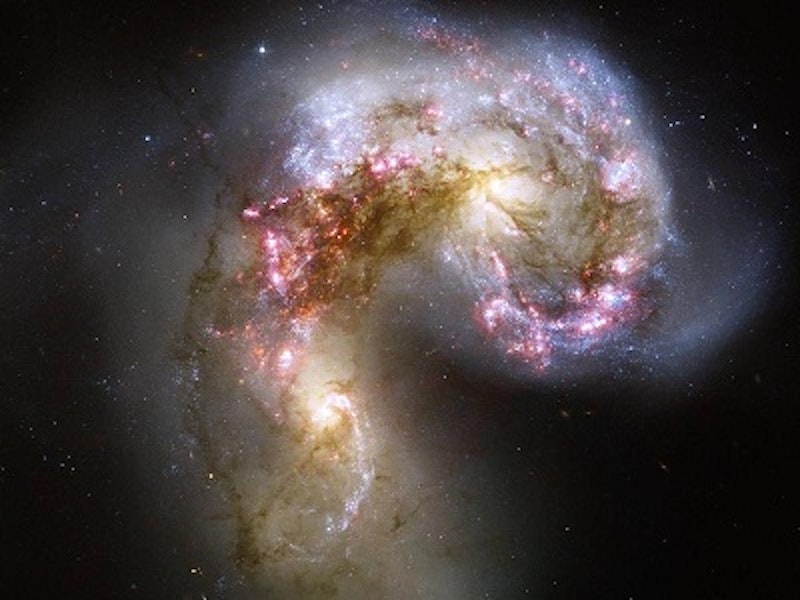 Wiseman detailed other examples of the comsos’ revelatory nature, including the way it reveals God's “enormous love of beauty.” After all, it’s not necessary for merging galaxies to resemble a swirling school of fish as seen through an interstellar kaleidoscope, but they do. We’ve also learned about God's patience. “I’ve seen things happening over scales of space and time that are unfathomable to us,” Wiseman said. And we’ve learned about his provision in the way a star creates the necessities for precious life.

Is this knowledge reason enough to justify the cost of something like the shuttle program? Maybe, maybe not. Are there less resource-intensive ways to worship? Of course. But as you cast your eyes upward when the shuttle launches tomorrow, pause to hold onto that instant when the enormity of the undertaking - and what we've learned from it - hits you. That’s a moment of worship.

(Photos of space shuttle Columbia and the merging Antennae galaxies both courtesy of NASA.)