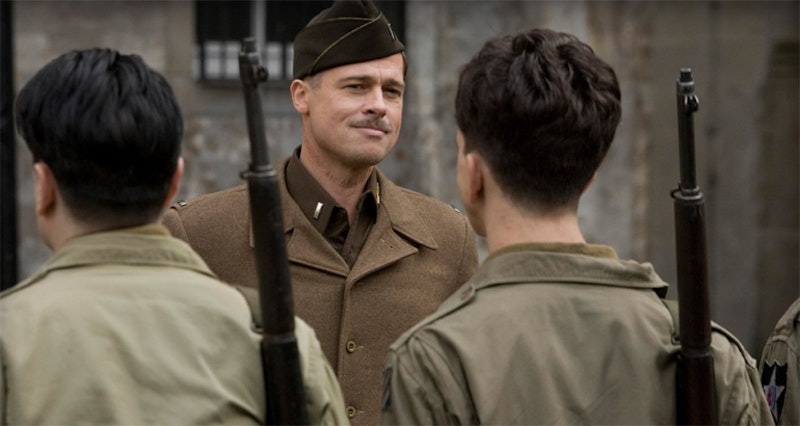 It’s probably not a question with which we really need to bother – after all, God is the one who ultimately decides these things – but watching Quentin Tarantino’s World War II fantasia “Inglourious Basterds” made me wonder: Are Nazis unforgivable?

Tarantino’s movie is so many things it makes your head spin – a war film, yes, but also a spaghetti Western, a splatterfest and a Brad Pitt comedy. Yet what the picture ultimately amounts to is a revenge movie.

Pitt anchors the film as Lt. Aldo Raine, leader of an elite crew of Jewish-American soldiers who prowl behind enemy lines scalping German soldiers. The few who are allowed to live are freed only after a swastika is carved onto their forehead, leaving a scar that will always remind them of their sins.

The movie gets more outrageous than that. I won’t reveal the ending for those of you who are still interested in seeing it, but suffice it to say Tarantino has envisioned an alternate history that offers an especially bloody, hands-on form of catharsis for anyone who thinks Hitler was a bad guy.

Considering that’s pretty much everyone, Tarantino’s movie means to intrinsically justify all of the murder and mayhem on the screen. If we’re allowed to cheer the pain of anyone, wouldn’t it be that suffered by Nazis as we watch them get their due from the very people they’ve hideously oppressed?

There was plenty of cheering, hooting and hollering in the theater I attended, which made for an extremely uncomfortable atmosphere. It wasn’t only that we in the audience were passively engaged in a cathartic act of vengeance – a sin itself - but also that we seemed to believe we had a free pass to do so, all because those suffering the violence, in this particular case, “deserved” it.

Is this a righteous way of looking at things? Are Nazis beyond redemption? To mix the movie’s metaphors with those from Christian hymns, can the Germans’ scarred foreheads be washed in the blood of the lamb, leaving them white as snow?

Not only is this ultimately God’s business, it’s also particularly difficult to answer if you have no personal family connection to the Holocaust. So I’m curious to hear what others – especially those who bear their own scars from World War II - might have to say about this issue, and about Tarantino’s film in particular.