A pointed episode of the Amazon superhero series suggests that faith built on power is no faith at all.

My phone buzzed. The text notification read, "Wow. Someone has experience with Christian conferences."

My friend had reached "Good for the Soul," episode five of Amazon's new superhero show The Boys. The series imagines thinly veiled versions of DC's Justice League (Homelander is Superman; Queen Maeve is Wonder Woman). But unlike those noble heroes, the Seven, as they're known, work for Vought, a media conglomerate that carefully manages the public faces of these powered people, who are revealed to be deeply flawed. The Boys employs our superhero obsession to comment on everything from #metoo to militarism and—especially in episode five—contemporary Christianity.

"Good for the Soul" is packed with religious imagery, but the moment that triggered my friend's text was a visit to the BELIEVE expo, hosted by Ezekiel, a super with the power to stretch (like Mr. Fantastic or Plastic Man). Ezekiel is a preacher, the leader of a church movement called Samaritan's Embrace. He's not a member of the Seven, but hosts BELIEVE in conjunction with Vought as a latter-day traveling revival. At the expo, the camera soars over a field filled with worshippers as a woman on stage sings over music that could be a U2 B-side: "Hear them now: stamping feet and hearts are proud, building like a thundercloud till heaven is within our touch…" As the music swells toward the chorus, she spreads angelic wings and her voices rises: "So take it now and raise it up!"

Shortly thereafter Ezekiel takes the stage, paraphrasing Jesus' words to Doubting Thomas: "Jesus said, ‘Hey bro, bring it in. You shouldn't need proof. You should just believe because I say so, because you have faith. People who have faith are my peeps, y'all.’" Before the crowd can contemplate this call to believe without proof, Ezekiel continues, "Let me ask you something: Why can Jesus walk on water? Why can Homelander fly?" Ezekiel stretches his arms across the stage, demonstrating his superhuman ability: "How do I get to hold the whole world in my loving embrace?" These are not rhetorical questions. Ezekiel answers, "Because we were chosen. Because we were born with this power. Because we believe."

Vought has co-opted Christianity to sell the public on superheroes. How better to explain why some are born with impossible abilities than that they're divine emissaries, sent to strengthen our faith? (The Boys does in fact offer a better explanation at the end of this same episode.)

Superhero faith is a faith based on miracles, on the supernatural. It's a faith that glorifies power in all its forms, whether literal superpowers, military might, or wealth. At the BELIEVE expo, a mere $15,000 gets you a VIP experience with Ezekiel and Homelander, where the heroes rebaptize you as one of their "most loyal followers." Homelander's sermon cites Psalm 58:10 as proof that God wants him to join America's war on terror.

We're as susceptible to a religion of miracles and power as were God's people in Jesus' day. As Jesus traveled around Galilee preaching, he performed miracles that John called "signs." He demonstrates the fourth and fifth signs back to back—feeding a crowd of more than 5,000, then walking on water to get away from them. The next day, the crowd seeks Jesus out again, asking him, “What must we do to do the works God requires?”

Jesus answered, “The work of God is this: to believe in the one he has sent.”

So they asked him, “What sign then will you give that we may see it and believe you? What will you do? Our ancestors ate the manna in the wilderness; as it is written: ‘He gave them bread from heaven to eat.’”

The crowd wants another miracle; apparently the first two they saw weren't enough. And they even have scripture at their disposal, citing how Moses, who was sent by God, gave people bread in the wilderness. And now here's another (alleged) messenger of God, in the wilderness with some people. Make with the bread! Show us a magic trick, would-be Messiah!

Jesus refuses, insisting that another sign won't save them: “Your ancestors ate the manna in the wilderness, yet they died. But here is the bread that comes down from heaven, which anyone may eat and not die. I am the living bread that came down from heaven. Whoever eats this bread will live forever. This bread is my flesh, which I will give for the life of the world.”

Superhero faith is a faith based on miracles, on the supernatural.

Jesus' refusal would baffle Ezekiel and Homelander, men who gather followers because they are better than us: more powerful, wealthier, better looking. Their superiority makes them worthy of our worship.

One who sees through their hypocrisy is Starlight, the newest member of the Seven. Starlight is a devout Christian who grew up attending the BELIEVE expo. This year, she finds herself backstage, and now that she can see how the sausage is made, she knows it's definitely not kosher.

First, Starlight hosts a roundtable with teens and her former pastor. But rather than enjoying an open, honest conversation with kids who remind her of herself only a few years ago, Starlight finds herself censored by her pastor, not-so-gently encouraged not to be truthful, but instead offer only church-approved certitudes.

She closes the expo, beginning her speech by reading from a teleprompter about how she came into a relationship with Jesus. Then she stops and goes off-script, unspooling a litany of questions and doubts. She laments evangelical certitude, the sky-high expo ticket price, and the sexual assault she suffered at the hands of another member of the Seven. This marriage of religion and power doesn't work for Starlight because she can now see how false it is, how utterly unable to transform us, or the world.

This is what Jesus warned his followers in the wilderness. By offering his body and blood, he warned them that his story doesn't lead to triumph, but to a cross. If they want a magic-trick Messiah, they aren't going to like his moment of glory.

Yet this Messiah of weakness and vulnerability is exactly what Starlight needs. Not power, but the weakness of a God who weeps with us. Not wealth, but one who became nothing for us. Not answers but—as Jesus offered Thomas—his broken body, present with us in the midst of our doubts and questions. In a violent, power-obsessed, unjust, and unsafe world not terribly different from our own, The Boys reminds us that our hope is not in a magic-trick Messiah, but the crucified Christ. 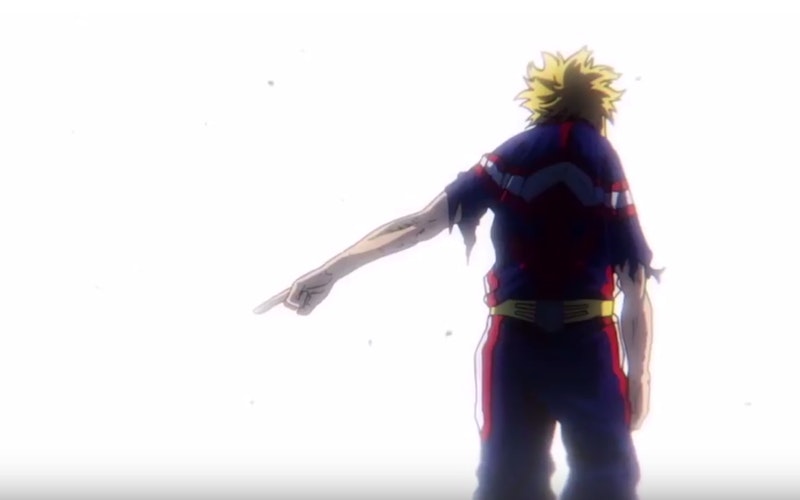 Glimpsing the Almighty in My Hero Academia’s All Might