In baseball as in the Christian life, there is no goodness without struggle. Just look at the Chicago Cubs.

I do not like the Chicago Cubs. As a son of the Milwaukee suburbs and having worked at Miller Park in high school, my blood bleeds Brewers blue and definitely not Cubbies blue. Now, living in the Chicago suburbs for school, I find myself surrounded by Cubs fanatics.  Even as a cynical observer, though, I’ll admit the 2016 Cubs’ season has been very impressive. And one reason they’ve nearly won me over is because they’ve been showing how good they are instead of telling me.

Last year, the Cubs promoted a hashtag on social media: “#WeAreGood.” This drove me nuts. Just because you say you are good does not mean you are. If you stood on Addison Street outside of Wrigley Field and yelled, “I am Superman,” that does not mean you are Superman. Granted, the Cubs were pretty good during the 2015 season, but I don’t want to be told this. I want to be shown this.

That is exactly what the Cubs have done in 2016. Kris Bryant, Anthony Rizzo, and Jake Arrieta headline one of the most talented baseball teams I have ever seen, and they let their actions on the field speak for themselves. Bryant was third in the National League in total home runs for the season. Russell has become one of the most entertaining short stops in the majors at the age of only 22. The Cubs’ pitching had the smallest earned run average of any team in Major League Baseball and had the third-most strikeouts. Their on-the-field success has nearly won me over. They no longer need to say #WeAreGood, because they have shown me that they are.

But that good would not have come if it were not for the long suffering of the Chicago Cubs. The Cubs rebuilt under Theo Epstein, who stayed the course as president of baseball operations even when the Cubs were awful. Being a general manager in Major League Baseball is one of the toughest jobs in all of professional sports. When Epstein took over in 2011, the Cubs were not good. Epstein made hard choices. He made smart trades for prospects and did not waver even when the Cubs did not find success. He knew that rebuilding the Cubs was going to be a long and difficult process. Now, five years later, the team is reaping the benefits.

In baseball as in the Christian life, there is no goodness without struggle.

Watching the Cubs, it strikes me that this is much like Christian life. One of the challenges for us as Christians is to not only claim that we pursue goodness, but to actually follow through on that claim with our actions. James 3:13 reads,“Who is wise and understanding among you? Let them show it by their good life, by deeds done in the humility that comes from wisdom.” Yet we do not always back our words up with visible proof of the “good” we are called to.

Christ invites us to suffer with him. 1 Peter 5:10 says, “And the God of all grace, who called you to his eternal glory in Christ, after you have suffered a little while, will himself restore you and make you strong, firm and steadfast.” Suffering is hard work, but it is worth it. As Tim Keller writes, “While other worldviews lead us to sit in the midst of life’s joys, foreseeing the coming sorrows, Christianity empowers its people to sit in the midst of this world’s sorrows, tasting the coming joy.”

The Cubs suffering through the bad to become good might lead them to the joy of a World Series banner. Even more, the suffering of the Christian life leads us to the joy of the Lord, which is unparalleled to any joy this earth can give us.

Joshua Coldagelli is a student assistant basketball coach at Trinity Christian College. He writes about sports and Christianity at Faith, Flannel and Practice. You can also find him on Twitter @J_ColdAsJelly. 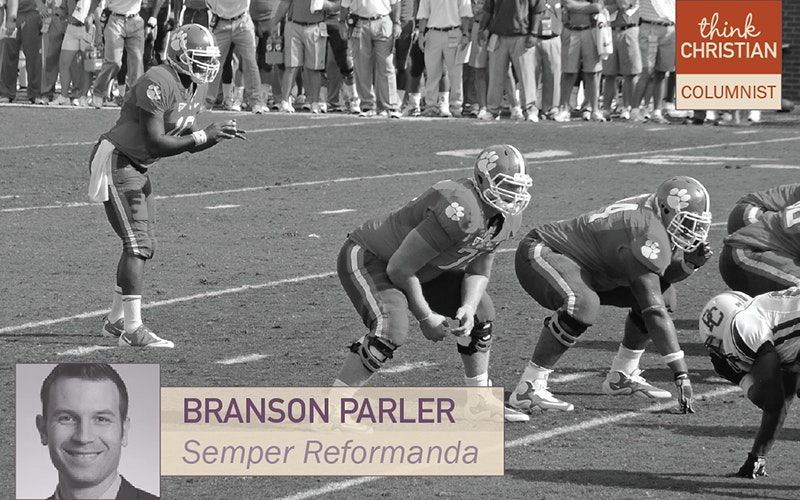 The continued shame of college sports