Is there a more anti-American sentiment than contentment?

The United States is not an easily satisfied nation. A hunger for more is built into its history, its economy and the majority of its movies. And so it came as a bit of a shock while watching Pain & Gain to realize that the film - a bigger-is-better action comedy from Hollywood titan Michael Bay - was championing, in its own subversive way, the Christian virtue of contentment. “I have learned the secret of being content in any and every situation, whether well fed or hungry, whether living in plenty or in want,” Paul wrote to the Philippians. Pain & Gain knows something of this secret too.

Based on a true story and written by Chronicles of Narnia scribes Christopher Markus and Stephen McFeely, the movie centers on Daniel Lugo (Mark Wahlberg), a Miami gym trainer whose desire for the good life outweighs his modest income. And so he devises a scheme to kidnap one of his rich clients and extort his fortune. To help, Daniel recruits a dim-witted fellow lifter named Adrian (Anthony Mackie) and an ex-con named Paul (Dwayne “The Rock” Johnson), the latter of whom found Jesus in jail yet quickly falls off the straight and narrow.

All three of these bodybuilders have been duped into believing that the American dream is easily attainable – if you’re willing to cheat here or there. The line between taking steroids and kidnapping is easily crossed, as long as glory – in the form of endless riches, expensive cars and admiring women – lies on the other side. Pain & Gain is a black comedy at heart, and much of the movie’s humor lies in watching these three muscle-bound goofballs worship, pursue and indulge in their version of the good life. “I’m hot! I’m big!” Daniel shouts to himself while doing upside-down push-ups. Their self-motivation is so relentless, it’s as if they believe that if they pause for one moment from telling themselves how successful they are, everything they have (stolen) will vanish.

By selling his usual, hedonistic vision to the point of self-parody, Bay exposes the utter vacuousness at its center.

How do I know the movie isn’t buying what it appears to be selling? After all, nearly every one of Bay’s earlier pictures - from the Transformers films to Bad Boys - glorifies the accumulation of bright, shiny things. (This is a director, after all, whose movies regularly equate women with vehicles.) Yet it’s Bay’s shallow showmanship - his hucksterism, if you will – that Pain & Gain needs, at least on the surface, in order to work as a sly satire. By selling his usual, hedonistic vision to the point of self-parody, Bay exposes the utter vacuousness at its center.

There’s another telling touch that involves a very minor character. On Daniel’s trail is a retired private detective (Ed Harris) who regularly shares details of the case with his wife, Carolyn (Emily Rutherfurd). These scenes have a quiet, unhurried domesticity unlike anything Bay has previously done. At one point, while trying to fathom the outrageous lengths to which Daniel and his gang have gone in pursuit of their fortune, Carolyn says, “Some people just don’t know a good thing when it’s staring them in the face.”

This sentiment speaks to being satisfied with whatever you might have, which isn’t exactly what Paul meant in his letter to the Philippians. Paul seems to suggest that what you have – whether you’re “in plenty or in want” – doesn’t matter, because we won’t find our spiritual satisfaction in this world. Certainly not in the speedboats and strip clubs of Pain & Gain, but also not in whatever modest means we’ve cobbled together. For Paul, contentment only comes “through Him who gives me strength.”

That’s not what we hear in Pain & Gain – even though its Paul could be described as a Jesus freak – but that’s OK. There’s something tantalizing about the way the movie subverts the macho wealth accumulation of its genre. G.K. Chesterton described “true contentment” as being “as active as agriculture. It is the power of getting out of any situation all that there is in it. It is arduous and it is rare.” All the more rare in a big-budget action comedy from insatiable Hollywood.

Josh Larsen is editor of Think Christian. He also writes about movies at LarsenOnFilm and is the co-host of Filmspotting. Connect with him on Facebook and Twitter./ Photo courtesy of Paramount Pictures, with illustration by Jerod Clark. 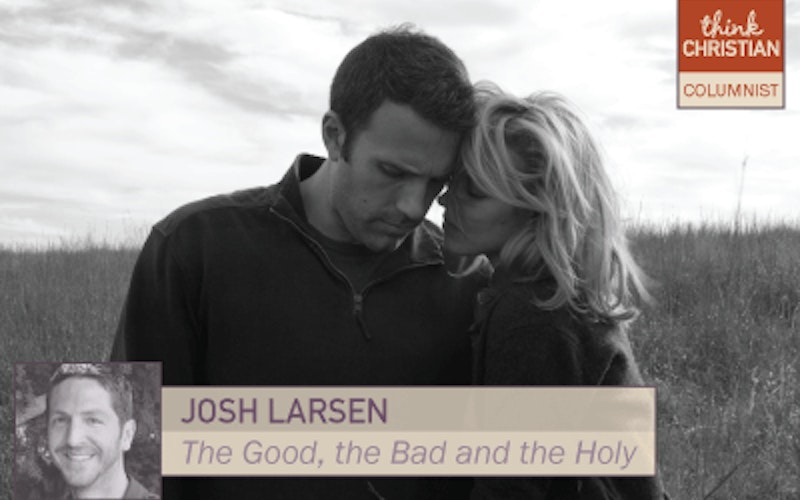