On the occasion of its 50th anniversary, we revisit the literary and theological richness of Madeleine L'Engle's fantasy classic.

To revisit Madeleine L'Engle's children’s fantasy novel A Wrinkle in Time on its 50th anniversary is to wade deep into nostalgia. Like countless others, I was absorbed by the adventures of the Murrys and their friends when I was younger. Of all the fantasy novels that lined my childhood bookshelf, I always considered A Wrinkle in Time the "weirdest" - quite a distinction, considering its peers.

Fifty years after its initial publication, the book's literary qualities and lasting appeal are clear. The writing is often beautiful; the characters are compelling; the imagination on display inspiring. (This is a book that includes space Pegasus angels, a giant disembodied brain and a kind, loveable Lovecraftian monstrosity named "Aunt Beast." A Wrinkle in Time (hereafter AWiT) never talks down to its young audience. And its parallels to contemporary culture are still challenging, even if we now apply them to different societal dangers than the reading audience of the 1960s did.

While AWiT showcases plot elements common to fantasy literature, its many points of divergence from formula are noteworthy. Unlike their peers in many other fantasy novels, Meg and her friends aren't transported into a magical world walled off from the "real world;" their adventures take place in the same universe that contains their school woes, family tension and pre-adolescent growing pains. The Murry parents aren't the distant, tyrannical or clueless adults found in many children’s fantasy novels; they're partners with their children in the battle against evil. Science is celebrated. And when the final confrontation with evil arrives at the finale of AWiT, Meg disarms evil by refusing to directly battle it at all.

These twists on standard fantasy genre plot elements explain part of AWiT’s lasting appeal. But much of its continuing relevance lies in the fact that it is theologically provocative. It is provocative in the sense that some Christians, offended by its (brief, not-elaborated-upon) reference to Jesus Christ as one of many historical human heroes, have been provoked into condemning AWiT. But there’s much more at work than shallow relativism.

L'Engle invites us to join Meg’s struggle against spiritual evil, but refuses to let us slip away from the problems of the real world while doing so.

For one, L'Engle is refreshingly honest in depicting a loving but occasionally frustrating relationship with God. Meg is repeatedly placed into dangerous situations by beings she loves and trusts, painfully aware of her own frailty and mystified that these powerful friends seemingly choose not to help. (At the evil-infested planet of Camazotz, Meg and her friends are given a pair of glasses and some iffy-sounding advice, then sent to take on an all-powerful evil giant brain.) Would it have killed Mrs. Which, Mrs. Whatsit and Mrs. Who to give Meg something more directly helpful (perhaps a magic sword or a phaser)? And would it really ruin things if God just gave us a bit more help - a higher salary, a more supporting church, better social skills, a stronger faith? Patience is a virtue that eludes Meg for much of the novel, as it often does us.

L'Engle makes no stark division between "sacred" and "secular" worlds. Christian-ish fiction and popular imagination tend to depict spiritual warfare - the clash of divine and demonic powers - as taking place in some parallel reality, invisible and intangible to our physical world. But in AWiT, angels and demons are separated from humanity by mere gulfs of traversable (once you learn how to “tesser,” that is) physical space. They’re not metaphorical or supernatural in the way we usually think of the terms. They abide by the scientific principles built into Creation, the same ones Meg learns from her scientist parents. Angels don't magically teleport through the galaxy; they use advanced physics to bend space-time, “Star Trek”-style.

Meg and her friends never leave the "real" world to fight evil. Theirs is a very concrete quest that will restore a small part of the real world (their family life) that has been thrown into disrepair. L'Engle invites us to join Meg’s struggle against spiritual evil, but mischievously refuses to let us slip away from the problems of the real world while doing so.

For much of the book, Meg struggles with impatience and feelings of impotence, volunteering for a final rescue mission more out of grim determination than hope. What keeps Meg on her quest when she feels utterly outmatched, and even let down by the grown-ups she trusts? Ultimately, it is the love she holds for (and receives from) her friends and family. We can ask ourselves the same questions: Why do good or seek justice? Why stay on the straight and narrow path day after day when it’s so difficult and seemingly unrewarding? Who do we love enough to keep us going? 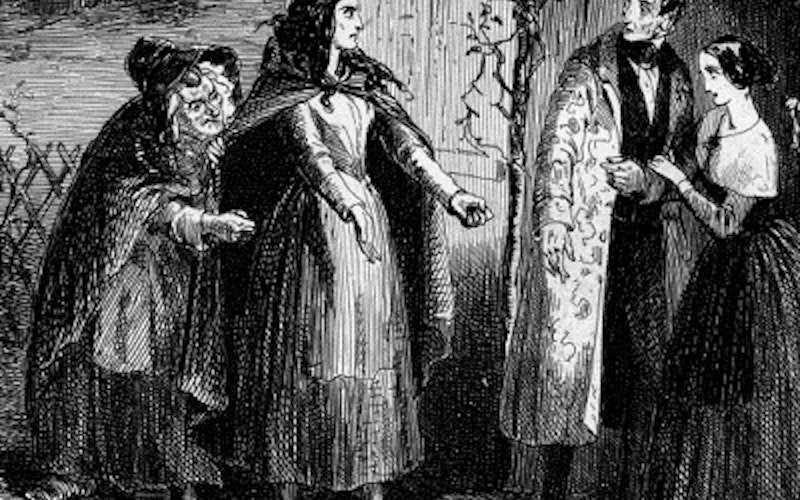 Charles Dickens and tales of Providence