Nearly every human creation myth traces life back to the sea, and to the gods our ancestors imagined dwelled beneath the waves. DC Comics’ latest incarnation of Aquaman, penned by Kelly Sue DeConnick, dives deep into humanity's myths. Her first story arc, “Unspoken Water,” draws explicitly on Genesis and other creation accounts, using Aquaman to revive an ancient debate about the nature of gods.

In Part 1 (Aquaman #43), Arthur—the once (and future?) king of Atlantis—washes up on a small island with no memory of his former life. The island is populated by a diverse, mysterious people who all claim to have been brought to the island from their faraway homes as well. We eventually learn the inhabitants are ancient sea gods from various civilizations: Aztec, Irish, Maori, Tagalog, and more. They tell Arthur the sea is dying because of their long-ago battle against Father Sea and Mother Salt, mythic proto-deities they slew when the world was young. Mother Salt has returned, intent to destroy all life, to take revenge on the gods and their children.

Mother Salt goes by the name Namma, a stand-in for the ancient Babylonian sea goddess slain by Marduk, the chief god of Babylon’s pantheon. In the Babylonian creation epic Enuma Elish, after Marduk slew her he formed from her body the cosmos as a temple. Marduk then created humanity to be the gods' slaves. The myth functioned to organize Babylonian society (and by extension the cultures they conquered). The sea goddess represents the terrifying and uncontrollable abyss that haunted early civilizations. Babylon taught that Marduk was humanity’s only hope for life and flourishing; sacrifice to him or fall victim to the deep.

The Hebrew creation story in Genesis 1 was written in the same cultural milieu as the Enuma Elish; it may even be a correction authored in the wake of the Babylonian exile. Read against the Enuma Elish, Genesis 1 makes some provocative statements about the nature of reality: the world is not a byproduct of war, but an intentional design of divine command. Humanity was not created to be slaves to the gods, but rather to bear God's divine image and serve as stewards of God's good creation.

DeConnick uses Aquaman to revive an ancient debate about the nature of gods.

It’s no accident that DeConnick’s story is called “Unspoken Water,” as it’s a direct reference to Namma, the symbolic sea goddess of the deep. In his battle against Namma, Arthur—who still has no memory of who he is or his powers—calls out instinctively, sending a telepathic signal (the "He talks to fish?" joke of Aquaman fame) that reaches the old gods on the island. Receiving it as a summons to become who they once were, they return to their ancient forms and join Arthur in battle against Namma/Mother Salt.

As humanity's ancient gods assemble to wage war on her, they become types not of Marduk, but Jesus. They give themselves up to Mother Salt, hoping with their sacrifice to appease her great wrath. But she will not be sated. And so Arthur speaks again, calling the gods consumed by Mother Salt, who burst forth from within her.

Unlike Marduk, Israel’s God need not battle the Deep. Instead, God spoke: "Let there be..." shaping the formless, filling the emptiness until a sanctuary is brought into being. So too, Arthur only spoke to Mother Salt’s unspoken waters, and from her being emerged the gods, restored to their being and purpose. Mother Salt is dispersed, and the gods reflect that their honor "is not to rule. It is to serve." Throughout the series, Robson Rocha’s powerful, emotive art has supplied most of the biblical imagery, from echoes of Moses parting the Red Sea in the first issue to Arthur's baptism in the second to the sign of covenant he receives from Father Sea in the final issue. By embodying a cast of biblical heroes, Arthur reeducates humanity's gods, modeling an awesome God who both serves and saves. 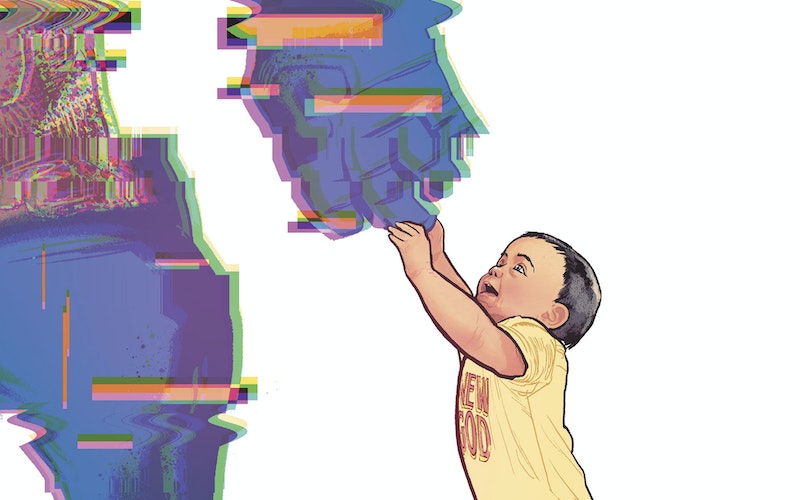